FASB and the IASB on Thursday released a proposal that would create a single revenue recognition standard for both U.S. GAAP and IFRS. The standard is designed to streamline accounting for revenue across industries and correct inconsistencies in existing standards and practices.

The new standard would also require businesses to disclose more information about revenue and proposes guidance to clarify accounting for contract costs.

The boards, in a joint press release, acknowledged the scope and complexity of revenue recognition, calling it “one of the most important and pervasive areas in financial reporting.”

The joint standard “would make it absolutely clear when revenue is recognized—and why,” IASB Chairman Sir David Tweedie said in the release. The core principle of the proposed standard “is that a company should recognize revenue when it transfers goods or services to a customer in the amount of consideration the company expects to receive from the customer,” according to an overview released by the boards.

In the overview, which highlights some of the most significant changes in the 170-page exposure draft, FASB points to four differences between current practice and the proposal. The first is that revenue would be recognized only from the transfer of goods or services to a customer. That change would affect some long-term contracts, the standard setters said. The example offered is that percentage-of-completion revenue recognition would be allowed but only if the customer owns the work-in-progress as it is built or developed.

In addition, a company would be required to account for all distinct goods or services, which could require it to separate a contract into different units of accounting from those identified in current practice. Another change would be that collectibility would affect how much revenue is recognized, rather than whether revenue is recognized. And greater use of estimates would be required in determining both the amount to allocate and the basis for that allocation, which would better reflect the economics of a transaction.

Companies would be required under the standard to disclose qualitative and quantitative information about contracts with customers, including a maturity analysis for contracts extending beyond a year, and the significant judgments and changes in judgments made in applying the proposed standard to those contracts.

The deadline for comments on the proposal is Oct. 22. The boards have not decided on an effective date for the proposed standard. According to a revised convergence schedule also released Thursday by the boards, the final standard is expected in the second quarter of 2011. The modified convergence timeline keeps the June 2011 target end date for projects that have the most urgent needs according to a revised memorandum of understanding released by the boards. “Projects we believe are a relatively lower priority or for which further research and analysis is necessary are now targeted for completion after the original June 2011 target date,” the boards said.

FASB has released a podcast featuring board member Leslie Seidman discussing the proposed changes. A live webcast on the proposals is planned for early July. For an IASB summary of the project visit the IASB website. 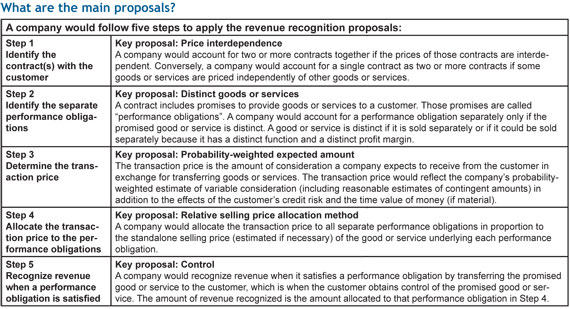