8 ways to calculate depreciation in Excel

For reasons of simplicity and brevity, the depreciation methods demonstrated in this article use only the required arguments. Several of the depreciation functions include optional arguments to allow for more complex facts, such as partial-year depreciation. 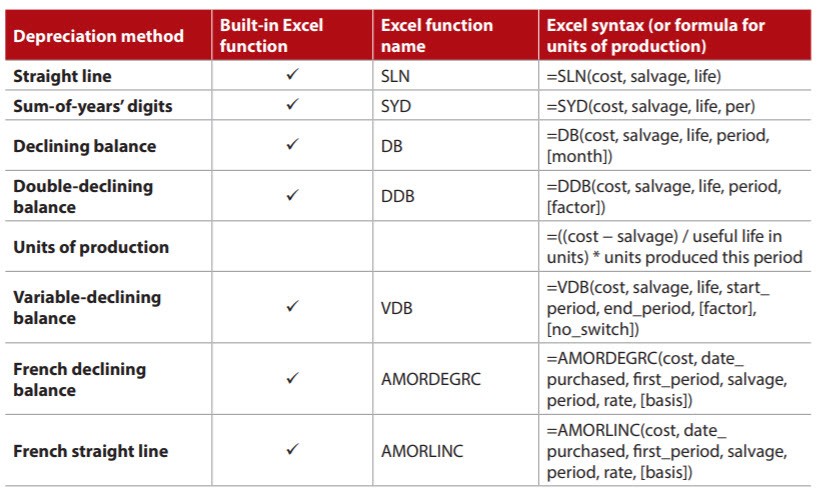 You can access the two accompanying videos here and here and a workbook with examples of using the various depreciation methods.

Note that the content that follows is based on Microsoft Excel 365 for PCs. Other versions of Excel may work differently.

4 depreciation functions and an example

All four depreciation functions covered in this section have three required arguments in common, as follows:

Those three arguments are the only ones used by the SLN function, which calculates straight-line depreciation.

The DB function is used for calculating fixed declining-balance depreciation and contains five arguments: cost, salvage, life, period, and month. The first four arguments are required, and the last one is optional. Period is required and represents the period to calculate the depreciation. As with per in the SYD function, the unit used for the period must be the same as the unit used for the life; e.g., years, months, etc. The optional argument, month, refers to the number of months in the first year. If it is left blank, Excel will assume there were 12 months in the first year.

Let's go through an example using the four methods of depreciation described so far. Assume that our company has an asset with an initial cost of $50,000, a salvage value of $10,000, and a useful life of five years and 3,000 units, as shown in the screenshot below. Our job is to create a depreciation schedule for the asset using all four types of depreciation. 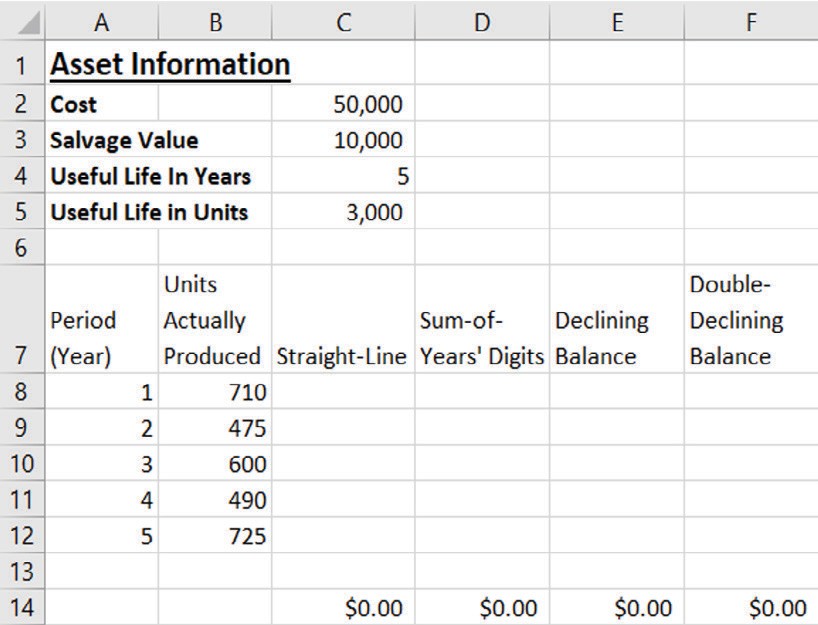 Let's create the formula for straight-line depreciation in cell C8 (do this on the first tab in the Excel workbook if you are following along). We need to define the cost, salvage, and life arguments for the SLN function. The cost is listed in cell C2 (50,000); salvage is listed in cell C3 (10,000); and life, for this formula, is the life in periods of time and is listed in cell C4 in years (5). Because we are going to copy the formula down so that it calculates the straight-line depreciation for all periods, we will include absolute references ($) in front of the columns and rows of those cells. For this example, the formula we want to enter in cell C8 is =SLN($C$2,$C$3,$C$4). Drag this formula down to populate cells C9 through C12.

The formula for declining-balance depreciation is created in cell E8. Cost, salvage, and life are defined and located as with the previous two methods, while period is listed in cell A8. Just as we did with sum-of-years' digits, include absolute references in front of the columns and rows of the cells, except for the cell describing the argument period. The arguments are exactly the same for declining balance as they were for sum-of-years' digits for this example. The formula in cell E8 is =DB($C$2,$C$3,$C$4,A8). Drag this formula down to populate cells E9 through E12.

The formula for double-declining-balance depreciation is created in cell F8. The arguments for this example are defined the same as they were for declining balance and sum-of-years' digits. The formula in cell F8 is =DDB($C$2,$C$3,$C$4,A8). Drag this formula down to populate cells F9 through F12.

If you are following along in the Excel file provided, your worksheet should look like the screenshot below. 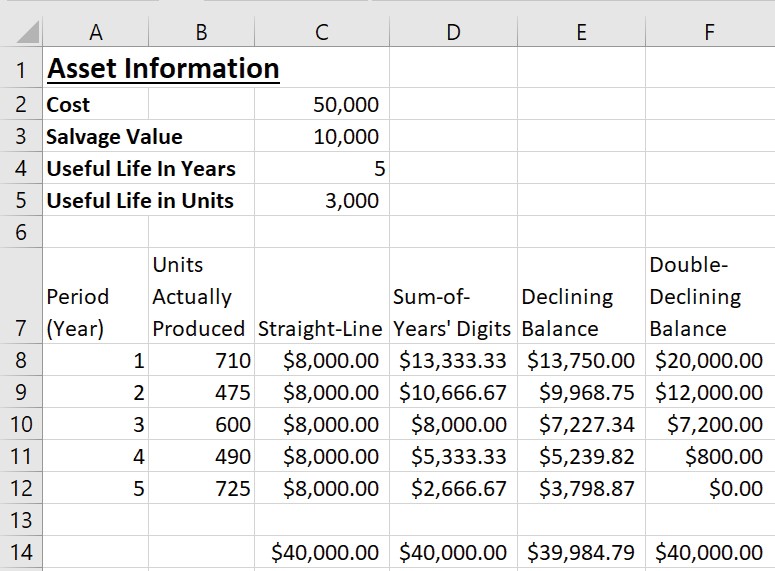 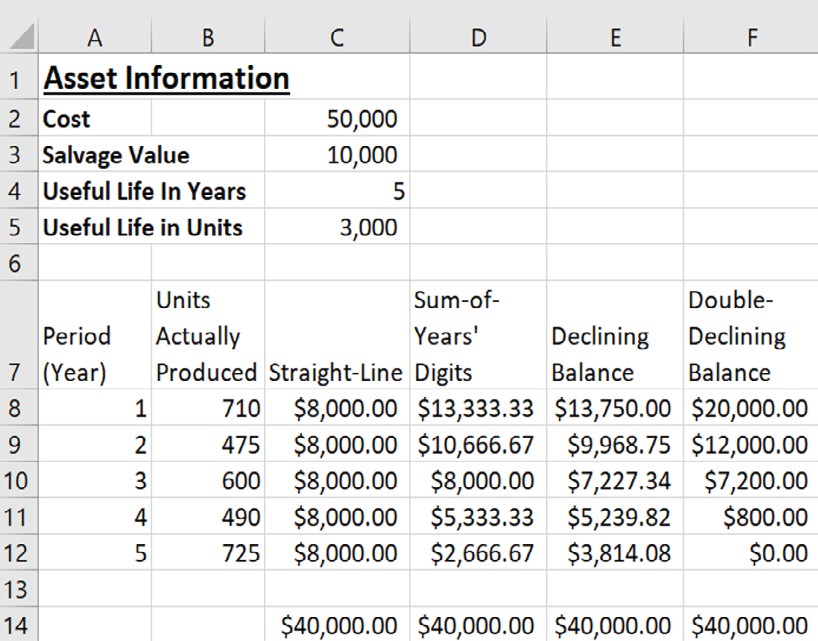 The units-of-production method of depreciation does not have a built-in Excel function but is included here because it is a widely used method of depreciation and can be calculated using Excel. The formula is =((cost − salvage) / useful life in units) * units produced in period. The first two arguments are the same as they were in Section 1, with the other arguments defined as follows.

Let's go through an example using the two methods of depreciation described so far. As with the previous example, assume that our company has an asset with an initial cost of $50,000, a salvage value of $10,000, and a useful life of five years and 3,000 units. This time, we are going to create a depreciation schedule for the asset using the two types of depreciation shown in the screenshot below. To follow along in Excel, access the spreadsheet here and go to the second tab. 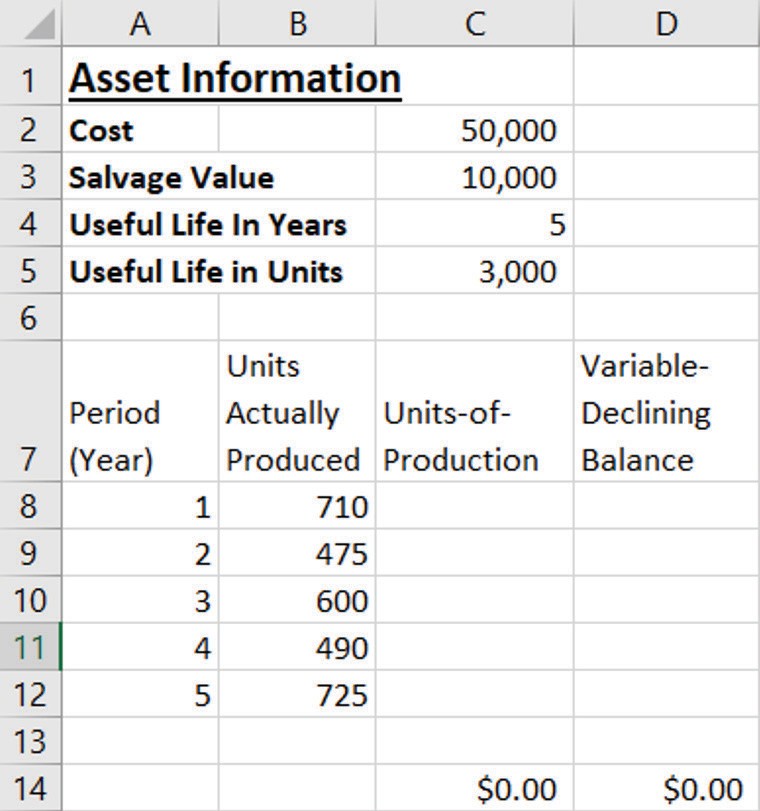 Your worksheet should look like the one in the screenshot below. 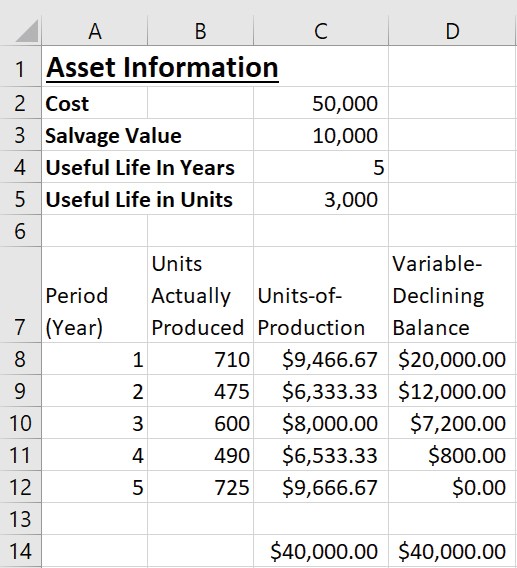 The final two built-in depreciation functions in Excel are AMORDEGRC and AMORLINC. The AMORDEGRC function calculates French declining-balance depreciation, and the AMORLINC function calculates French straight-line depreciation. The two functions contain seven arguments: cost, date_purchased, first_period, salvage, period, rate, and basis. The first six arguments are required, and the last one is optional. The arguments are defined as follows:

These two functions have the same syntax, but AMORDEGRC contains a depreciation coefficient by which depreciation is accelerated based on the useful life of the asset.

Let's go through an example using these final two methods of depreciation. Assume that our company has an asset with an initial cost of $50,000, a salvage value of $10,000, a date of purchase of 7/1/2021, an ending of the first period of 12/31/2021, a useful life of five years, and a depreciation rate of 15%, as shown in the screenshot below. Our task is to create another depreciation schedule for the asset using the two French methods. You can follow along with this example on the fourth tab in the Excel spreadsheet. 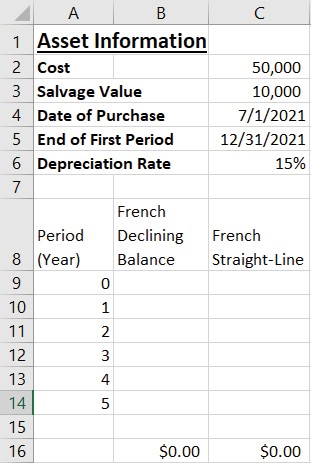 Create the formula for French declining-balance depreciation in cell B9. The syntax is =AMORDEGRC(cost, date_purchased, first_period, salvage, period, rate, [basis]). The cost is listed in cell C2, date_purchased in cell C4, first_period in cell C5, salvage in cell C3, period in cell A9, and rate in cell C6. These final two depreciation methods begin the depreciation calculation in period 0. Include absolute references in front of the columns and rows of the cells, except for the cell describing the argument period. The formula in cell B9 is =AMORDEGRC($C$2,$C$4,$C$5,$C$3,A9,$C$6). Drag this formula down to populate cells B10 through B14.

The formula for French straight-line depreciation is created in cell C9. The syntax is =AMORDEGRC(cost, date_purchased, first_period, salvage, period, rate, [basis]). All the arguments are defined the same as they were for French declining-balance depreciation. The formula in cell C9 is =AMORLINC($C$2,$C$4,$C$5,$C$3,A9,$C$6). Drag this formula down to populate cells C10 through C14. Your worksheet should now look like the one in the screenshot below. 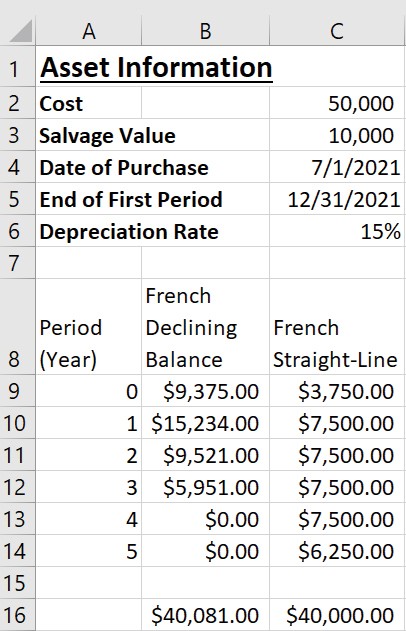 Kelly L. Williams, CPA, Ph.D., MBA, is an associate professor of accounting at the Jones College of Business at Middle Tennessee State University.