Q. My small tax practice has grown in recent years to the point where I am now swimming in tax return-related paperwork, and I need better organization. I use CCH's ProSystem fx for tax preparation, but do you have any other technological suggestions that might help?

A. Perhaps you should check out GruntWorx's Organize and Populate products (GruntWorx.com), which organize your client's tax documents and enter the data into your tax preparation software automatically. To use the Organize solution, scan your client's documents and tax receipts into a single PDF and forward that file to GruntWorx. In about an hour, GruntWorx Organize converts those documents into tabbed, searchable PDF working papers, which are indexed, bookmarked, neatly arranged, and ready for the tax preparation process.

GruntWorx Organize is available in two editions: Organize Lite, which is for Drake Software customers only, and Organize. The Organize Lite version uses a fully automated process to organize the client documents and receipts into working papers. The full Organize product performs the same function as Organize Lite, but a GruntWorx employee also reviews and validates all data.

Security notes: When using GruntWorx, you might be concerned about sending a client's tax data over the internet or the need to obtain a client's written permission to transmit data in this manner. However, GruntWorx maintains that the process complies with Internal Revenue Code Sec. 7216 and is permitted as a "preparer-to-preparer" disclosure described in Regs. Sec. 301.7216-2(d)(1). Further, GruntWorx uses encrypted communications and undergoes an ­annual security examination as outlined in Statement on Standards for Attestation Engagements No. 16, Reporting on Controls at a Service Organization. 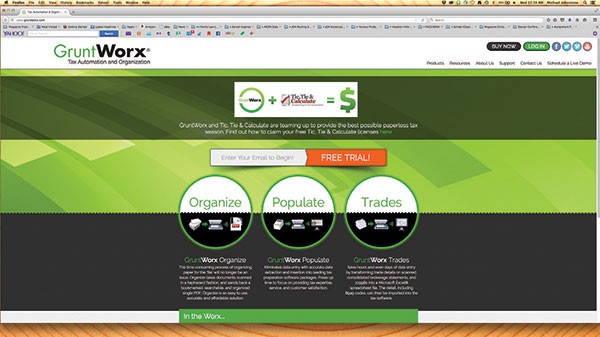