Some in the profession show their pride on their vehicles.

CPAs work hard — to pass the exam, to meet their clients' needs, to hit deadlines. Thus it's no surprise that accountants nationwide choose vanity plates to showcase (in a fun way) their successes or creativity. In 2018, we published two articles on vanity plates (one in January, one in September), and this year, we decided to do it again. Here are some of our new favorites from eight CPAs across the country: 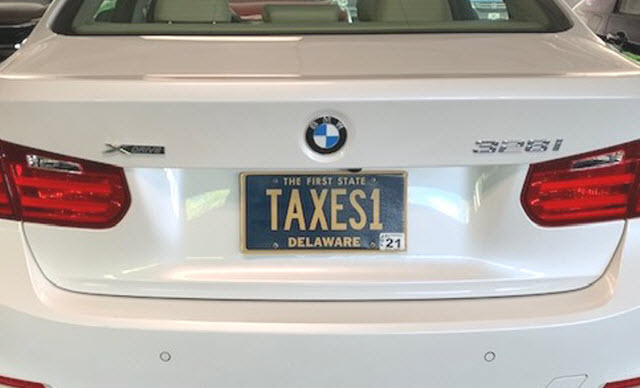 TAXES1. About 30 years have passed since Jordon Rosen, CPA, director and shareholder at Belfint Lyons Shuman, PA, in Wilmington, Del., got his vanity license plate, TAXES1, and he’s kept it ever since (“TAXES,” he noted, was already taken.) Rosen is proud of the profession, he said, so he chose a plate related to his work. (In addition, the last four digits of his cellphone number are 1040, and his personal email address starts with “DelawareCPA”). His plate, displayed on his white 2014 BMW 328i xDrive, has received plenty of attention from colleagues and clients, all of it positive. “My wife was always afraid that people would think that I work for the IRS and they would slash my tires — but that hasn’t happened,” he quipped. 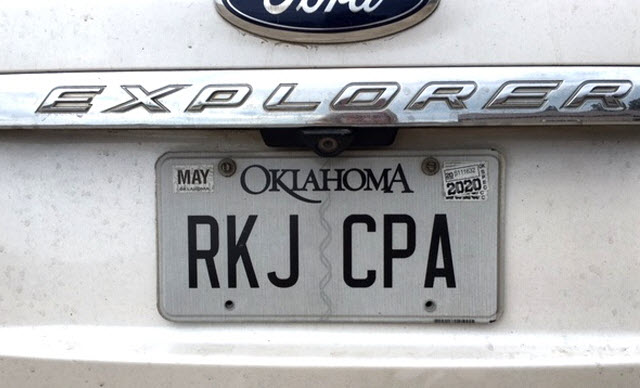 RKJCPA. Say these letters fast enough and it sounds like a football cheer. Robin K. Jolly, CPA, a founder, shareholder, and managing member of Abla & Jolly CPA, PLLC in Sulphur, Okla., selected her initials to adorn her plate but loves the combination, she said, because it’s catchy. Many people know her in her small Oklahoma town, and they recognize her white Ford Explorer. “Being a CPA, I’m proud of that,” Jolly added. “But it’s also part of my identity.” 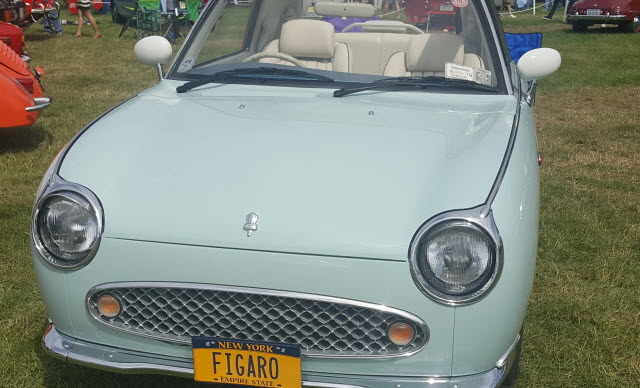 FIGARO. In his spare time away from work, sole practitioner Mitch Tanner, CPA, founder of M.R. Tanner, CPA, with offices in New York and New Jersey, tools around in his pale aqua Figaro, a small convertible made by Nissan for only one year — 1991. “A special car needs special attention,” stated Tanner, who owns three Figaros, two of which are in storage, and the third out and about with a New York plate. “People look at it and say, ‘What is it?’” he said of his unique automobile. Tanner responds: “It’s a Figaro!” 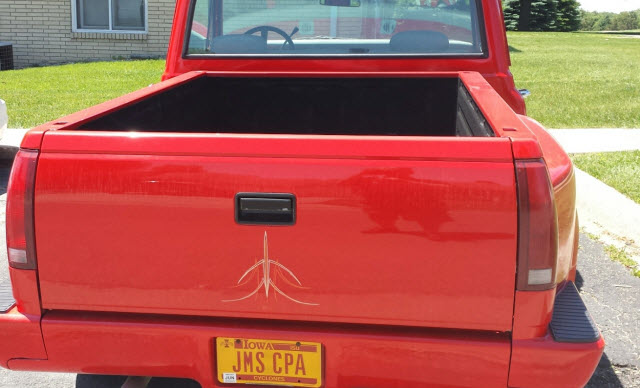 JMS CPA. Seventy-year-old John Sears, CPA, now semiretired, spends much of his time coaching young accountants at Tarbell & Co., PLC, in Prairie City, Iowa, and driving through town in his “little hot rod,” a bright red 1971 Chevrolet pickup truck. Also a Vietnam veteran, he includes his initials on his affinity plate that celebrates his alma mater. “I have transferred my client responsibility to younger people,” he noted. “But I’m proud of being a CPA, and proud of graduating from Iowa State.” 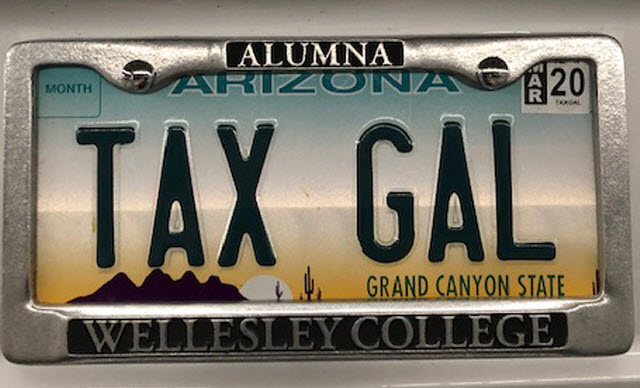 TAX GAL. Thirty years ago, Victoria “Vicki” Harris, CPA, began work as an intern at Hunter Hagan & Company, Ltd., a woman-owned firm in Scottsdale, Ariz. Today, she’s the managing shareholder. She loves tax and opted for TAX GAL when she secured her vanity plate, now displayed on her Lexus RX 350. Her partners were initially jealous of her choice, she recalled, and Harris garners plenty of interest around the city. “I can remember a guy stopping me at the filling station and saying, ‘Can you do my taxes?’” she said. 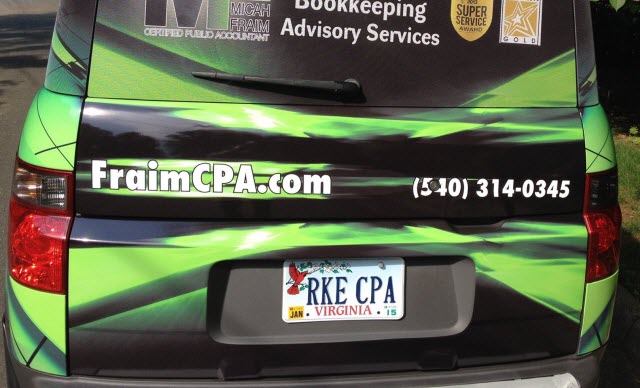 RKECPA. In 2014, one year after launching his own firm at age 23, Roanoke, Va.-based Micah Fraim, CPA, decided to go all out: He paid $2,000 for a wild vehicle wrap and secured a vanity plate noting both his location (abbreviated) and his profession. People can’t help but stare at his green-and-black Honda Element, which Fraim uses in part to market his practice. “I was trying to make my car as much of a spectacle as possible,” he said. 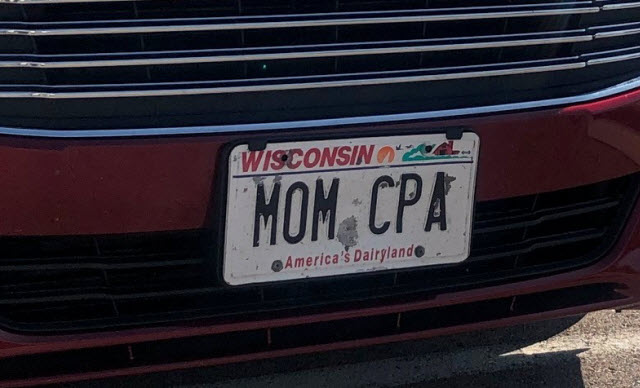 MOM CPA. Jodi Dobson, CPA, of Madison, Wis., has spent her entire career at Baker Tilly Virchow Krause LLP, where she now is a partner. Seventeen years ago, pregnant with her first child, she decided to get a vanity plate that struts her two best titles, Mom and CPA. “It’s definitely a good conversation piece,” she said of her plate, now displayed on her ruby red Ford Fusion. “I’ve actually had people at gas stations or random parking lots make comments about it.” 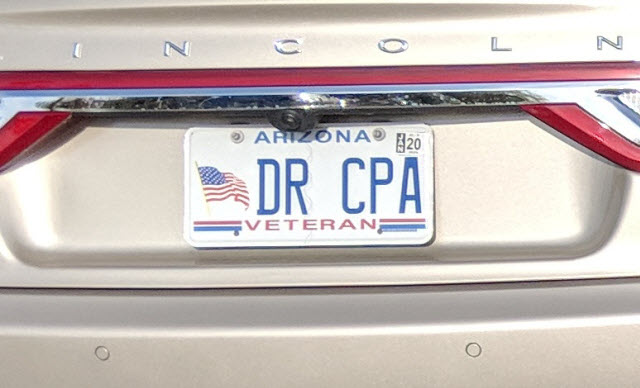 DR CPA. Two years ago, U.S. Army veteran Bob Minniti, CPA/CFF, CGMA, a forensic accountant, fraud examiner, president of Minniti CPA LLC, and instructor of CPE courses in Phoenix, Ariz., completed his doctorate in business administration from Walden University, and subsequently acquired his DR CPA plate. His friends humorously accuse him of gloating, but Minniti sticks to his decision to flaunt his credentials on his 2017 champagne-colored Lincoln Continental. “It’s not like I’m better than anyone else,” he admitted. “But I’m proud of having my credentials. Why do you want to work for them and stick them in a drawer?”

Cheryl Meyer is a freelance writer based in California. To comment on this article or to suggest an idea for another article, contact Chris Baysden, a JofA associate director, at Chris.Baysden@aicpa-cima.com.