Take this opportunity to review your clients’ Medicare elections.

Medicare is a complex system with many moving parts, and clients often find it difficult to make sense of it all. CPAs can perform an important service by understanding Medicare and helping clients make better decisions regarding their coverage. In particular, CPAs may want to revisit their clients' Medicare elections, particularly now that Part D changes are on the horizon.

Currently, in 2018 Medicare Part D beneficiaries who pay more than $3,750 a year on prescriptions but less than $5,000 are subject to what is known as the coverage gap, popularly called the "doughnut hole." That's set to change. In the past, while in the coverage gap the beneficiary paid more for drugs than while in the initial coverage limit. Recent legislation (the Bipartisan Budget Act of 2018, P.L. 115-123) will all but end the coverage gap a year earlier than scheduled.

As a refresher: In 2018, the coverage gap goes into effect for Part D beneficiaries who pay more than $3,750 a year on prescriptions. At that point, beneficiaries enter the "doughnut hole": a tier on which, in 2018, they must pay 35% of the cost of brand-name drugs and 44% of the cost of generic drugs. If their spending reaches the catastrophic coverage level of $5,000, though, they exit the "doughnut hole" and pay no more than the $3.35 for a generic drug and $8.35 for a brand-name drug or, if greater, 5% of either type of drug's cost for the remainder of the year.

To summarize, in 2019 and going forward there will be four coverage levels (see chart):

*The term includes the cost of co-payments and co-insurance for drug costs and the cost of the drug to the plan including discounts. Thus a $50 discount provided by the drug manufacturer to the plan and the plan beneficiary would be added to the drug cost and applied to the out-of-pocket spending limit. 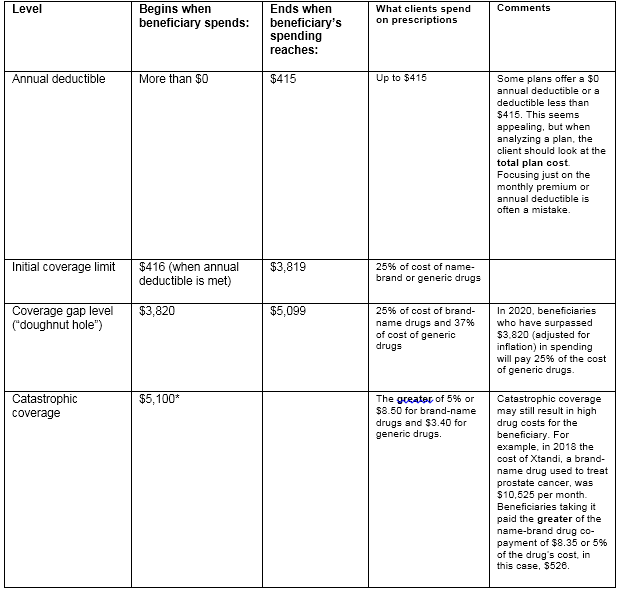 Assisting your clients with their Medicare Part D coverage issues sends a message that your concern goes beyond the financial to helping your client make better decisions regarding their health care coverage. The upcoming changes to Part D present an excellent opportunity to do so.

In The Adviser's Guide to Retirement and Elder Planning: Financing Retirement Healthcare (available to PFP Section members and PFS credential holders), author Jim Sullivan provides a complete understanding of the options facing retirees as they pay for healthcare in the early and later years of retirement. Timelines, planning tips, and client questions all make this a very readable guide.

James Sullivan, CPA/PFS, is a financial planner in Wheaton, Ill. He specializes in working with clients, and the families of clients, suffering from chronic illness. To comment on this article or to suggest an idea for another article, contact Courtney Vien, a JofA senior editor, at Courtney.Vien@aicpa.cima.com.