What it takes to become a top-performing CAS practice

The Client Advisory Services Benchmark Survey from CPA.com and the AICPA Private Companies Practice Section (PCPS) can give firms new insight into running a successful client advisory services (CAS) practice. CAS is a fast-growing area: The survey found that the median growth rate for CAS practices was 20%. The top-performing CAS practices in the survey — the 25% of respondents with the highest net client fees per professional — were found to be more likely to follow certain best practices than other survey respondents.

Firms can learn from these results, Jennifer Wilson, partner and co-founder of Convergence Coaching LLC, said while commenting on the survey during an AICPA Town Hall webcast. "This is the only survey that is measuring CAS" in this degree of depth, she said. "It can help practice leaders know where they should be shifting strategy."

Some of the factors that set top performers apart included:

Elinor Litwack, CPA, partner, outsourced accounting and advisory at GRF CPAs and Advisors in Bethesda, Md., which was one of the survey's top performers, said during an AICPA Town Hall webcast that training is something her firm emphasizes. "We believe in training — not just technical CPE but training for soft skills and leadership skills," she said. Her firm has both practice leaders and "rising stars" in the CAS area attend CAS workshops. "Everyone needs to understand the ins and outs of CAS strategy," she said.

"Top performers were ahead of the curve with cloud technology," said Phil Quimby, product marketing manager for CAS at CPA.com. During the pandemic, they thus had an easier time pivoting to remote work, he said.

He believes that offering remote work options can help firms with staffing. "We believe that practices that remain flexible rather than requiring staff to be in the office will have an advantage in recruiting the best talent," he said. "If you can recruit from the entire country (or around the world), you have a much larger talent pool."

Having dedicated CAS staff. A median of 56% of top performers had staff who worked only on CAS, compared with 43% of all respondents.

Having staff who work solely on CAS can give a practice an advantage, Quimby said. "CAS practices operate differently than other parts of an accounting firm," he pointed out. "If your staff is regularly getting pulled off to support other areas of your business, they will be less focused and not perform at the same level."

Dedicated staff, Quimby said, are more likely to acquire the knowledge needed to deliver CAS more thoroughly. "They will understand the technology, the processes, and the clients better," he said, and so are "able to develop insights and advise clients at a higher level."

A median of 88% of top performers supported three or fewer general ledger (GL) software programs, versus 79% of all respondents. Limiting the number of such programs can help firms deliver streamlined, more efficient services, as they won't need to train staff on as many programs, Quimby observed.

CAS practices need to "focus on fewer technology solutions and not try to support every general ledger," Wilson said. In some cases, that can mean helping some clients transition to different software, rather than adopting their software yourself, she said. 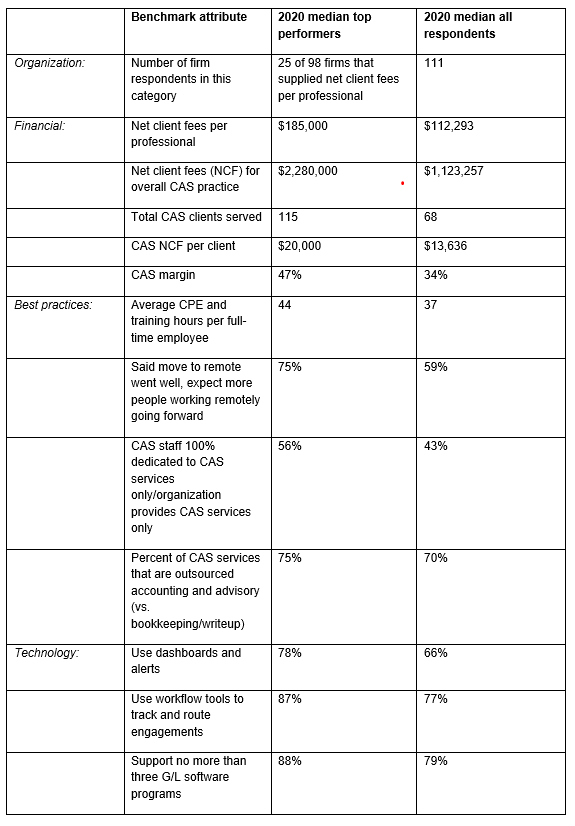 Strategies to grow your CAS practice

Register to attend a CPA.com webinar with free CPE on Nov. 30 at 2 p.m. ET to hear from top-performing practices on the opportunities this service line provides, as well as steps to build out your practice.

Get expert insights and practical strategies to take your CAS practice to the next level. Join profession leaders at CPA.com's Digital CPA Conference, Dec. 5–8. Register now to attend virtually.

CPA.com is committed to identifying key CAS trends and barriers so it can invest in the right resources and technology to help firms grow and evolve their practices. Visit cpa.com/cas to access resources including workshops, case studies, white papers, and more.