A tale of the PPP tape: Why relationship building matters

Businesses that already had a lending relationship with a bank were more likely to obtain loans through the Paycheck Protection Program (PPP), according to an analysis of PPP data through April 16 published in a blog on the Federal Reserve Bank of New York’s website.

Congress established the PPP to provide relief to small businesses as part of the Coronavirus Aid, Relief, and Economic Security (CARES) Act, P.L. 116-136. The bill, signed into law March 27, authorized Treasury and the U.S. Small Business Administration to run the program.

The CARES Act made $349 billion in forgivable loans available to small businesses that were in operation on Feb. 15 with 500 or fewer employees, including not-for-profits, veterans’ organizations, Tribal concerns, self-employed individuals, sole proprietorships, and independent contractors. Certain businesses with more than 500 employees in certain industries also can apply.

The first round of PPP funding was exhausted in less than two weeks. Congress then approved another $310 billion for PPP use.

A greater number of small businesses received loans in states that had a higher percentage of those businesses using bank financing in 2019, the New York Fed research shows. Data is not available for all states, but for the 20 with data available, the differences in approval rates are notable.

“Banks are quicker to accept loan applications from existing customers, since they already have much of the relevant information and screening is faster,” Volker and Liu wrote. 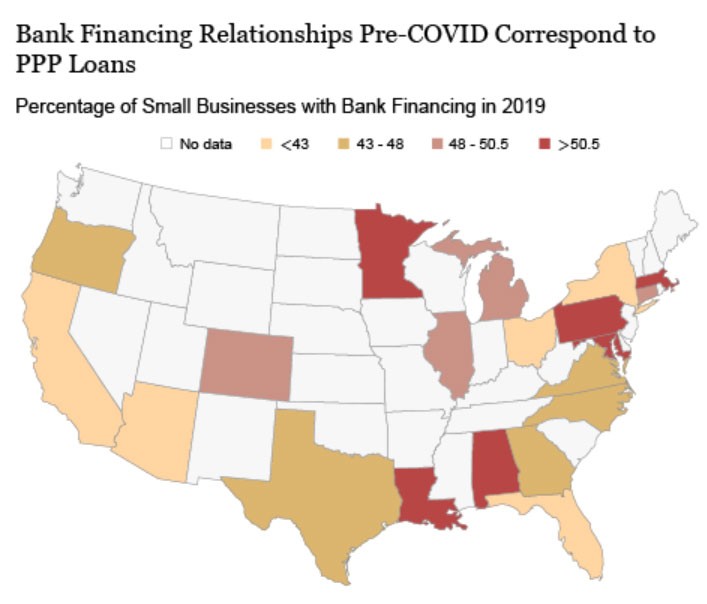 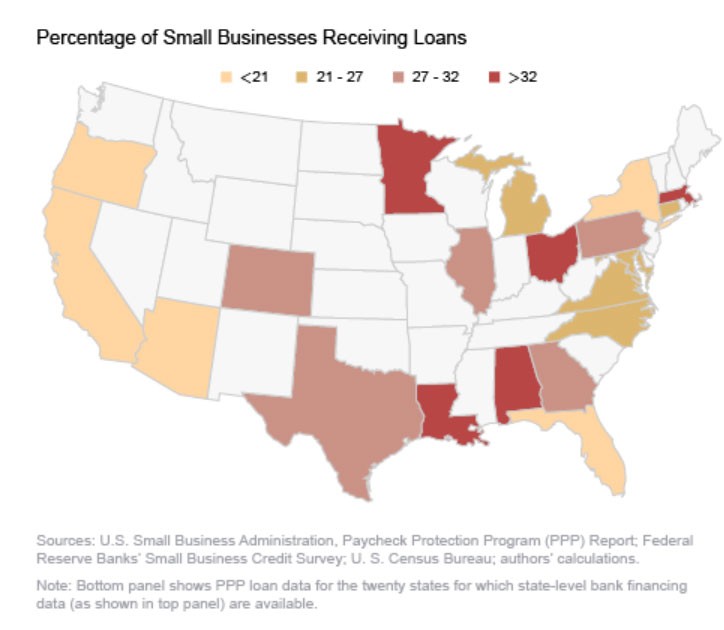 Building strong ties with lenders is sort of like professional networking — if you wait to do it until you suddenly need to do it, it can be too late. Having an established relationship with a lender is a hallmark of good business.

“You do really have to work your banking relationship as part of these programs and leverage that relationship,” said Matthew Kraeuter, J.D., of Frost & Associates LLC, a firm in greater Washington, D.C., said in an April JofA podcast about applying for PPP loans.

In New York, the state hit with the most coronavirus cases and deaths, success at landing PPP loans has been lower than many states; less than 20% of businesses there received approval. In Nebraska, 55% of small businesses received PPP funding. Data was not available for the percentage of Nebraska small businesses with 2019 bank financing, but Nebraska is a state with a relatively high percentage of deposits in community banks, nearly 40%, according to the blog, citing FDIC data. The blog mentions that the prevalence of community banks in some states could play a role in which businesses receive funding. In Arizona, California, and New York, three states among the lowest in approval rate for PPP funds, the percentage of deposits in community banks is also low, less than 10%.

The AICPA’s Paycheck Protection Program Resources page houses resources and tools produced by the AICPA to help address the economic impact of the coronavirus.

For more news and reporting on the coronavirus and how CPAs can handle challenges related to the outbreak, visit the JofA’s coronavirus resources page or subscribe to our email alerts for breaking PPP news.