Steps to take to prepare for a recession

More than 40 million Americans have filed for unemployment insurance amid the COVID-19 pandemic, according to the U.S. Department of Labor. As the United States endures a period of economic turmoil brought on by the pandemic, CPA financial planners are encouraging clients to save.

Establishing an emergency fund is the tactic that CPA financial planners most recommend Americans take to help prepare for a downturn, according to the AICPA’s Personal Financial Planning (PFP) Trends Survey conducted in May 2020. Eighty-four percent of the CPA financial planners surveyed said that starting an emergency fund would be one of the top three steps they would advise individuals to undertake.

“Building an emergency fund with three to six months’ worth of living expenses is the general rule of thumb,” said Robert Westley, CPA/PFS, a member of the AICPA National CPA Financial Literacy Commission. “This amount generally gives individuals enough time to effectively deal with an unexpected event.”

Paying down existing high-interest debt is another one of the top ways Americans can protect their finances in the event of a downturn. This step was chosen as one of the top three steps 53% of CPA financial planners surveyed said they would encourage individuals to take.

“Consumer debt such as credit cards, personal loans, and auto loans come with high interest rates, no tax benefits, and are used to buy depreciating assets,” Westley said. “This type of debt can easily compound and become a meaningful drag on one’s financial health.”

Just under half (49%) of those surveyed said reflecting on one’s lifestyle and priorities was also among the top three recommendations they’d give when it comes to preparing for the road ahead.

Of course, individuals who’ve already lost work due to the pandemic may need to make bigger changes, but those who haven’t been as directly affected should still look for ways they can save a little extra, Westley said.

“It’s important to keep in mind that large sums of money can be accumulated by small but consistent saving over time,” he said.

Ensuring that individuals’ investment portfolio matches their risk tolerance (47%) and creating a “crisis” budget of essential bills (30%) round out the top five most frequently chosen survey responses.

During a recession, many clients ask if they’re taking on too much risk, Westley said. But assessing risk tolerance and purposefully allocating assets should ideally occur before times of economic decline, he said.

Investors should ensure they have enough low-volatility assets to protect them from having to sell off equities at depressed values during a recession, he said.

According to Westley, simply analyzing one’s financial situation is the best place to start preparing for a possible downturn. Clients should begin by calculating their cash flow and determining how much goes to covering monthly bills. This process can help them boost their savings and eliminate unnecessary spending, he said. 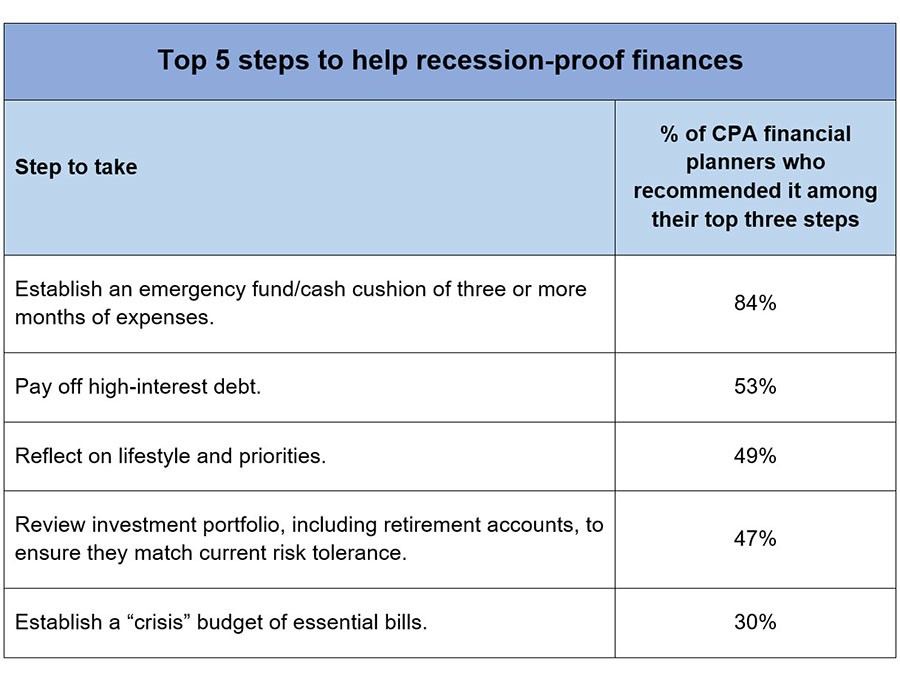 — Megan Hart is a freelance writer based in Wisconsin. To comment on this article or to suggest an idea for another article, contact Ken Tysiac, the JofA’s editorial director, at Kenneth.Tysiac@aicpa-cima.com.