Development of a significantly new approach to CPA licensure is moving forward in an effort to make sure newly licensed CPAs possess the skills and knowledge they need to succeed in the profession in the present and the future.

The National Association of State Boards of Accountancy (NASBA) board voted unanimously last week to approve the CPA Evolution project, building upon momentum the initiative gained when the AICPA governing Council voted to back the project in May.

Changes to a credential as venerable as the CPA require serious, thoughtful deliberation and planning.

“One thing I think the AICPA and NASBA did very well was listen,” said Laurie Tish, CPA, chair of the board for NASBA.

After considering several models, the AICPA and NASBA proposed a core-plus-discipline approach (see the graphic, “Core-Plus-Discipline Model”) that will require candidates to demonstrate proficiency in the three core areas of accounting, tax, and technology, plus skills in one of the following three disciplines:

In an interview with the JofA, Tish shared her thoughts on the new model — and how the CPA Evolution project will proceed.

The model is an effort to provide balance. The amount of material in accounting standards and the Internal Revenue Code has grown tremendously over the past few decades, creating a sense of information overload for CPA candidates. Meanwhile, the CPA Exam already is a 16-hour test taken in four sections, and leaders of the profession were reluctant to make it longer.

“The last thing we want to do is add to the breadth of that exam,” Tish said. “It seems that would make it less meaningful because the result would be CPA candidates who would know a little bit about a lot of things.”

The first priority in building the new model was to protect the core.

Meanwhile, as the profession becomes increasingly specialized, the “disciplines” part of the model emerged as a way to help candidates develop deeper skills in a specific area. Students surveyed by the CPA Evolution team indicated that even at a young age they already know what their passion is.

“That’s really where the concept of having a discipline that people can match to their passion [came in],” Tish said. “They can match to their courses in school, we can maintain the depth of knowledge in the exam, and we can reflect the reality of CPAs in practice today.”

There still will be just one CPA credential, regardless of the discipline that a candidate chooses.

The target date for the new CPA Exam is January 2024. Three and a half years is an ambitious timetable for the rollout of a new exam because it requires the building of a new body of knowledge that will be placed in the CPA Exam blueprints for candidates to study.

A transition plan will be developed for candidates who begin taking the CPA Exam under the current format but will finish taking the exam after January 2024. Tish expressed confidence that, leaning on past experience, a plan can be developed that would be smooth and seamless for students.

Working with the academic community is paramount. Volunteers from across academia are being engaged to develop the resources that universities and colleges will need during the transition.

“Many universities and colleges are already prepared for this,” Tish said. “They already have technology courses embedded in their curriculum. They’re already partnering outside of the school of business for technology classes that can count as business credits or accounting credits, for example. So some of them are very well prepared.”

Schools that may be lacking in resources, though, will be provided with help.

The evolution may make the CPA credential more attractive. Surveys of students indicate their interest in the CPA credential would be heightened under the new licensure model, and Tish said students who want to pursue technological pathways during their career may be much more interested.

“That’s really the hope,” she said. “And the typical accounting student will become closer to the technology. We’re really trying to meld the two, again, to reflect the reality of what’s happening in accounting firms today.” 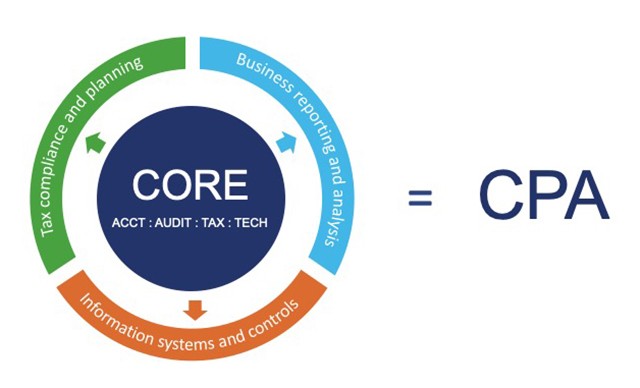