Americans’ financial satisfaction hit an all-time high in the fourth quarter of 2019, according to the AICPA’s Q4 2019 Personal Financial Satisfaction Index (PFSi). Gaining ground from the previous quarter and up significantly from its record lows a decade ago, the index was lifted to new heights by factors that included a surging stock market.

The PFSi, a quarterly economic indicator intended to gauge the personal financial standing of a typical American, reached 40.2 in the fourth quarter of 2019, up 1.6 point (4%) from the previous record of 38.6 set in the first quarter of 2019. It also rose 2.9 points (7.8%) from the third quarter.

Stock market gains, as measured by the PFS 750 Market, were a significant contributing factor to the rise in the PFSi. The PFS 750 soared 10.1% from the third quarter, reaching its own new high. At the same time, the Pain Index fell, due mainly to declines in underemployment and loan delinquencies.

The difference a decade makes

The recent results came in stark contrast to the situation a decade ago in the wake of the Great Recession of 2008, which roiled the financial and real estate markets and fueled job losses. In the fourth quarter of 2009 the PFSi measured -29.6 — or about 70 points lower than it was at the end of 2019 — due to a combination of factors such as significantly higher underemployment and much weaker stock market and job opening numbers than in 2019.

Americans' financial well-being entering 2020 vs. a decade ago 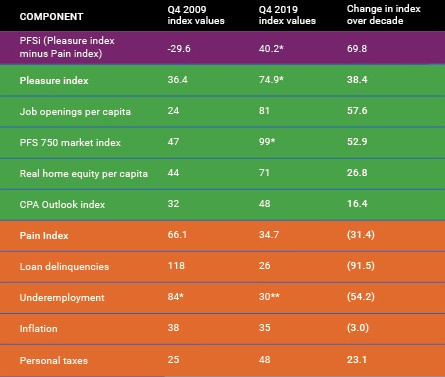 Commit to your plan

Given the market and economic fluctuations over the last decade, “having a financial plan and sticking to it is an important factor in withstanding the inevitable ups and downs,” said Mark Astrinos, CPA/PFS, a member of the AICPA Personal Financial Specialist Credential Committee.

Rather, he said, people should revise their financial plans when significant life events occur — such as a new job, job loss, marriage, birth or adoption of a child, or pending retirement — and base them on market research. In addition, especially after a strong market run-up, “people should review their portfolios to see if they still have the right mix of stocks and bonds and that they’re taking the appropriate level of risk for their circumstances,” said Astrinos, a financial life planner and investment adviser at Libra Wealth in San Francisco. Finally, he advised that the Great Recession should serve as a reminder of the importance of maintaining an adequate cash reserve and minimizing debt in case of a future downturn.

— Anita Dennis is a freelance writer based in New Jersey. To comment on this article or to suggest an idea for another article, contact Ken Tysiac, the JofA’s editorial director, at Kenneth.Tysiac@aicpa-cima.com.