Economic expectations for the United States and the world tumbled in the third quarter amid trade concerns and indications of a possible recession, according to the third-quarter Business & Industry Economic Outlook Survey released Thursday by the AICPA.

Respondents, mainly CEOs, CFOs, and controllers, are more optimistic about their own organizations than the domestic or global economy, even though that optimism also has declined in the past year. Fifty-eight percent expressed optimism in their own company’s outlook for the next 12 months, compared with 14% who are pessimistic. A year ago, 69% were optimistic about their organizations.

The CPA Outlook Index (CPAOI), an equally weighted nine-component measure, dropped to 72, down two points from last quarter, seven points from last year, and off the post-recession high of 81 in the first quarter of 2018. U.S. economic optimism was the component with the steepest decline, declining to 60, which is 19 points lower than a year ago. 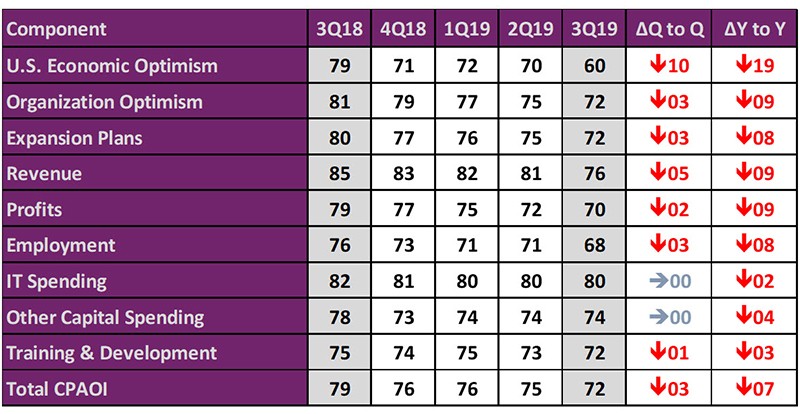 The negative effects of the trade war were obvious among survey respondents: About 45% reported some degree of negative impact, and only about 4% saw a positive change, with the rest reporting no impact.

“To me, it’s a chain reaction,” said Austin Chang, CPA, CGMA, controller for the children’s furniture vendor Million Dollar Baby Co. With each round of new tariffs, the Los Angeles-area company has had to consider additional financing to compensate for increasing import costs, and it has had to negotiate new contracts with suppliers across Asia.

For Chang and others, the prevailing message was “proceed with caution.”

“We skew conservative. A lot of spending is only budgeted when we really need it. And all the business strategies are on a conservative side in case anything happens,” he said. “We don’t sail at full speed. We have more flexibility with it until we see how we’re getting into the next phase of the trade war or the economy.”

For Namasté Solar, a Colorado solar company that designs and installs systems for homes and businesses, tariffs have created chaotic periods of rushes and renegotiations. In 2017, the initial threat of a trade war, followed by steel and aluminum tariffs, contributed to uncertainty in the market and put a freeze on investments, leading to a down solar market in 2018, said Lizette Peña, CPA, director of accounting.

Earlier this year, the 200-employee company had to renegotiate purchase orders because tariffs were retroactively applied to certain solar panels from India, increasing costs on three contracted projects. The company also is dealing with the question of whether federal tax credits will be extended this year.

“It makes it very difficult when we do projections,” Peña said, adding: “It makes for an interesting bank relationship. The secret is to really bring them along on the ride to avoid surprises.”

Concerns are especially high for manufacturers: 76% of respondents said they had been hurt by tariffs in a July survey by the National Association for Business Economics. But some, like Ohio lock manufacturer The Wilson Bohannan Co., are weathering the storm more easily.

“There are not very many locking companies left in the United States,” said Bruce Valentino, CPA, CGMA, the CFO and treasurer at Wilson Bohannon. “Most of the stuff is imported. We’re 100% American made.”

The company’s brass and stainless-steel locks are in constant demand from electric cooperatives, municipalities, and the trucking and pipeline industries. Those steady sales insulate the company from recessions, Valentino said.

But like many companies, Wilson Bohannan is struggling to keep up with staffing demands amid a long boom. In the survey, 38% of companies said they had too few employees — a drop from 44% in the second quarter.

“The killer for us and a lot of places is benefits, especially on the health insurance side,” Valentino said. The company is comparable to large manufacturers with its benefits for singles, but it’s hard to keep pace with costs for families, he said. Still, the family-owned company has been sustained by a good relationship with multigenerational employees and its union.

More than half of companies expect to expand their business in the next year: 48% of respondents said their businesses would grow “a little,” and 13% predicted “a lot” of growth. Seventeen percent expected to contract, and the rest (22%) predicted stability. The survey data is from 755 qualified responses between July 30 and Aug. 21.

“If we can make it through the next few months, you’ll probably see an uptick into early next year, and after that, my crystal ball doesn’t work,” said Mark MacNicholas, CPA, controller for Canvas Credit Union in Littleton, Colo., referring to the economy in general.

In the meantime, he said, “We have flexibility. Right now, everything seems to be going along normally. We haven’t seen any major declines in activity.”

— Andrew Kenney is a freelance writer based in Colorado. To comment on this article or to suggest an idea for another article, contact Neil Amato, a JofA senior editor, at Neil.Amato@aicpa-cima.com.