Finance leaders feel good but ready for a downturn

The Association’s quarterly survey finds that staffing is still a top worry.

Finance executives in the United States continue to feel good about growth in their respective industries, despite creeping concerns that the good times could be coming to an end in the near future.

The fairly rosy economic outlook was reflected in a survey of 844 U.S.-based finance decision-makers — mainly CFOs, CEOs, and controllers — by the Association of International Certified Professional Accountants.

The first-quarter Business & Industry Economic Outlook Survey released Thursday shows declines from the prior year in all nine components of the CPA Outlook Index (CPAOI).

The overall CPAOI is 76, the same as in 2018’s final quarter but several points below the post-recession high of 81 set this time last year. A reading above 50 indicates a generally positive outlook.

That positive sentiment is certainly being felt at Vic’s Crane and Heavy Haul Inc., a privately owned Minnesota company that handles jobs across the Upper Midwest and specializes in work at oil refineries.

“We’re having a good year this year, and we’re expecting an even better year this upcoming year,” said Jim Dutcher, CPA, the company’s CFO.

The company had record years coming out of the recession but then saw dips, bringing the company’s annual revenue down to $30 million. The last few years have seen a climb back up, with contracts for major work expected to bring in $35 million to $40 million this year, Dutcher said.

Also pleased with revenue projections is Ted Sarenski, CPA/PFS, the CEO and owner of Blue Ocean Strategic Capital, a personal finance firm in Syracuse, N.Y. Sarenski said he’s expecting revenue gains of 5% to 10%, enough to add another financial planner to his eight-person team.

That predicted uptick in revenue is shared by other financial executives, with an average increase of 4.4% in revenue reported this quarter. Profit is also expected to bump up, with margins of 3.6% predicted over the next year. That’s up slightly from the 3.4% profit projection of a quarter ago but down from the 4.4% projection from a year earlier.

Clients are seeking Sarenski’s financial services firm in large part because increasing demands in their own work mean they don’t have the capacity to plan their own financial future, he said. Low unemployment levels have also helped his bottom line.

“Employment is very good in terms of everyone having jobs,” he said, adding that there’s also more job security now than in years past.

But lessons from the recession have lingered, he said, with clients more focused on savings and planning than what he saw prerecession.

“People are more aware of the idea they need to save more themselves,” he said. “It’s not total optimism that everything is going to be great, but they’re not overly pessimistic either.”

Watching for hints of a downturn

Trade tension is not an issue that affects a majority of respondents, but it does carry concerns: 43% say they are worried about a general, global economic slowdown as a result of trade tension, up from 36% who felt that way in the third quarter of 2018. Regarding Brexit, the UK’s plan to depart the European Union, U.S. finance decision-makers mainly see a neutral impact (71%) to their bottom lines. Those forecasting a negative impact, however, rose to 16% from 4% since the second quarter of last year, the last time the question was asked.

“Trade tensions, the cooling economy in China, the looming overhang of Brexit on the United Kingdom and European Union, a series of regional conflicts — all of these have contributed to a sense of uncertainty and pessimism about the global economy,” said Ash Noah, CPA, CGMA, managing director of CGMA learning, education, and development for the Association. “On the other hand, we’re seeing a bit more of a stable outlook for the U.S. economy this quarter.”

Keeping a close eye on the possibility of an economic slowdown is Sara Smith, CPA, CGMA, the CFO of ALPS Corp., a legal malpractice insurance carrier in Missoula, Mont.

The 62-person company insures attorneys, and Smith said it generally sees an uptick of claims during economic downturns. Businesses and dissatisfied corporate clients tend to be the first wave of claims, and individuals unhappy with their legal advisers in personal matters like divorces come in a later, second wave.

“You look for something that might help mitigate that loss,” Smith said about why malpractice claims rise in rocky economic times.

But the insurance firm areas have been doing well, as they clear regulatory hurdles in additional states to offer their services. ALPS is licensed to sell malpractice policies in 45 states, and it writes policies in 38 of them, specializing in offering malpractice insurance to small legal firms in rural areas.

Smith expects revenue growth of 5% to 8% over the next year.

“We feel pretty good at least about the next year or so,” she said.

Staffing continues to be the major challenge for many companies, with availability of skilled personnel highlighted again as a top business challenge in the economic outlook survey. Other top challenges were domestic competition, employee and benefit costs, and regulatory requirements.

The staffing challenge is acutely felt at Vic’s Cranes and Heavy Haul, Dutcher said. Company officials struggle to find qualified operators, especially on what are called turnaround projects, where oil refineries are shut down for repair or service, and the crane and heavy equipment operators work day and night shifts to get the site operational as soon as possible.

While the company has a base of payroll employees who work in projects close to company headquarters, some of the company’s work is performed by union contractors who travel across the country for employment.

Vic’s had some success last year attracting the needed crane and heavy equipment operators by tacking on an additional $100 per diem for hotels and meals, an incentive the company may use again, Dutcher said.

While finding talent remains the top challenge in the survey, that issue isn’t universal. At ALPS, the Montana legal malpractice insurance provider, the firm hired two additional people in January and expects to add two to four hires over the next year.

The main reason they have success is location, Smith said. The firm is headquartered in Missoula, a university town considered the cultural hub of Montana with a steady stream of students arriving each year and people looking to stay on in the area.

Podcast: Ken Witt, CPA, CGMA, the Association’s lead technical manager for management accounting, delves further into the results, with a look at what finance decision-makers expect of their businesses in the next 12 months, as well as concerns that make them cautious. Listen now > 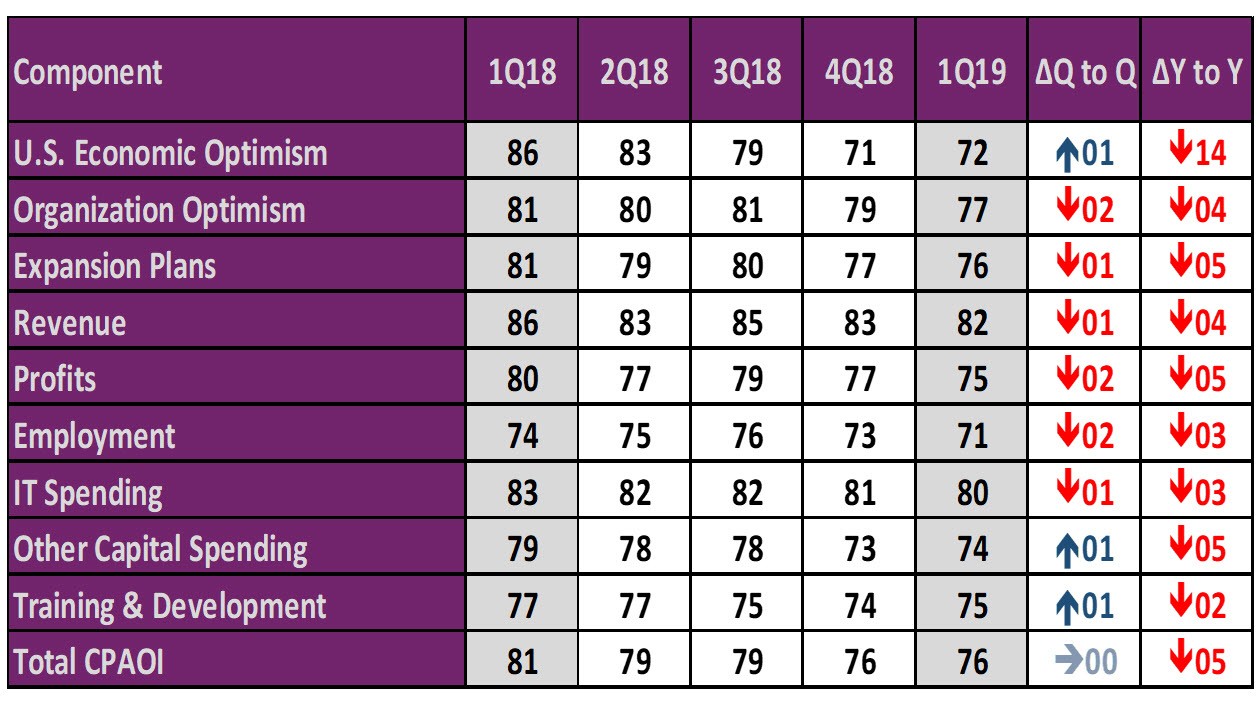 — Sarah Ovaska-Few is a freelance writer based in North Carolina. To comment on this article or to suggest an idea for another article, contact Neil Amato, a JofA senior editor, at Neil.Amato@aicpa-cima.com.