Companies plan to hire—if they can find workers

Companies appear to be pushing ahead with expansion plans and either hiring new workers or training existing ones, despite uncertainty in the run-up to the November presidential election, a new CPA survey indicates.

The CPA Outlook Index (CPAOI), a nine-component measure of economic sentiment, rose to 69 in the third quarter, up one point compared with the previous quarter. Although it is down slightly from the third quarter of 2015, the index has risen two consecutive quarters, buoyed by increased optimism about components such as profits, expansion, employment, and training. An index measure above 50 indicates a positive outlook.

The economic sentiment mirrors that of the minutes of the July 26–27 meeting of the Federal Reserve’s Federal Open Market Committee, which indicated a strengthening labor market and moderate economic expansion. The Fed left open the possibility that with continued economic growth, it would raise interest rates sometime before December. The July minutes are the most recent ones available.

The profits component of the CPAOI has risen nine points to 69 since the first quarter. Revenue, expansion, employment, and other capital spending have also risen in each of the previous two quarters.

Two-thirds (66%) of CPA decision-makers at companies with annual revenue greater than $1 billion plan to expand business in the next 12 months, up from 56% a year earlier.

But availability of skilled personnel could hamper those plans. That was among the three biggest challenges listed by finance executives in the survey, up two spots from the beginning of 2016.

Dennis Durkin, CPA, the CFO of Trend MLS, a real estate listing service near Philadelphia, has struggled to find specialists such as software developers or engineers, but now the talent drain has extended to jobs in the company’s support center.

“We’ve found it difficult to get people with good customer-service skills who could take a tough phone call,” he said. “You hire one, and two leave.”

The company is focusing on retaining current drivers and attracting new ones. But it faces an uphill climb. Ruby said the industry has more older drivers than younger ones to step in as replacements. In response, Melton has instituted training and mentoring programs for newer drivers.

One benefit it plays up to potential office staff: A 77,000-square-foot facility with a fitness center and restaurant that opened in the spring of 2015. The facility is more than three times the size of Melton’s previous headquarters and gives the company space to expand its 1,200-truck operation.

About the survey and the CPAOI 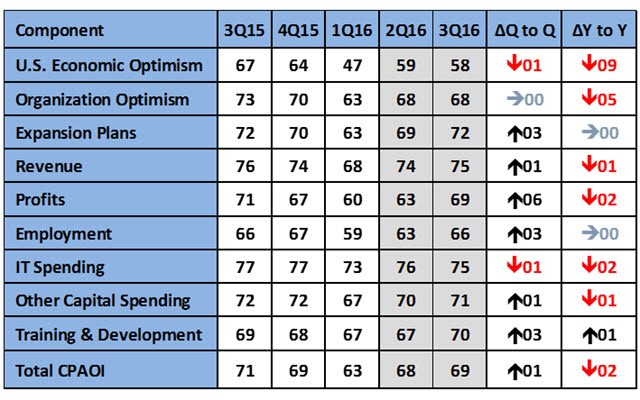