How to find time to study for the CPA exam 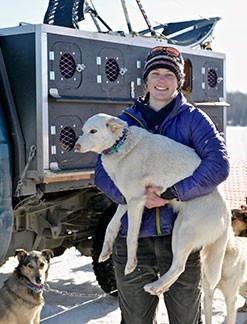 Ryne Olson, who runs a dog-racing team in Alaska, is studying for the CPA exam. (Photo by Matt Hage/AP Images)

Ryne Olson knows what it’s like to be busy.

She works at Feniks & Co. LLC in Fairbanks, Alaska. When she’s not there, she’s running her own dog-racing team, Ryno Sled Dog Kennel. And earlier this year, her team competed in the Iditarod, the premier dog-racing event that spans the more than 1,000 miles between Anchorage and Nome in Alaska.

To top it all off, Ryne still needs to complete the CPA exam before she can earn her CPA license. But with all she has to do, how can she possibly find time for studying?

With four sections and a total of 14 hours of test time, the CPA exam isn’t the kind of test you cram for. Here are some time management tips from Olson and another accountant who recently passed the exam that will help you prepare for the test.

Olson said that structure is key. Fortunately, that’s something that owning a dog-racing team helps with. She gets up early in the morning to feed the dogs and clean the yard, a process she repeats at night. That structure helps eliminate procrastination.

“There’s no sleeping in until noon, watching Netflix for an hour, and then saying, ‘I guess it’s time to get up and do something,’ ” she said.

Of course, not everybody races dogs. But having an activity that jump-starts your day is important, Olson said. That could be something as simple as going out for a run or walk or having coffee. Once you have established a structure, it’s easier to plan the activities that you’ll build your day around. In turn, you can structure those days—including studying goals—into weeks and, ultimately, into the months leading up to the exam.

Genna D. Notareschi, a CPA at Schroedel, Scullin & Bestic LLC in Ohio, just passed the CPA exam this past November. She agreed that it’s important to develop a schedule.

That one day off was important for maintaining her relationship with friends and family.

“If other friend/family events came up throughout the week, I really had to evaluate if I was able to sacrifice the study time to attend,” she said.

Her loved ones always understood if she couldn’t make it, she said. But if she could attend on a study day, she would try to go for a shorter period of time, or she would make up the study time at another point in the week—perhaps her originally planned day off.

That’s what worked for her. Since everybody is different, it’s important to develop and commit to a personalized plan.

“I think that’s another key to success in passing these exams. No matter what your study schedule is, once you’ve set your schedule, you really need to stick to it,” she said.

Olson agreed. She took a section of the exam last summer and failed.

“That was part of the mistake that I made last year,” she said. “I did not stick to that schedule.”

As for study materials, Notareschi said a good way to squeeze in some extra studying is to listen to exam lectures on audio. She bought some lectures in which an instructor would read CPA exam notes—allowing her to study on her commute to and from work. And listening to study materials may have some advantages over reading them, she said.

“Just think about when you’re listening to music in your car,” she said. “You memorize lyrics without even thinking about it just because you hear them so many times.”

Olson found Wiley CPAexcel to be a helpful tool, but she said many products are available to help an exam taker though the experience.

“One thing they all have in common is you can say what day you’re taking the exam, and they will help you lay out a schedule of how many hours per week or per day you have to study,” she said. “And then you just have to stick to that schedule.”

“My workplace was extremely helpful and accommodating during the time I was studying for the exams,” Notareschi said.

She was encouraged to bring her study materials to work and dig in during any periods of downtime. She also had mentors at work she could talk to—people who’d been through the stress of the CPA exam before and could relate to what she was going through.

Some firms also will help out by paying for review courses and exam fees—and may even offer a bonus for passing the test.

Either way, get ready for a lot of studying. The CPA exam may very well be the hardest test you ever take. But Notareschi said it’s worth it.

“Once you have your license, it’s yours forever,” she said. “As long as you keep up with your continuing education.”

Alex Granados is a freelance writer based in Raleigh, N.C. To comment on this article, contact Chris Baysden, AICPA senior manager–newsletters.