Long wait times to reach an IRS representative on the phone shortened somewhat this filing season, compared with 2015, but the quality of the IRS’s responses is lacking. Overall, a new AICPA survey shows satisfaction with the agency’s service remains low: 43% of those surveyed indicated they were either somewhat or very dissatisfied with the level of service they received during the past tax filing season.

The survey of AICPA members, conducted in April, received 3,572 responses.

When asked how often they were able to reach an IRS representative on the Practitioner Priority Service (PPS) line, 76% of respondents said they reached a representative at least “sometimes,” “most of the time,” or “always.” Another 24% said they “never” or “rarely” reached someone, a slight drop from almost one-third last year.

However, only one-third reported that they could get an answer to their question on PPS at least “most of the time” without being transferred to another agent. AICPA Tax Executive Committee (TEC) Chairman Troy Lewis, CPA, CGMA, raised this issue at a recent forum hosted by the national taxpayer advocate to discuss the IRS Future State: “To ensure that we have meaningful access to the IRS, the agency needs to regularly provide a systematic, reliable, and economical source of training to their employees. … This lack of training often results in poor customer service.”

Delayed responses to written communications remain a major issue for AICPA members. Asked what change would have the most impact on their practice, “efficiency in responding to written communications” was the most popular answer. The delays in responses can create tension with clients, observed sole practitioner Jeffrey Porter, CPA, former chair of the TEC. “They can’t understand why it takes six months … to solve a very, very simple problem.” The good news is that Porter emerged from recent meetings with members of Congress and IRS Commissioner John Koskinen feeling positive that “the problem is being recognized and the IRS is moving to deal with it” by allocating more resources.

The declining level of IRS service prompted the AICPA to fly CPAs to Washington in February to voice the profession’s frustrations and discuss solutions (see prior coverage).

Concerned about the impact of IRS service reductions on taxpayers and tax practitioners, the AICPA Council adopted a resolution last year urging policymakers to create a forum to “make recommendations that enable the [IRS] to achieve its stated mission and to transform it into a modern-functioning, evolutionary, and respected federal agency for the 21st Century.”

Yet, survey respondents seemed wary that the IRS is currently heading toward that goal; only 16% somewhat or fully agreed that the agency was on the right path to becoming a modern-functioning agency.

“I think what would help is if they [the IRS] get the input to come up with a detailed plan” that would give Congress the assurance it seeks before approving additional funds, said Annette Nellen, CPA, J.D., vice chair of the TEC. Nellen, who also participated in February’s fly-in, noted that the need to develop both long- and short-term solutions was widely recognized by the IRS and lawmakers.

What change at the IRS would make the biggest impact on your practice? 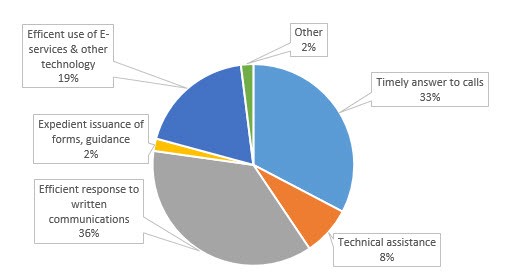