That combination has produced the lowest level of business confidence in more than three years, according to a survey released Thursday by the AICPA.

Early in 2015, 68% of CPA executives were optimistic about the U.S. economy in the quarterly Business & Industry Economic Outlook Survey. But global turbulence and low oil and commodity prices are among the factors cited by the growing number of pessimists in the most recent survey. The dimmer outlook about the domestic economy has paralleled a drop, in five consecutive quarters, of the CPA Outlook Index (CPAOI), a composite measure of nine equally weighted indicators.

Each indicator dropped on a quarterly and annual basis: U.S. economic optimism, organization optimism, expansion plans, revenue, profits, employment, IT spending, other capital spending, and training and development. That led to an overall CPAOI reading of 63, down from 69 last quarter and down 11 points from last year. The last time the index was this low was when it hit 59 in the fourth quarter of 2012.

An index reading above 50 indicates a generally positive outlook.

The outlook on the U.S. economy was 47, down from 80 during the same period a year ago. That’s the lowest level recorded since 2012.

The decline in sentiment among CPA executives reflects several factors highlighted in minutes from the Jan. 26–27 meeting of the Federal Open Market Committee, which noted:

William Dudley, president of the New York Federal Reserve, said Tuesday in China that he is less confident about his outlook for the U.S. economy. He expects U.S. GDP to grow about 2% this year. But, he said, “I see the uncertainties around my forecast to be greater than the typical levels of the past.”

Generally, executives in the AICPA survey are more optimistic about their own businesses’ near-term future than about the domestic economy. But organizational optimism continues to fall: 44% are optimistic, the lowest percentage since the fourth quarter of 2012.

Twelve percent expressed optimism about the global economy. Although that sentiment is not part of the CPAOI, it’s clear that global concerns have helped drag down the mood in the United States. While 64% of CPA executives expected their businesses to expand a year ago, just 52% predicted expansion for the coming 12 months.

Spending for information technology, training, and other capital expenditures is lower than in the first quarter of 2015. Training costs, for example, are projected to rise 1.1% in the coming year, compared with 1.6% a year ago.

Stagnant or declining markets, a challenge not listed among the top 10 in the fourth quarter of 2014, rose to third this quarter, followed by domestic competition and availability of skilled personnel. 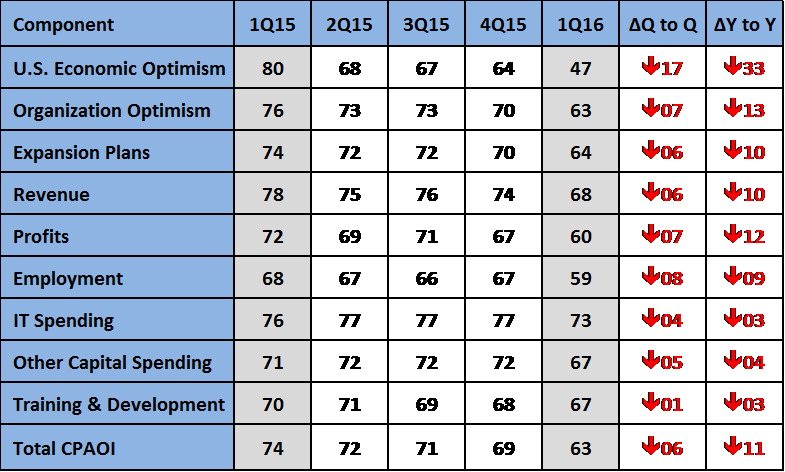