Optimists and pessimists about the U.S. economy’s next 12 months both cite election results as reasons for their feelings, but in the latest quarterly survey of CPA decision-makers, optimism reigns now that Donald Trump has been elected president.

The fourth-quarter Business & Industry Economic Outlook, released Thursday by the AICPA, shows a gain across each indicator in the CPA Outlook Index (CPAOI).

Optimists about the U.S. economy outnumber pessimists nearly 6 to 1 in the fourth quarter, helping the overall CPAOI hit a mark of 74 (see chart below). Only twice has the index, a nine-component gauge of economic sentiment, been higher in the eight years it has been measured.

One unnamed respondent who was very optimistic about the future of the U.S. economy gave this reason: “Too much federal regulation. The election of Donald Trump will change this fact and will translate into real economic growth.”

Regulation is a longtime pain point for CPAs in the survey, regularly sitting atop the list of challenges for organizations. The only time recently that regulatory requirements were not No. 1 on the list was when the domestic economy took the top spot, in the first quarter of 2016. Overall sentiment took a big dip then, but it has risen each of the past three quarters in the survey.

U.S. economic optimism has been the main driver of the CPAOI’s fall and rise recently. Sentiment about the domestic economy dropped 17 points from the fourth quarter of 2015 to this year’s first quarter, and it rose 18 points between the third and fourth quarter.

Election results aren’t the sole impetus for a positive or negative outlook among finance executives. New business in the form of commercial customers is one reason John Fruhwirth, CPA, CGMA, is optimistic about Archon Woodworks Inc. The company, based in Nebraska, sells to manufacturers and remodelers the wood components for kitchen cabinets.

He said consumer sentiment is positive, which can lead to more people buying houses or improving existing ones.

“We don’t sell directly to the end user, but we’re highly sensitive to people’s decision to buy a new house or to do a significant remodel of their kitchen,” said Fruhwirth, the company’s president. “We watch consumer sentiment measures fairly closely. We believe the upturns there bode well for our business.”

Archon has recently entered the market for high-quality wood tabletops in restaurants and bars.

“We think diversification will help us in the inevitable next downturn,” Fruhwirth said.

But he is guarding against too much post-election positivity.

“While we are optimistic, we’re going to be as cautious as we can be in expanding to meet the growth but not over-expand,” Fruhwirth said. “While the risk of the elections was taken care of by the election, new risks are out there. We presume it may be a better business climate, but we also are mindful that things can change.”

At Hayles & Howe, a spinoff of the U.K. firm with the same name, CFO Joselin R. Martin, CPA, CGMA, said business at the Maryland company is on the rise. Coming out of the recession, Hayles & Howe, which supplies ornamental plasterwork, had just a four months’ backlog—agreed-upon work that had yet to be started. Today, that backlog has more than doubled and is still rising.

“We are seeing a lot of planning,” she said. “You’ve got to have people planning and getting their financing in place. So, in our industry right now, it’s looking like there is funded work down the road.” Most of the company’s work is restoration of government and business properties, such as Union Station, a train hub in Washington, D.C. Hayles & Howe’s pigmented plaster resembles marble, and it’s a feature in many courthouses and museums and some homes.

“Our job growth is coming from an immigrant population,” she said. “My caution with respect to the outcome of the election is making sure that the people are treated fairly and that the people who want to come in legally have the opportunity to do so.”

About the survey and the CPAOI 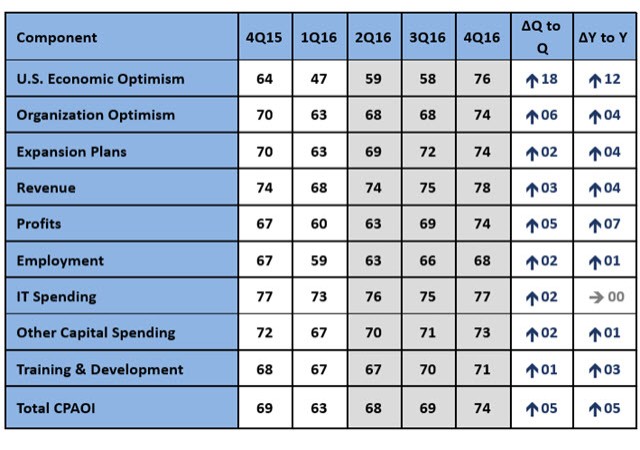