It’s been a long time, but U.S. accounting firms are again dealing with a full-fledged talent shortage.

That’s one of the main takeaways from the 2015 Private Companies Practice Section (PCPS) CPA Firm Top Issues survey, which found staffing issues leading the list of concerns for accounting firms of all sizes except sole proprietors.

For firms with one professional, the sole proprietors, “Keeping up with the changes and complexity of the tax laws” took the top spot for the third straight time in the biennial survey.

The staffing issues echo the concerns of accounting firms before the last recession hit in 2008. From the inception of the PCPS Top Issues survey in 1997 through 2007, staff recruitment and retention ranked as the most pressing priorities for accounting firms with more than one professional. Client retention surged to the forefront in the 2009 survey as firms struggled to survive the recession. By 2011, firms were focused foremost on signing new clients. Succession planning emerged as a wide-ranging concern in the 2013 survey as firms turned more attention to long-term growth strategies.

Now firms find themselves fighting to hire and retain staff as the competition for talent intensifies.

“There was a talent shortage before,” said Mark Koziel, CPA, CGMA, vice president–Firm Services & Global Alliances for the AICPA. “There is a shortage again.”

While fierce competition for talent harkens back to prerecession days, the situation today is even more intense, according to Koziel. One reason is seasonality/workload compression, one of two issues to rank among the top five in all of the survey’s size categories. Busy season always has been stressful for accounting firms, but late rule changes by Congress and extreme difficulty in accessing IRS assistance on rule questions turned the 2014 and 2015 tax seasons into two of the most difficult in memory. That has prompted an increasing number of CPAs, especially at large firms, to look for situations with better work/life balance—often out of public accounting. The challenging tax seasons also took their toll on sole practitioners, which might be one reason that succession planning appeared among the group’s top five issues for the first time.

“Some of them may just be saying they’ve had enough,” Koziel said. “They’re not doing this anymore.”

Succession issues may also be contributing to the staffing shortage, as demonstrated by succession planning’s being the other issue to appear among the top five concerns in all five size categories. As more and more firm partners prepare for and enter retirement, it creates the need to push more professionals upward into partner and manager roles, thinning the ranks at the lower staff levels. In addition, the Millennials who hold many of those positions are less inclined than their predecessors to accept the long hours associated with public accounting, especially during busy season.

While the tight talent market presents challenges for firms, it creates opportunities as well. PCPS staff suggest that firms evaluate their business models and see what they could be doing differently. Also recommended is evaluating the client list and determining which ones are the most important to the firm.

“This is about being more strategic about their service offerings,” said Natasha Schamberger, CPA, associate director–Firm Services for the AICPA. “It’s new and exciting that the profession is changing.” 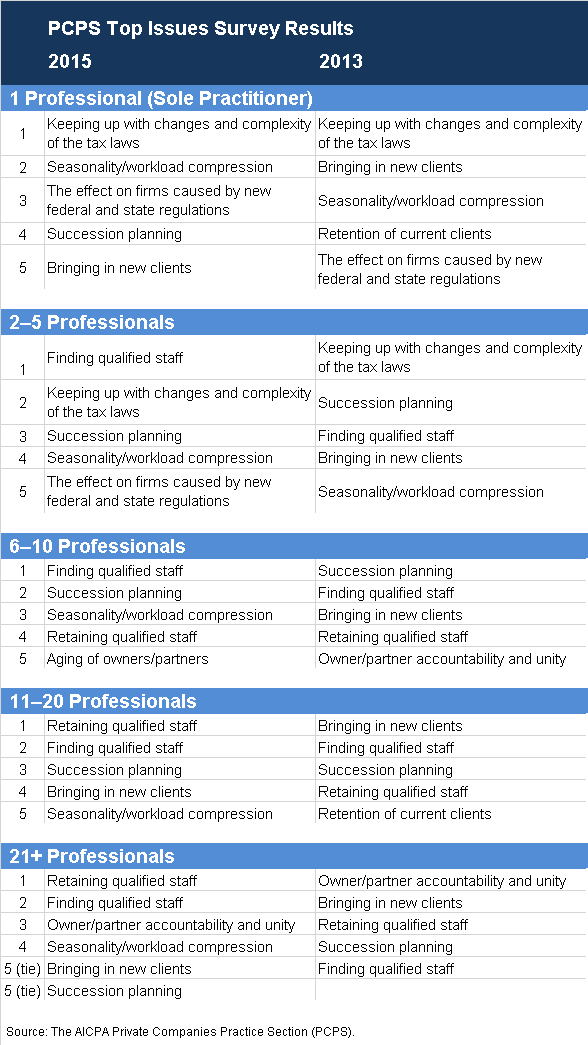