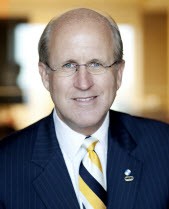 Former U.S. Comptroller General David Walker is closing a chapter in his campaign against the rising tide of government debt, but he is urging his fellow CPAs to help fight against what he calls fiscal irresponsibility by elected leaders.

Walker on Tuesday released the final report of his Comeback America Initiative, once again highlighting problems facing the finances of the U.S. federal government, states, and cities. Walker said he is closing his not-for-profit initiative to keep a long-standing commitment to his wife, Mary, to spend more time with his family.

But he is not retiring, he said, and as long as he is healthy, he won’t quit his fight for government fiscal responsibility. He called on CPAs to join him.

“People need to keep in mind that the ‘P’ in ‘CPA’ stands for ‘Public,’ ” Walker said last week during an interview with the JofA. “We have a public trust. We have to act in the public interest. We need make sure we are taking steps that improve accounting and reporting for governments. We’ve come a long way, but we’ve got a ways to go.”

In present-value dollars, the total in 2012 of these “off-balance-sheet obligations” was $69.7 trillion, or $221,400 per person. The total has more than tripled since 2000, when it was $20.4 trillion, according to Walker’s analysis. Walker said most states and many cities also have financial problems that mirror the federal government’s, with unfunded obligations for retirement and retiree health care, and outdated tax systems.

Although Walker said there has been a dramatic increase in the percentage of Americans concerned about the nation’s deteriorating financial condition, his report cited a CBS poll in March in which just 42% of respondents said reducing the federal budget deficit would make the nation’s economy better. Almost as many—39%—said they didn’t know enough to determine what effect reducing the deficit would have on the economy.

Against this backdrop of misunderstanding, Walker said, it is important for CPAs to use their knowledge and skills to lead the way toward a better financial future.

“We need to help make sure that our profession is in the lead, and tell the facts, the truth, the tough choices, in a professional, objective, nonpartisan, and non-ideological fashion,” he said. “We need to lead by example and make sure we practice what we preach and are putting our own finances in order with regard to planning, saving, investing, and not taking on too much debt. And we need to try to lead the way in making sure that current elected officials and those who want to represent us at the state and local level are taking these issues seriously.”

The Comeback America report describes seven strategies that Walker believes should be taken to reduce the deficit and restore financial balance to the U.S. government:


“We have a dysfunctional democracy,” Walker said. “We have a republic that’s no longer representative of and responsive to the public. So, in the short term, what you have to do is make the political price for current elected officials greater for doing nothing than for making tough choices.”

Numbers are not insurmountable

Although some of the numbers are daunting, Walker said it’s not too late to fix the problem. He said that if obligations are measured in discounted present-value dollar terms, changes phased in over a number of years could result in a decrease of tens of trillions of dollars because of compounding.

And as he prepared for a new chapter in his advocacy efforts, Walker appealed to CPAs to step forward and make a difference. The AICPA has taken a prominent role in promoting understanding of the federal government’s fiscal obligations and has supported a national dialogue to improve the nation’s fiscal health.

“We need to get involved,” Walker said. “If we get involved, we can make a difference, and we can help to make sure that our collective future is better than our past. Our country’s future and our families’ future are at stake. Let’s fight for their future.”