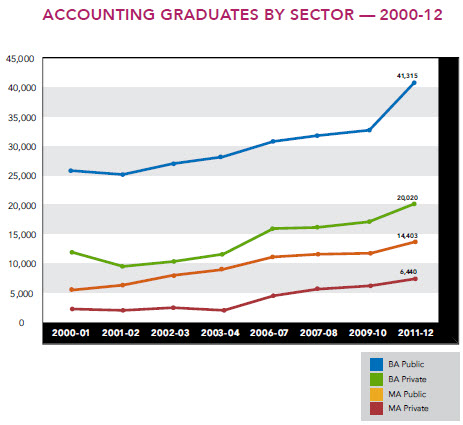 Enrollments and degrees awarded also reached high-water marks. A total of 240,380 students were enrolled in accounting programs in 2011–12, a 6% rise from 2009–10 when the last AICPA supply and demand survey was conducted.

There were 61,334 bachelor’s degrees in accounting awarded last year. The large difference between hiring numbers and degrees awarded stems from the fact that many graduates pursued master’s degrees or found jobs not tracked by the survey—such as in private business or government. Another 20,843 master’s degrees were awarded. 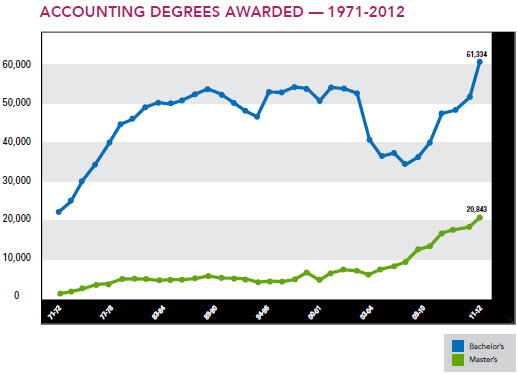 The study is based on enrollment, graduation, and hiring data collected through the 2011–12 academic year. The report is formally known as the 2013 Trends in the Supply of Accounting Graduates and the Demand for Public Accounting Recruits. As the report’s name suggests, it focuses on demand for talent in public accounting, not business and industry or other segments of the profession.

The AICPA first started conducting the survey in 1971. Its frequency has changed over the years, but currently it is conducted every other year. “We conduct the survey to inform the public and stakeholders about the human capital needs of the accounting profession,” said Scott Moore, director–Student & Professional Pathways at the AICPA.

In addition to the high demand in 2012, the study found that 89% of public accounting firms forecast that they would hire the same or more graduates in the following year, a trend that bodes well for current accounting students nearing graduation. 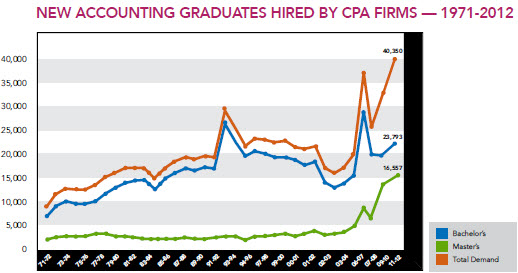 The improving economy and increased regulatory and compliance demands have impacted hiring. And  McDonald sees the convergence of accounting, finance, and IT skills as another factor. Thanks to all the IT changes of the past few years, CPA firms need workers that can use the technological tools now at their disposal to help create new ways to analyze and present clients’ financial data. Employers are looking for more than technical proficiency; they want candidates who can help make business decisions. A recent Robert Half report found that business analysts are among the most in-demand positions in the market. The report added that in-demand candidates possess business acumen, “excellent” analytical skills, and are comfortable working with various technologies. 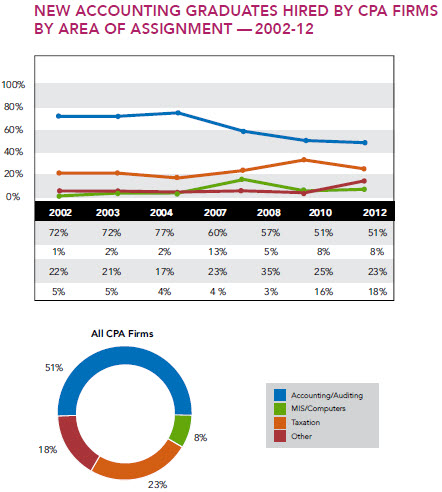 The strong hiring demand hasn’t just created a place for all those budding accountants to go—it has also led to a recruiting war for their talents. “The hiring activity is very, very high” for new graduates and experienced workers, McDonald said.

The best candidates are receiving multiple offers and counteroffers. While he has seen an overall increase in hiring since 2010, there has been an even bigger uptick over the past six to 12 months, McDonald said.

The best students—those with a 3.4 grade point average or higher—are getting recruited during their junior year in college. Top students are being offered internships with the Big Four, international firms, and in business and industry. Students with Spanish and Asian language skills are particularly in high demand.

The competition for talent doesn’t come cheap. Firms are using higher salaries, relocation assistance, and bonuses to attract top candidates. The result: a 3.3% increase in salaries in 2013 for accounting and finance jobs, according to a Robert Half report. Firms also are implementing training programs to help new hires learn soft skills such as how to work with, and present to, clients.

With so many members of the Baby Boomer generation set to retire in the coming decade, it is important for firms to retain all the new hires they currently are making, McDonald said. While Generation X will stay pretty stable as a percentage of the workforce, Generation Y will continue to ramp up its presence—bringing with it the need for more coaching on how to work together as a multigenerational workforce.

While the survey’s results were encouraging overall, they did identify some challenges for the profession in the years ahead. Nearly 5% of universities continue to receive more applications from qualified applicants than they can admit. That’s because the universities are constrained by limited spaces in the classroom. Nevertheless, more than 60% of the universities predict increased enrollment in MBA programs in accounting and MA programs in taxation.

The shortage of doctoral faculty for accounting programs has been a problem for years, and has been exacerbated by the retirement of many faculty members at the same time enrollment is surging. Producing new faculty en masse is difficult. Only about 90 doctoral programs for accountants are accredited by the Association to Advance Collegiate Schools of Business, and many of those schools only admit two or three candidates a year, said Steve Matzke, director–Faculty & University Initiatives at the AICPA.

The industry has been trying to address the issue through a number of initiatives, including the Accounting Doctoral Scholars (ADS) Program, which included a $17 million commitment from the AICPA, 68 accounting firms, 48 CPA state societies, and four other organizations. That program helped fund an incremental increase of doctoral candidates. Currently, 102 ADS Scholars are enrolled at participating universities. Another nine ADS Scholars graduated in May, according to Matzke.

The AICPA also offers a fellowship for minority doctoral students. And the PhD Project, which was started by the KPMG Foundation, also aims to increase the number of underserved minorities in doctoral programs. The AICPA is a major contributor to the PhD project.

Diversity in the profession

The new survey provides a snapshot at diversity in the profession in general. Men made up 56% of all accounting employees at CPA firms in 2012 and accounted for 81% of the partners.

In terms of ethnicity, whites made up 75% of all accounting employees. Asian and Pacific Islanders have made great strides in the industry over the years, and now are the second largest group at 15%. Hispanic/Latino was the third largest group at 5%, followed by Black/African-American (4%) and multiethnic (1%).