Amortizing R&E expenditures under the TCJA

The change this year from immediate expensing under Sec. 174 sends ripples through affected taxpayers’ returns and may affect financial reporting.

Most of the tax provisions enacted under the law known as the Tax Cuts and Jobs Act (TCJA), P.L. 115-97, became effective on Jan. 1, 2018, such as the 21% corporate tax rate, the $10,000 limitation on the itemized state and local taxes deduction, and the elimination of tax exemptions. However, some of the provisions under the TCJA were not immediately effective but were delayed. One of those provisions was the amortization of research or experimental (R&E) expenditures. Section 13206 of the TCJA amended Sec. 174 to require taxpayers to amortize specified R&E expenditures ratably over a five-year period for domestic expenditures and a 15-year period for specified R&E expenditures attributed to foreign research, using a half-year convention. This provision became effective for tax years beginning after Dec. 31, 2021, and will have a ripple effect in both financial and tax reporting.

Legislative proposals with bipartisan support have sought to delay or repeal the amortization of R&E expenses. Notably, the House-passed version of the budget reconciliation bill then known as the Build Back Better Act would have delayed the effective date to amounts paid or incurred in tax years beginning after Dec. 31, 2025. However, this provision did not survive in the version of the reconciliation bill that was enacted in August 2022, the Inflation Reduction Act, P.L. 117-169. Similarly, a repeal provision was included in an early version of the bill that eventually passed as the CHIPS and Science Act, P.L. 117-167 — only to be left out of the enacted version. Although support for modifying the provision remains, and a revision could be advanced as part of an “extender” legislative package, companies engaged in research and development (R&D) activities should be implementing this significant change.

They should also be prepared for effects that amortization of R&E expenditures may have on other tax issues, such as estimated tax payments and year-end tax planning, as well as on financial reporting.

For tax years beginning before Dec. 31, 2021, taxpayers were allowed to treat R&E expenditures in one of four ways: (1) They could currently deduct these costs under Sec. 174(a); (2) they could capitalize them (if not subject to depreciation or depletion allowances under Sec. 167 or 611) and then amortize them over a period of not less than 60 months under Sec. 174(b), beginning with the month in which they first realize benefits from the expenditures; (3) if these costs were neither treated as a current deduction nor amortized over 60 months, then taxpayers could charge them to capital account under Regs. Sec. 1.174-1; or (4) under Sec. 59(e), they could capitalize and amortize ratably certain qualified expenditures over a 10-year period. Under Sec. 59(e)(2), a qualified expenditure is any amount that would have been allowable as a deduction for the tax year in which the expenditure was paid or incurred. Under Sec. 59(e)(2)(B), expenditures under Sec. 174(a) would have qualified for the 10-year amortization treatment.

For tax years beginning after Dec. 31, 2021, the option to deduct these expenditures currently has been eliminated. Therefore, if a taxpayer incurs $1 million in domestic R&E expenditures in 2022, the taxpayer is allowed to either (1) capitalize and then amortize $100,000 in 2022 using a half-year convention for the new rule under Sec. 174(a); (2) capitalize and amortize $100,000 in 2022 under Sec. 59(e) (assuming, again, that the benefits are realized in the first month); or (3) capitalize the entire amount with no amortization under Regs. Sec. 1.174-1. The taxpayer can no longer deduct the full $1 million, as in Example 1, under the new rules in the year the expenditure is incurred.

This rule change will cause a ripple effect that will impact other reporting as well as other activities of the taxpayer. This is probably why bipartisan legislation has been introduced in Congress to delay or repeal it. Since it is becoming less likely that any of this pending legislation will pass before year end, taxpayers should prepare for the rule change by amortizing their current R&E expenditures and consider these other areas:

Estimated tax payments: Under the new rule, 90% of a taxpayer’s current R&E expenditures are not currently deductible under a half-year convention in the year of the rule change. Therefore, the taxpayer’s taxable income for that year will increase, potentially requiring greater quarterly estimated tax payments. Assuming taxpayers did not account for this rule change when making quarterly payments due this year, the remaining payments for the year may have to be adjusted upward.

State and local taxes: Most states conform to or follow the new federal rule under Sec. 174, which may increase tax liability at the state level.

Another new rule applying to the calculation of the business interest expense deduction limitation will generally offset this increase in the limitation. Prior to 2022, under Sec. 163(j)(8), ATI is defined as the taxpayer’s taxable income calculated without regard to certain items including any deduction allowable for depreciation, amortization, or depletion. For tax years beginning after Dec. 31, 2021, depreciation, amortization, and depletion are taken into account when calculating ATI. Because the amount of amortization of R&E expenditures will be taken into account in calculating ATI, for taxpayers with amortizable R&E expenditures, ATI will decrease, thus causing the Sec. 163(j) limitation amount to be smaller.

Under ASC Topic 740, the federal financial income tax expense will increase, since the temporary book-tax difference for R&E expenditures will become more unfavorable. This will increase the reported effective tax rate. In addition, both short-term and long-term deferred tax asset accounts should increase for taxpayers with significant R&E expenditures. Further, the valuation allowance account may also need to be adjusted. Still further, any business interest deduction under Sec. 163(j) or charitable contributions will further impact the effective tax rate and deferred tax assets.

These are only some of the possible areas of impact of the Sec. 174 change that CPAs can help affected business clients identify.

OTHER TCJA ADDITIONS TO SEC. 174

The TCJA added a special rule under Sec. 174(c)(3) for the treatment for software development costs, stating that “any amount paid or incurred in connection with the development of any software shall be treated as a research or experimental expenditure.” Prior to this addition, taxpayers relied on Rev. Proc. 2000-50, which stated that the costs of developing computer software so closely resemble Sec. 174 R&E expenditures that a similar accounting treatment should be used. When this revenue procedure was issued, R&E expenditures were currently deducted. Under the TCJA, software development costs are treated as R&E expenses but are now subject to five- or 15-year amortization.

The TCJA also added a provision to Sec. 174 regarding the tax treatment of disposition, retirement, or abandonment of property. Under new Sec. 174(d), taxpayers cannot deduct the capitalized expenditures when the property or project is disposed of, retired, or abandoned. The taxpayer must continue to amortize those costs until the amortization period is completed.

Example 2: Taxpayer X capitalizes R&E costs incurred in the development of a new product and amortizes them over five years. The taxpayer eventually abandons this project, with remaining R&E costs that have yet to be amortized. Under Sec. 174(d), the taxpayer is not allowed to deduct the remaining capitalized costs in the year of abandonment but must continue to amortize them over the remaining amortization period.

IMPACT TO THE R&D CREDIT

Section 13206(b) of the TCJA provides that this change to amortization of R&E expenditures is treated as a change in accounting method for purposes of Sec. 481. It also provides that this change is (1) treated as initiated by the taxpayer; (2) treated as made with the consent of the IRS (i.e., an automatic change); and (3) applied only on a cutoff basis for any R&E expenditures paid or incurred in tax years beginning after Dec. 31, 2021, and no adjustments under Sec. 481(a) are made.

CONSISTENT ANNUAL R&E EXPENSES MAY EVEN OUT

Assuming Congress does not delay, postpone, or repeal the amortization of R&E expenditures this year, federal tax liabilities of taxpayers with these expenditures may increase. The current R&E expenditure deduction will be cut by 90% in the first year under a five-year amortization period (15-year for foreign R&E expenditures) and a half-year convention. State tax liabilities may also increase with respect to states that have adopted or conformed to the new federal rule. In addition, affected taxpayers need to consider the changes and adjustments that will occur to financial reporting because of this rule change as well as the adjustments occurring in other areas of tax reporting and liability. The first few years of this change will present some challenges. However, as time passes, the impact of this rule change should diminish.

For taxpayers with a relatively stable R&E pattern, the amount of currently deductible R&E expenditures will approach the levels that were deductible before this change. 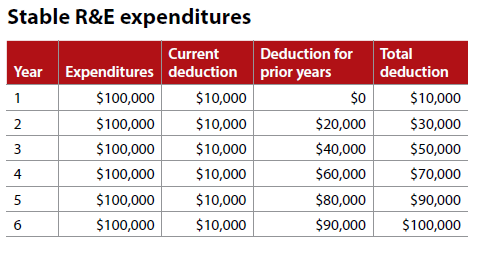 Over the long run, the impact of this change will lessen. However, in the short run, it could be problematic for many taxpayers.

Richard Ray, CPA, Ph.D., is an associate professor in the Department of Accounting, School of Business, at California State University, Chico, in Chico, Calif. To comment on this article or to suggest an idea for another article, contact Paul Bonner at Paul.Bonner@aicpa-cima.com.

This guide provides practical guidance and illustrations related to the initial and subsequent accounting for, valuation of, and disclosures related to acquired intangible assets used in research and development activities.

For more information or to make a purchase, go to aicpa.org/cpe-learning or call the Institute at 888-777-7077.