Parents pursuing an adoption can use a CPA’s advice.

The decision to adopt a child has lifelong implications, both emotional and financial. While adopting through foster care can be inexpensive, pursuing a private adoption is an expensive endeavor with one-time costs ranging up to $70,000 (americanadoptions.com). Families looking to fund adoption expenses may seek additional sources of income, such as selling investments or temporarily taking on additional work. They may also consider whether both parents will work outside the home long term.

CPAs can provide a valuable service to families through education about adoption tax benefits and incremental tax costs that accompany a change in family income, such as those that arise from choices about whether both spouses will be employed or only one. This article provides an overview of current tax provisions and illustrates how economic effects differ across income levels. Through six cases, we show how the marginal tax rate on incremental family income can vary over 40 percentage points depending on the adoptive parents' circumstances. Knowing where perilous increases in marginal tax rates exist can help families that adopt a child avoid unintended economic consequences.

Regardless of whether families pursue a private or foster care adoption, there are tax benefits to subsidize the cost of adoption and child care. For 2022, tax law provides over $17,000 of potential tax savings to adoptive, working parents.

An alternative tax benefit to the CDCC offered by some employers is the dependent care flexible spending account (DCFSA). Contributions to a DCFSA are not subject to federal, state, or Federal Insurance Contributions Act (FICA) taxes and can be withdrawn tax-free by working parents to pay for eligible child care costs for children under age 13 who live with the DCFSA holder for more than half the year (e.g., cost of day care, preschool, before- or after-school programs, and summer camps). For 2022 and after, the DCFSA contribution limit for married couples filing jointly is $5,000. DCFSA funds unspent at year end are generally forfeited, although the Consolidated Appropriations Act, 2021, P.L. 116-260, temporarily allows employers to permit participants to roll over unused amounts from 2020 to 2021 and from 2021 to 2022. For 2021, the DCFSA contribution limit was temporarily increased to $10,500 for married couples filing jointly.

Planning tip: Child care expenses paid with DCFSA funds are not eligible for the CDCC, so taxpayers must choose between the two tax benefits for the amount of expenses eligible for either benefit (up to $3,000 after 2021). Pretax contributions to a DCFSA will offer greater tax savings than the CDCC if the DCFSA holder's marginal tax rate applicable to the pretax contribution is greater than the applicable CDCC percentage. Also, in cases where both spouses are afforded the opportunity to fund a DCFSA, if one spouse earns more than the FICA wage cap and the other does not, the couple can save FICA taxes by choosing to fund the lower-earning spouse's DCFSA. Regardless of which tax benefit is most advantageous for the first $3,000 of eligible expenses, up to $2,000 of expenses in excess of the $3,000 CDCC limit should be paid with DCFSA funds ($2,000 = $5,000 DCFSA limit − $3,000 CDCC limit). This planning tip and others are illustrated in hypothetical scenarios later in the article.

For adoptive parents, there are two additional tax subsidies: a credit for qualifying adoption expenses and an income exclusion for employer-provided adoption assistance. Married couples generally must file a joint return to take the credit or exclusion. Unmarried couples are treated as one taxpayer for purposes of the credit; they may combine their qualified adoption expenses and allocate the credit between them however they choose (Sec. 23(i)).

For both the credit and the exclusion, qualified adoption expenses include reasonable and necessary adoption fees, court costs and attorney fees, traveling expenses, and other expenses directly related to the legal adoption of an eligible child. An expense may be qualified even if paid before an eligible child is identified. Prospective adoptive parents may therefore treat as qualifying expenses amounts paid at the outset of the adoption (items such as a home study, video profile, or online marketing services).

Taxpayers can claim both the credit and the exclusion in the same tax year. If claiming both, taxpayers are required to first claim any allowable exclusion and reduce the amount of the qualified adoption expenses available for the credit by the amount of any employer-provided assistance excluded from income. The result is that the credit and exclusion cannot both be claimed for the same expenses.

For example, if a taxpayer incurs $20,000 of qualifying adoption expenses and receives $14,890 of employer-provided assistance, the taxpayer can exclude the $14,890 from income and claim a credit of only $5,110. If qualifying expenses in the same example are $30,000, the taxpayer can exclude $14,890 from income and claim the maximum adoption credit of $14,890, but will not receive any tax benefit for the remaining $220 of expenses. The adoption credit is nonrefundable but can be used to offset the alternative minimum tax. Any unused credit can be carried forward for up to five years.

It is important for adoptive families to understand the economic costs imposed by the income-based reduction to the CDCC percentage and the phaseouts of the CTC and adoption credit and exclusion.

For the adoption credit and exclusion of employer-provided adoption assistance, the phaseout is based on MAGI. However, MAGI is computed differently for purposes of the credit and exclusion. Like MAGI for CTC purposes, for purposes of the credit and the exclusion, in determining MAGI, AGI is increased by any amount excluded from gross income under Secs. 911, 931, and 933 (relating to foreign earned income and income from certain U.S. territories). For purposes of the exclusion only, however, in determining MAGI, AGI is further increased by the amount of the exclusion from gross income for employer-provided adoption assistance and the deduction for interest on qualified education loans. For 2022, the phaseout applies to MAGI ranging from $223,410 to $263,410. The phaseout is proportional across this range. If a taxpayer's MAGI is $223,410 or less, the credit or exclusion will not be affected; if MAGI is $263,410 or more, the credit or exclusion is zero.

The following six scenarios illustrate how these rules affect adoption expenses as well as the marginal tax rate on incremental family income. As will be seen, the economic consequences of choices such as whether both spouses will work outside the home differ across income levels. We assume that the changes instituted by the American Rescue Plan Act, P.L. 117-2, are not extended or made permanent and that the CTC and CDCC revert to pre-2021 levels. Also, because state and local income tax effects vary by locale, we do not estimate them in our analysis. State and local taxes are an important consideration, however. We provide a summary of adoption tax benefits by state in the table at the end of this article.

Avery and Alex are married taxpayers who file jointly. During 2022, they adopt a qualified child under the age of 6 and pay $30,000 of qualifying adoption expenses. If both are employed, they will incur $5,000 of qualifying child care expenses (for simplicity, we choose $5,000 because it is the maximum amount allowable pre-2021 for purposes of the DCFSA). If only one spouse is employed, they will not incur child care expenses and will forgo $45,000 in earnings. The only MAGI modification applicable to them is the adjustment for adoption assistance.

Case 2: Avery and Alex earn a combined $188,000. The CDCC is the only tax benefit subject to phaseout. They fully fund a DCFSA because it offers greater tax savings than the CDCC (marginal tax rate > 20% CDCC). The spouse with wages below the FICA limit funds the DCFSA in order to take advantage of FICA tax savings. Their incremental after-tax earnings are $33,140.

Case 3: Avery and Alex earn a combined $260,000. The CDCC and adoption credit are subject to phaseout. The lower wage earner fully funds the DCFSA. Their incremental after-tax earnings are $20,536.

Case 4: Avery and Alex earn a combined $430,000. The CTC, CDCC, and adoption credit are all subject to phaseout. The lower wage earner fully funds the DCFSA. Their incremental after-tax earnings are $27,530.

Planning tip: In order to comprehensively evaluate the financial effects associated with both parents working outside the home, it is important to consider nontax costs of employment. An incremental increase in after-tax earnings from having two wage earners would be diminished by the cost of child care and other expenses associated with employment, such as transportation, clothing, etc. After-tax earnings could be enhanced, however, if the family receives employer-provided adoption assistance.

The fifth scenario, discussed next, illustrates the employer-provided adoption assistance exclusion. For families with income below the $223,410 phaseout threshold, the only tax cost imposed on this employer assistance is FICA. For families with income within the $223,410 to $263,410 phaseout window, however, the benefit of employer-provided adoption assistance will be further diminished by phaseouts of the exclusion as well as the adoption credit. Case 5, in comparison to Case 3, illustrates the effect.

Planning tip: As the cases illustrate, unwary taxpayers can face marginal tax rates on incremental income that far exceed marginal statutory tax rates. Families that face losing adoption tax benefits due to income-based phaseouts should consider whether they have opportunities to shift taxable income to an alternative year. CPAs can also make sure that families are aware of methods to raise nontaxable funds for adoption, such as crowdfunding (see Metrejean and McKay, "Donation-Based Crowdfunding and Nontaxable Gifts," Journal of Accountancy (March 2018)) or grants and loans (Child Welfare Information Gateway, "Grants/Loans/Tax Credit for Adoption"), and provide clients help in evaluating these alternatives, relative to taxable sources.

The six scenarios discussed above are summarized in the table "Adoptive Parents' Marginal Tax Rates on Incremental Income," below. 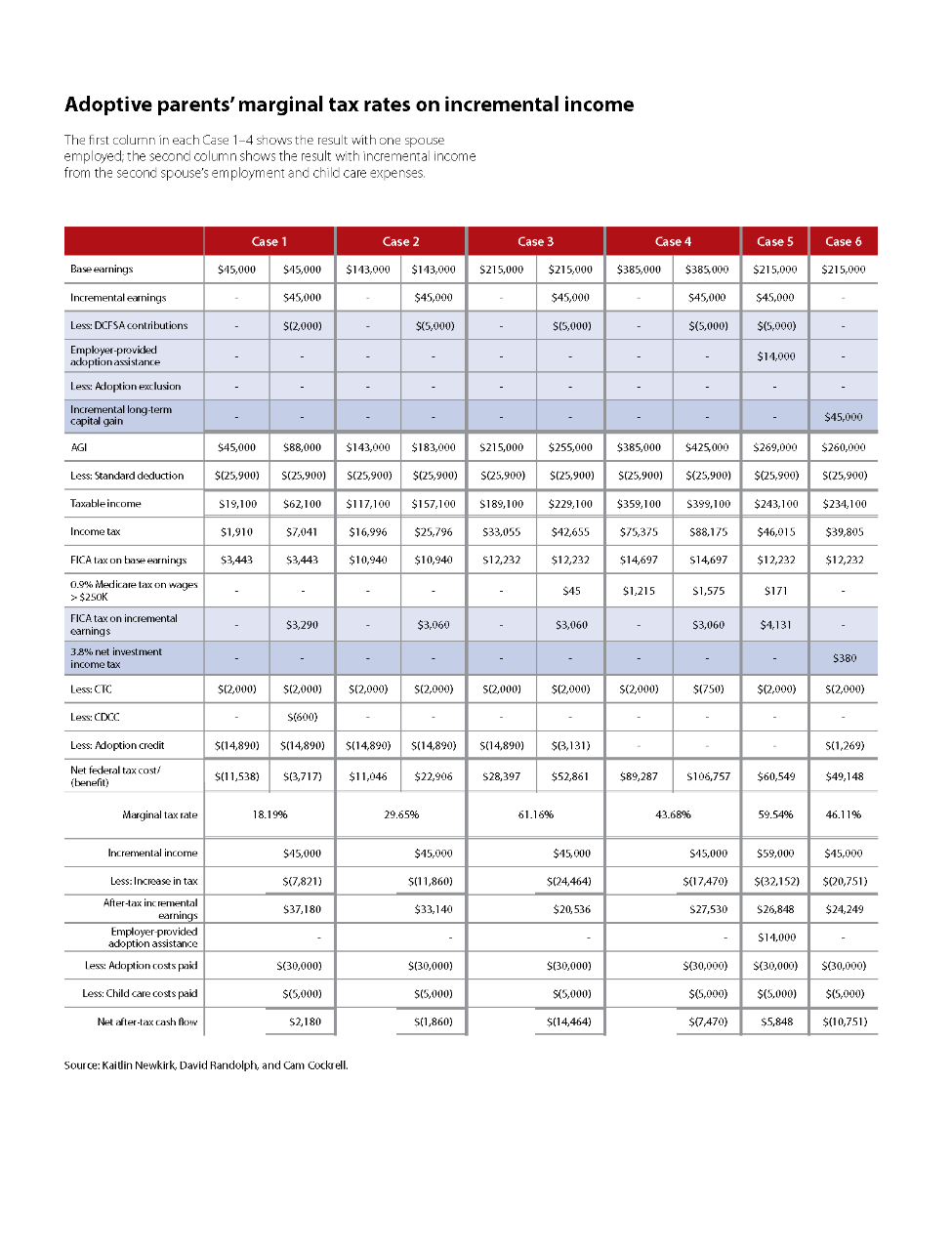 In addition to the federal tax benefits discussed above, 20 states offer tax benefits to subsidize the cost of adoption. Ohio, for example, offers a credit of up to $10,000 per adoption. Four of these states provide tax benefits only for the adoption of a special-needs child. A special-needs child is one who is determined by the state to have a specific factor or condition that may make placement with an adoptive family more difficult. 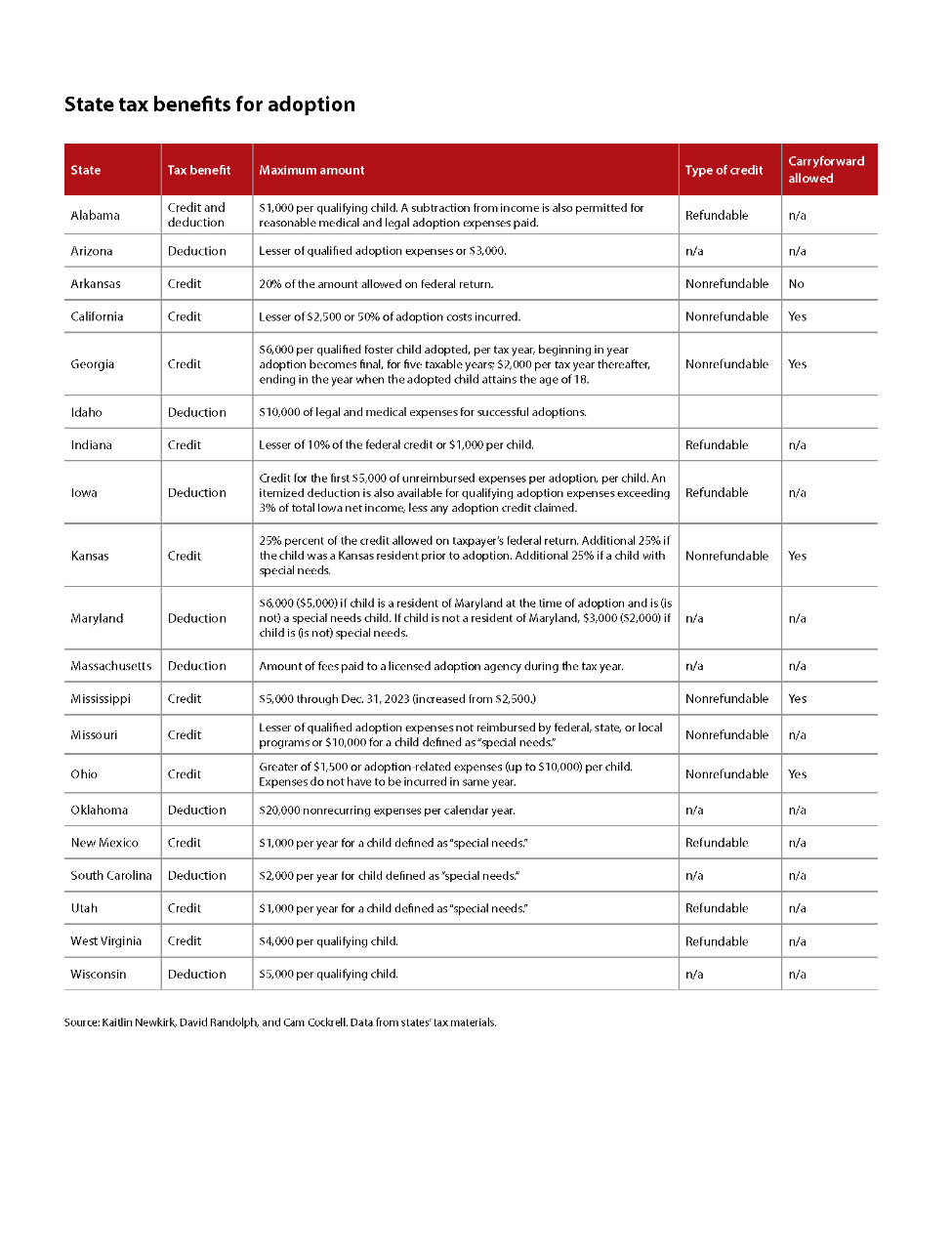 Kaitlin Newkirk, CPA, MST, is an assistant professor of accountancy, and David Randolph, CPA, Ph.D., and Cam Cockrell, Ph.D., are associate professors of accountancy, all at Xavier University in Cincinnati. To comment on this article or to suggest an idea for another article, contact Dave Strausfeld at David.Strausfeld@aicpa-cima.com.

Membership in the Personal Financial Planning (PFP) Section provides access to specialized resources in the area of personal financial planning, including complimentary access to Broadridge Advisor. Visit the PFP Center. Members with a specialization in personal financial planning may be interested in applying for the Personal Financial Specialist (PFS) credential.