The IRS program shifts responsibility for paying wages and collecting and remitting income and employment taxes from businesses to CPEOs.

The Tax Increase Prevention Act of 2014, P.L. 113-295, created the certified professional employer organization (CPEO) designation and required the IRS to implement a voluntary certification program for professional employer organizations (PEOs) (new Sec. 3511). On June 1, 2017, the IRS granted certification to an initial group of 84 CPEOs. This article examines the success of the CPEO program and the role of CPAs in the certification process. CPEOs are growing and now handle payroll, benefits, and tax responsibilities for thousands of entities and employ millions of workers, so CPAs with business clients or who work for companies should understand the role and responsibilities of CPEOs so they can advise those considering or using CPEOs.

A PRIMER ON PEOs

PEOs provide business services to small and midsize clients. Operating primarily in the human resource management area, PEOs administer payroll, benefits, and taxes and can provide workers with access to benefits such as health insurance and 401(k) plans. The PEO relationship is different from a traditional outsourcing relationship, however, in that PEOs are co-employers. Once a client company signs a co-employment agreement with a PEO, the PEO becomes a co-employer of the client's worksite employees.

The co-employment relationship involves a contractual allocation and sharing of employer responsibilities between the PEO and the client as outlined in the client service agreement. The PEO typically remits wages and withholdings of the worksite employees and bears responsibility for reporting, collecting, and depositing employment taxes at the local, state, and federal levels. The PEO issues the Form W-2, Wage and Tax Statement. At the same time, the client company retains responsibility for the primary business activities of the organization, such as product development, production, business operations, marketing, sales, and services.

According to the National Association of Professional Employer Organizations (NAPEO), there are over 900 PEOs in the United States providing services to 175,000 small and midsize businesses. Given the formal co-employer relationship between the PEO and the client company, the PEO generally is responsible for the remittance of the client's employment taxes as part of its payroll services.

The Small Business Efficiency Act (SBEA) component of the Tax Increase Prevention Act of 2014 required the IRS to establish a voluntary certification program for PEOs and created Sec. 7705, which sets out the requirements to become and remain a CPEO, and Sec. 3511, which sets out the federal employment tax treatment of CPEOs. Sec. 3511 provides that a CPEO is "treated as the employer (and no other person shall be treated as the employer) of any work site employee performing services for any customer of such organization, but only with respect to remuneration remitted by such organization to such work site employee." Thus, under the law, once a CPEO pays a client's employees, the liability for employment taxes falls on the CPEO only; at that point, the client is relieved of liability for those taxes.

One reason for this provision's importance is that there have been instances of PEOs that failed to remit the payroll taxes that they had collected from their clients. In the ensuing cases, courts had to decide whether the PEO or its client had responsibility for the unpaid employment taxes. Before the certification program, courts found that this responsibility fell on the client, regardless of whether the client had already remitted the payment to the PEO and regardless of any contractual agreement between the client and its PEO (see "Certified Professional Employer Organizations and Tax Liability Shifting: Assessing the First Two Years of the IRS Certification Program," by Katherine Sanford Goodner and Ursula Ramsey, 16-2 Berkeley Bus. L.J. 571 (2019)).

Although PEOs are not required to go through the IRS certification process, this shifting of liability from client to the CPEO represents a significant advantage of using a CPEO versus a noncertified PEO. In addition to that benefit, the SBEA clarified that a CPEO is treated as a successor employer for purposes of the wage base of the worksite employees and that the CPEO's clients remain eligible for any specific tax credits for which they would have been eligible absent the CPEO relationship.

In addition to the annual report, a responsible individual at the CPEO must sign an assertion, under penalty of perjury, stating that the CPEO has withheld and made deposits of all federal employment taxes. This assertion must be accompanied by an examination-level attestation by an independent CPA that the assertion is fairly stated in all material respects.

One of the CPEO program's most touted benefits is the transfer of liability from the client-employer to the CPEO for the collection and remission of the federal payroll taxes for its eligible worksite employees. Another oft-touted benefit of CPEO certification is the official recognition of a PEO by a government agency (here, the IRS), which brings additional credibility to the industry. Although the IRS does not specifically endorse PEOs, the list of CPEOs meeting the program's auditing and reporting standards is publicly available on the IRS website.

For the first perspective (the percentage of CPEOs seeking certification), it is helpful to have an estimate of the PEO industry's size compared with the number of initial CPEO applicants.

However, the number of CPEOs (124) on the January 2021 IRS list requires a bit of explanation because it risks appearing inflated: Of the 124 CPEOs on the list, only 55 represent independent, unrelated entities. For example, ADP Total Source of Miami has 18 entities registered with the IRS; likewise, Abel HR has five. For entities with the same registration address, we count those only once in the unique totals count in the table. Reconsidering the overall certification rate with only 55 unique CPEOs on January 2021's registration list, the overall certification rate decreases to a range of 5.6% to 7.05%.

The count of CPEOs, however, tells only one side of the story. An alternative perspective is to examine the CPEO program by analyzing market share. A report for NAPEO estimates that at the end of 2017, 907 PEOs in the United States employed a total of 3.7 million worksite employees representing approximately 175,000 worksite clients (see "An Economic Analysis: The PEO Industry Footprint in 2018," by Laurie Bassi and Dan McMurrer (September 2018), available at cdn2.hubspot.net). As there are five publicly traded PEOs in the United States, we can glean a few insights from examining those companies (see the table "Publicly Traded PEOs"). Of the five publicly traded PEOs, four are CPEOs. Based on the table, the authors calculate that the four publicly traded PEOs with CPEO certification represent approximately 69% of the overall PEO market based on the number of worksite employees.

A third perspective is to examine the profile of a PEO that pursues certification. The table "CPEO Size Based on Number of Employees" presents the CPEO organizations' relative size, based on the number of direct employees. These estimates of employee numbers are self-reported numbers from LinkedIn and/or the CPEO's website, representing a count of the CPEO's direct employees (and not their worksite employee numbers at the client site). As this table shows, four organizations have more than 1,000 employees and represent the publicly traded CPEO organizations. However, 20 organizations with CPEO certification have between 11 and 50 employees, and 22 organizations have between 51 and 200 employees. This indicates that both large and small PEOs have achieved CPEO certification.

THE CPEO PROGRAM HAS BEEN SUCCESSFUL

In assessing the CPEO program at this juncture, the perspective makes all the difference. If the CPEO program's success is measured by the number of adoptees, the overall adoption rate of 5.6% to 7.05% of the CPEO program appears low. However, a market share analysis (i.e., the number of overall worksite employees falling under the certification program's purview) reveals that over 69% of worksite employees employed by a PEO are employed by a CPEO. This criterion appears to be the stronger perspective by which to measure success. In addition, the table "CPEO Size Based on Number of Employees" demonstrates that PEOs of all sizes have sought certification. Even though, at first glance, the number of adopting organizations appears low, closer study indicates the growing dominance of CPEO certification in the PEO industry. Though still young, the CPEO program has provided additional visibility and credibility to the PEO industry, with the audited financial statements provided by CPAs playing an important role in its acceptance and success. 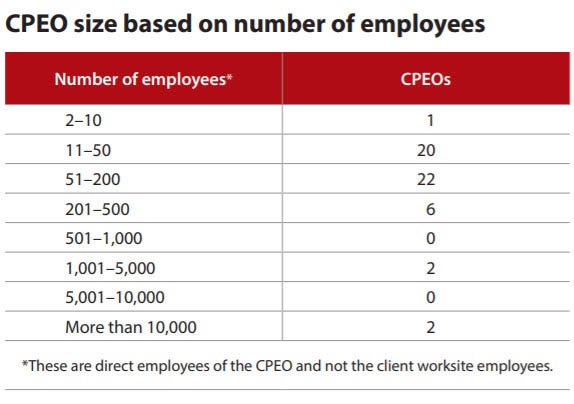 Lorraine Lee, CPA, Ph.D., MBA, is a professor of accounting, and Ursula Ramsey, J.D., is an assistant professor of business law, both in the Cameron School of Business at the University of North Carolina Wilmington.

To comment on this article or to suggest an idea for another article, contact Alistair M. Nevius, J.D., the JofA's editor-in-chief, tax, at Alistair.Nevius@aicpa-cima.com.

The COVID-19 pandemic has impacted all aspects of our lives and created many uncertainties and challenges. The AICPA Tax Section is here to help and has developed resources to help you get through this critically important time. Visit future.aicpa.org.