Updating the Statements on Standards for Tax Services 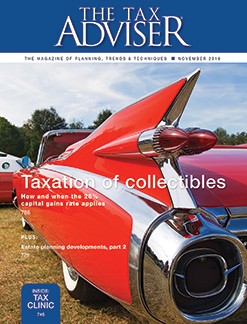 In 1964, the AICPA released the first of 10 Statements on Responsibilities in Tax Practice (SRTPs) that supplemented the AICPA Code of Professional Conduct then in effect by setting best practices for members who prepared tax returns. The SRTPs became de facto enforceable standards of professional practice for CPAs providing tax services and were the basis for the first Statements on Standards for Tax Services (SSTSs) issued in August 2000. Over time, the SSTSs have been revised to address tax law changes and clarify issues as requested by members. Two interpretations and several guidance documents issued in the form of FAQs have also been released to supplement the SSTSs.

Changes in tax practices, including changes in technology and law, have created a tax environment unrecognizable from even 10 years ago. To address these changes in the profession, the AICPA Tax Executive Committee (TEC) authorized the formation of a task force to review and update the SSTSs. Each existing standard is being carefully reviewed to ensure relevancy to current tax practice, while also modifying wording where clarification or simplification will enhance the existing standard. The task force has formed three subgroups to draft revised SSTSs. The draft SSTSs will be reviewed by the Tax Practice Responsibilities Committee and the Professional Ethics Executive Committee before they are submitted for approval to the TEC. Following approval, the new SSTSs will be sent to AICPA members for comment prior to adoption.

The following subjects, among others, are being evaluated for consideration as a new standard by the task force. As the project remains in progress, the updated SSTSs may not reflect every topic discussed below.

Taxpayer representation: This standard would set forth requirements and recommendations when representing a client before a taxing authority. These requirements would include items such as having technical competency in both the tax procedural aspects as well as the tax law involved in the representation, determining if any conflicts of interest arise before or during the representation, and considering if any potential criminal issues arise. The proposed standard also recommends the use of engagement letters to properly set a scope of the representation work that will be done for the client.

Reliance on tools: This standard relates to technology. Tax practitioners increasingly rely on various tools to help their clients. While this reliance may be appropriate in many situations, the new standard highlights the tax practitioner's responsibility to ensure tax returns are accurately prepared.

The task force is seeking comments on how to update the SSTSs from those who have firsthand perspectives on the challenges facing today's tax practitioners. Please send your input to Henry J. Grzes, CPA, lead manager—Tax Practice & Ethics, at Henry.Grzes@aicpa-cima.com, by Jan. 31, 2020. Comments will be shared with the task force.

For a detailed discussion of the issues in this area, see "Tax Practice Responsibilities: AICPA Task Force Works to Update Statements on Standards for Tax Services," in the November 2019 issue of The Tax Adviser.

Also in the November issue: