Q. Is there any way to improve the voice-recognition capability of my Windows 10 computer?

A. I'm not sure this is actually true, but a friend told me his neighbor sent him a text saying, "You need to upgrade your wife," followed immediately by a text message saying, "Sorry, I meant wifi, not wife." True or not, voice-recognition systems on our computers, smartphones, and Echo-like devices are notorious for misinterpreting what we say, so here are a few measures for improving your voice-recognition accuracy.

2. Self-learning artificial intelligence tool. Your Windows 10 speech-recognition system maintains a profile of your voice pattern, which can train itself to improve its voice-recognition capabilities by reviewing documents already on your computer. To do this, launch Speech Recognition from Control Panel by selecting Start Speech Recognition and then clicking Enable document review under the Improve speech recognition accuracy section, as pictured below. This setting allows the Speech Recognition application to review documents and email messages on your computer for commonly used words and phrases, which can usually help improve the application's recognition accuracy. (Warning, this option gives Microsoft permission to read your documents and email messages, so you may want to review the privacy notice concerning this feature available at privacy.microsoft.com/en-US/­privacystatement.)

3. Voice training. To further improve voice recognition, from the Speech Recognition dialog box, select the Train your computer to better understand you option, follow the directions for fine-tuning your microphone (if necessary), and then read to your computer so it can learn to better understand your voice pattern. Usually about 15 to 60 minutes of speech training can dramatically improve the voice-recognition accuracy.

4. Accent option. If you tend to speak with a non-native U.S. English accent, you might improve your voice-recognition accuracy by selecting the Windows Logo Start button, the gear icon Settings option, Time & language, Speech, and checking the option labeled Recognize non-native accents for this language, as pictured below.

This option uses a different set of language profiles designed to better understand some accents, particularly when English is a second language. 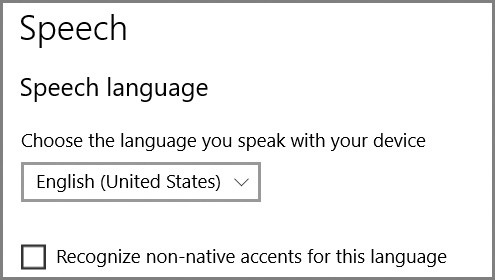 5. Eliminate echoes and noises. Another measure that may improve your computer's voice-recognition accuracy is to eliminate background noise by installing carpeting, tapestries, or soundproofing material to reduce sounds and noises that might interfere with your computer's ability to understand you.

6. Learn the commands. Microsoft provides a list of Windows 10 voice-recognition commands at click.linksynergy.com, which are designed to help you use the speech-recognition tool. As examples, the commands Start listening, Correct word, New line, Select word, Clear selection, Copy that, Copy, Delete that, Delete, Paste, Scroll down 2 pages, and Scroll up 10 pages are some of the more essential commands needed to master Windows 10 voice recognition.

8. Amazon Echo. Similarly, you can also train your Amazon Echo device to understand you more clearly, as follows. Open the Amazon ­Alexa app on your smartphone, tap the menu icon in the top-left corner (the hamburger icon), and then select Settings, Voice Training. This action will launch the voice-training program. If you have multiple Echo devices, you will be prompted to select the device you want to train, and tap Done. (It doesn't actually matter which device you select, as the voice language learning is linked to your account, which controls all of your Echo devices; nonetheless, you are required to select a device in order to continue.) Tap Next to continue. The top of your Echo device will light up, and you will be prompted to read through several sentences. Try to read the sentences using your regular speaking voice rather than your reading voice. The Echo's voice training consists of 25 sentences.­

10. Most important voice-recognition tip. Regardless of which device or voice-recognition tool you use, always proofread your voice-to-text messages before hitting save or send, to ensure your most professional image is ­consistently conveyed.