State and local governments can comply with GASB Statement No. 87 with the help of these practical illustrations.

But when GASB released GASB 87, it broke with that tradition by adopting a standard that more closely resembles the International Accounting Standards Board's IFRS 16, Leases. While FASB ASU Topic 842, Leases, continues to divide leases into the categories of operating and finance leases on meeting any one of five criteria or not, GASB 87 shares with IFRS 16 the notion of a single model that all leases represent financings. As discussed in greater detail below, GASB 87 provides for three accounting treatments: short-term leases, contracts that transfer ownership, and contracts that do not transfer ownership — a catchall for all remaining leases of nonfinancial assets.

Without the need to distinguish between operating and finance leases, the new GASB standard, like IFRS 16, is somewhat different from Topic 842, while still improving the recognition of leased assets and related liabilities and improving the comparability of financial statements among governmental entities.

Lessee accounting for short-term leases is functionally identical to the accounting for operating leases under FASB 13, requiring entries to be posted only to account for the outflow of resources during each period. For governmentwide and proprietary fund financial statements (accounted for using economic resources measurement focus), these payments will be recognized as a rent expense, while for modified accrual fund financial statements, the rent payments will be recorded as expenditures. Short-term leases require no additional disclosures.

Lease contracts that transfer ownership are treated explicitly as sales of the asset by the lessor and a purchase of the asset on credit by the lessee. To qualify for such treatment, the lease contract has to transfer ownership of the asset to the lessee by the end of the contract and cannot contain termination options. It should be noted that GASB allows contracts to contain fiscal funding or cancellation clauses and be treated as a sale as long as it is reasonably certain the clauses will not be exercised.

All leases that do not fall into the two categories listed above are treated with the new single-model approach. Lessees will be required to concurrently recognize a right-of-use asset (reported as an expenditure on modified accrual fund financials, like a capital asset purchase) and the related lease liability (other financing source on modified accrual fund financials). The lease liability, as was standard under FASB 13, will be measured at the present value of effectively fixed minimum lease payments, while the asset's initial balance will equal the liability plus additional payments for initial direct costs made to the lessor on or before the start of the lease term. As the right-of-use asset is classified as an intangible, lessees will be required to amortize the value of the asset in a systematic manner over the shorter period of the lease term or the useful life of the asset. Consistent with the lease liability's treatment as a financing, lessees will also recognize interest expense (expenditures on modified accrual fund financials) over time based on the current balance of the lease and the implicit interest rate charged to the lessee.

Lessee disclosures under the GASB 87 single-model approach will be functionally similar to the disclosures required of lessees with capital leases under the FASB 13 requirements, including a description of leasing arrangements, a summary of lease assets' historical cost and accumulated amortization by type of asset, and a delineation of principal and interest payments required over each of the next five years and beyond, grouped in five-year increments. Special lease transactions, such as subleases and sale-leaseback transactions, will require separate disclosures.

Retrospective application is required for prior years under GASB 87 by restating financial statements for all periods presented, unless it would be impractical to do so, as in the case where the required information could no longer be obtained. For example, prior-period information about expired contracts might be unavailable from a lessor that no longer exists. Therefore, in cases where full restatement is not practicable, GASB 87 provides a practical expedient. Under this expedient, governments should adjust fund net position, fund balance, or beginning net position, where appropriate, for the cumulative effect of applying the new statement for the earliest year presented on the financial statements. If a lessee government claims that full restatement is not practicable, it must disclose the reason.

The illustrations in the tables with this article demonstrate the basics of how lessees will be required to account for short-term and long-term ownership transferring and non-ownership-transferring leases and how to present them on their financial statements under GASB 87.

Table 1 illustrates a short-term lease, including the calculations and required journal entries under both accrual and modified accrual accounting.

Table 1: Illustration of lessee accounting for a short-term lease 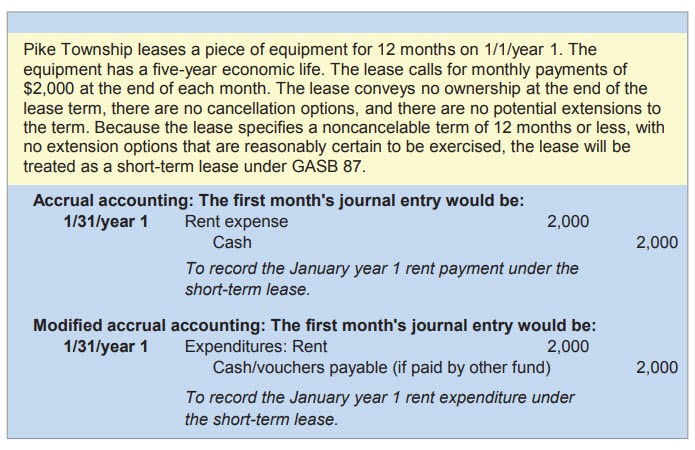 Table 2 illustrates a long-term (non-ownership-transferring) lease for Pike Township, including the present value calculations and an amortization table. Large organizations with adequate budgets can purchase sophisticated leasing software to automatically calculate the present value of future lease payments. Organizations too small to afford such software can either obtain the present value of an annuity of future lease payments using free calculators available on websites (e.g., the Investopedia present value calculator available at investopedia.com or calculate it using the Excel PV function, entered as =PV(interest rate, number of periods, payment amount, future or residual value, payment time end of period=0 or beginning of period =1). A final option is to obtain the appropriate present value factor from annuity tables provided in most accounting and finance textbooks and multiply it by the annual lease payment.

Table 2: Illustration of lessee accounting for a long-term (non-ownership-transferring) lease 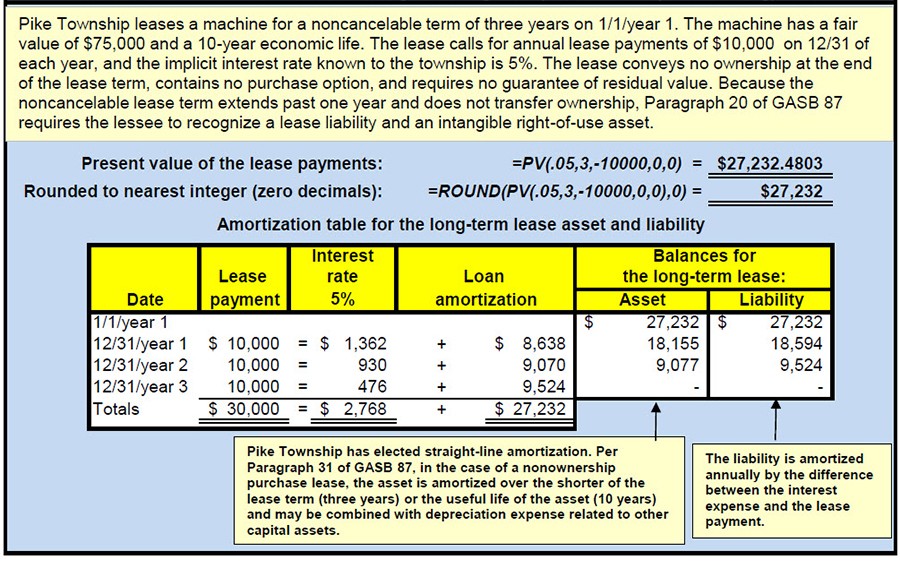 The Excel PV formula displayed in Table 2 contains a few subtleties. First, the lease payment amount of $10,000 must be entered as a negative number because it represents a cash outflow. The next element in the formula is zero, indicating the lessee receives no future or residual value. If so, it would be entered as a positive number to represent a future inflow. The final element in the formula is zero, indicating this is an ordinary annuity where payments occur at the end of each period. If payments were made at the beginning of each period (an annuity due), the final element in the formula would be 1.

Table 3 shows the journal entries required by the illustration in Table 2. 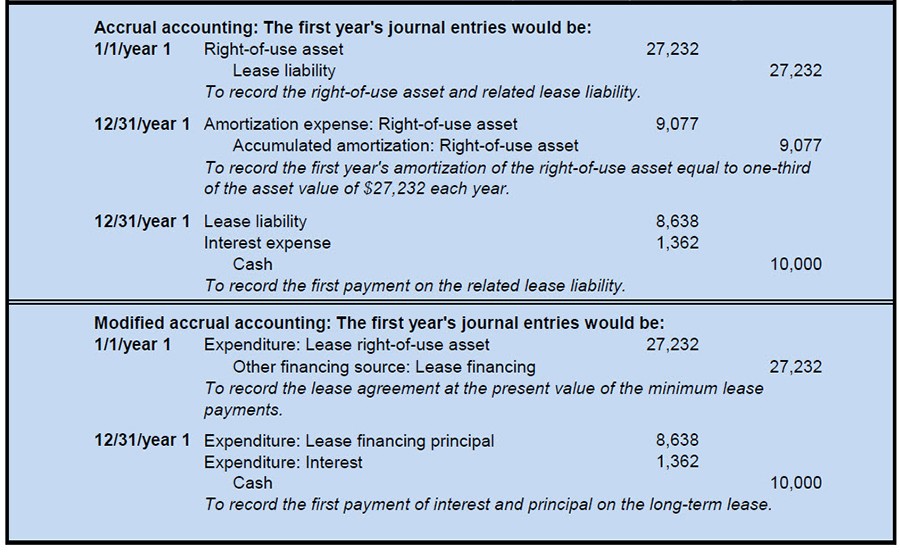 For comparison with Table 2, Table 4 illustrates a long-term ownership-transferring lease.

Table 4: Illustration of lessee accounting for a long-term(ownership-transferring) lease 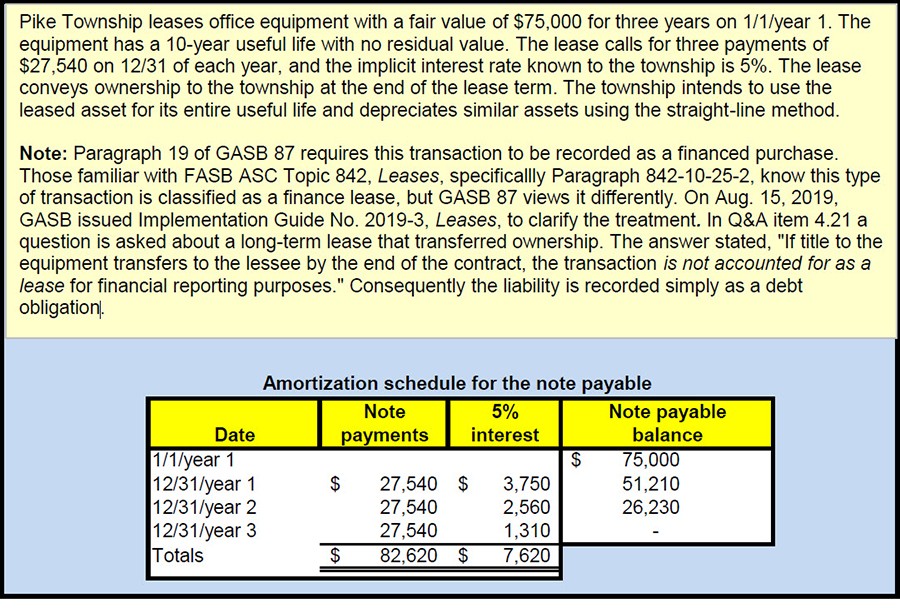 Table 5: Journal entries for the illustration in Table 4 (ownership-transferring) lease 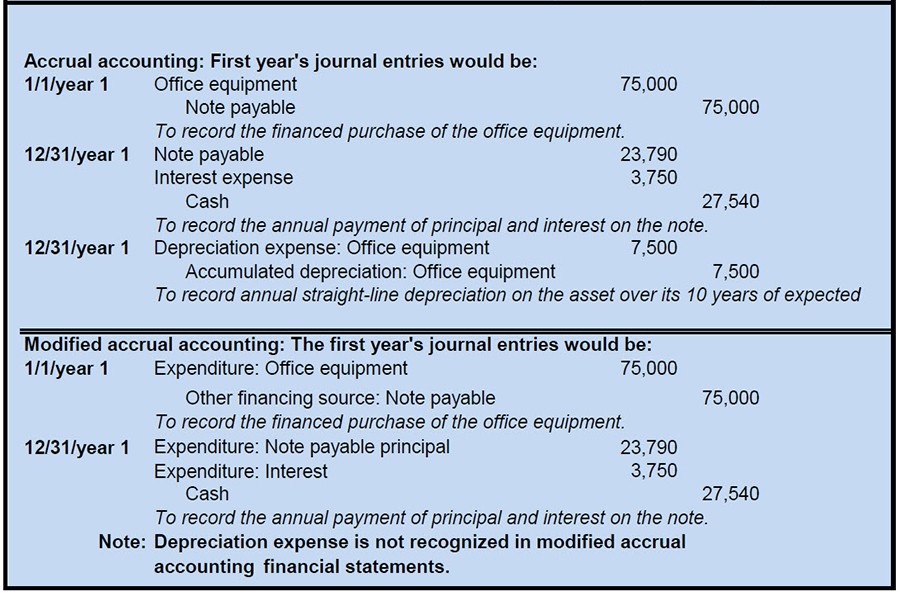 Tables 6 and 7 display the presentation of lease accounts on the lessee governmentwide statement of net position and statement of activities, assuming the same facts as in Tables 1, 2, and 3. For the statement of net position, the right-of-use asset is presented similarly to other intangibles, with a delineation of the gross amount, the accumulated amortization, and the net amount. The lease liability is split between current liabilities and long-term liabilities.

Table 6: Statement of net position presentation for leases for the long-term (non-ownership-transferring) lease based on the fact pattern in Tables 2 and 3

Table 7: Statement of activities presentation based on the fact patterns in Tables 1, 2, and 3

In the governmental funds balance sheet, there are no lines specific to lease accounting, as the short-term lease is treated as an expenditure for rent, while the long-term non-ownership-transferring lease is treated as both an expenditure and an "other financing source." As a result, the only fund financial statement impacted by lease reporting is the "Statement of Revenues, Expenditures, and Changes in Fund Balances," as shown in Table 8.

Table 8: Statement of revenues, expenditures, and changes in fund balances based on the fact patterns in Tables 1, 2, and 3

TRANSITIONING TO THE NEW STANDARD

Starting early is important because governments will need to complete a time-consuming process to be ready for implementation for reporting periods beginning after Dec. 15, 2019. First, governments must identify the population of all existing leases and gather the relevant contracts. As part of this effort, government units will have to ensure their financial system's chart of accounts can support recording assets, liabilities, and expenses under the new standard, and that recordkeeping systems can meet the data-gathering demands of identifying all leases and lease terms as well as the appropriate amortization of the resulting balances. Governments must also review lease agreements to create a schedule of key data points (e.g., interest rate, lease term, lease payments, and renewal dates, just to name a few) to ensure that amounts can be properly calculated.

After gathering the data, governments must develop accounting policy statements to outline the process for making specific judgments with a significant impact on the measurement of the right-of-use assets and related obligations, such as the likelihood of exercising an optional lease extension or the likelihood of using a fiscal funding or cancellation clause to terminate a lease early. Once the policies have been developed, governments will have to determine whether it is practicable to retrospectively adjust their financial statements for prior periods or whether they will have to use the practical expedient discussed above and write the additional disclosure statements explaining their rationale.

One survey provides evidence that some government units still have a significant amount of work to do to prepare for implementing the new standard. Cherry Bekaert LLP, in its April 2018 Annual State and Local Government Benchmarking Survey regarding GASB 87 assessments (available at media.cbh.com, slide 48) indicates 22% of authorities, 25% of schools, 41% of municipalities, and 50% of counties surveyed had not yet ascertained whether GASB 87 would impact their financial statements nor begun the process to adjust for the potential effects on the financial statements and footnotes. Lessee governments should keep a close eye on GASB's process for developing implementation guidance for the new standard; the board issued an exposure draft for its implementation guide in February, and a final version is expected to be published by the end of the second quarter in 2019.

Although the new GASB standard on lease accounting differs in a few significant ways from the FASB approach, it still achieves the same goal of improving financial reporting by requiring entities to record long-term leased assets and liabilities on their financial statements that were previously recorded as operating leases, which avoided financial statement presentation. This article illustrates only the basics of lessee accounting under GASB 87, and additional analysis will be required for leases with variable payments, contracts with multiple components, lease modifications, sale-leasebacks, leasebacks, intra-entity leases, and subleases. However, for governments with traditional fixed-term leases, hopefully this article will make the main features of the new standard a little easier to understand and enable a smoother, less stressful transition.

Robert L. Paretta, CPA, Ph.D., is associate professor of accounting and management information systems at the Alfred Lerner College of Business and Economics at the University of Delaware in Newark, Del. James V. Celia, CPA, M.S., is a student in the Ph.D. program at The Ohio State University.

To comment on this article or to suggest an idea for another article, contact Ken Tysiac, the JofA's editorial director, at Kenneth.Tysiac@aicpa-cima.com or 919-402-2112.

For more information or to make a purchase or register, visit aicpastore.com or call the Institute at 888-777-7077.