Find out how the taxation of children’s unearned income was changed by the Tax Cuts and Jobs Act.

Many areas of the U.S. individual income tax were changed for tax years 2018 through 2025 when P.L. 115-97, known as the Tax Cuts and Jobs Act (TCJA), was enacted in late 2017. One of those areas was the "kiddie tax," the tax imposed on certain children with unearned income. Congressional efforts to amend the Internal Revenue Code garnered substantial press coverage from late 2017 through early 2018 given the significant and far-ranging changes made to the tax law as a whole. Major changes were made to the kiddie tax as well, yet press coverage of these changes has been scant.

Since the TCJA became law, a few articles have reported that the kiddie tax is calculated simply by reference to the estate and trust tax rate table. This synopsis of law changes may have been inspired by page 9 of the congressional conference committee report for P.L. 115-97, which stated, "taxable income attributable to earned income is taxed according to an unmarried taxpayer's brackets and rates. Taxable income attributable to net unearned income is taxed according to the brackets applicable to trusts and estates" (H.R. Conf. Rep't No. 115-466, 115th Cong., 1st Sess. 197 (Dec. 15, 2017), available at docs.house.gov. Yet this description of how the kiddie tax is computed is not entirely accurate. The purpose of this article is to provide a robust discussion of the changes to the law to help practitioners better understand how the law has changed and to assist them in calculating estimated quarterly tax payments for children subject to the tax.

HOW THE TCJA SIMPLIFIED THE KIDDIE TAX

The old law was also complex when the child's parents were divorced or married filing separately, because the tax preparer had to determine which parent's marginal tax rate should be used. Another complexity stemmed from computing the child's allocable share of the parental tax when the child had siblings who were also subject to the kiddie tax.

Finally, under the old law, it was difficult to calculate the kiddie tax when the parent(s) had a different tax year than the child. Thanks to changes made by the TCJA, all of the foregoing complexities vanish for 2018 through 2025, since none of these provisions apply to the calculation of the kiddie tax during this time frame. The conference committee report for the TCJA confirms Congress's intent was to simplify the calculation of the kiddie tax so that a child's tax is "unaffected by the tax situation of the child's parent or the unearned income of any siblings" (H.R. Conf. Rep't No. 115-466, 115th Cong., 1st Sess. 197 (Dec. 15, 2017)).

Unfortunately, an administrative convenience in the old kiddie tax did not find its way into the new rules. Under the old law, parents could elect to report a child's unearned income on their income tax return using Form 8814, Parents' Election to Report Child's Interest and Dividends. Parents whose children had only interest and dividends subject to the kiddie tax could avoid the added cost and hassle of filing income tax returns for the children. It appears this convenience does not exist in the new law since there is no corollary provision, nor does the new law expressly reference the election provision in the old law. While the removal of this administrative convenience will be irksome for some taxpayers, it is a logical change to the law since the kiddie tax is no longer calculated at the parents' rates.

Sec. 1(g) contained the rules for computing the kiddie tax before the recent law changes. Sec. 1(j) was added to the law to provide all the individual tax rate changes enacted by the TCJA. Sec. 1(j)(4) presents the new kiddie tax rules, which are a mix of old and new elements.

Elements of the old kiddie tax that still apply

The new law retains the computation of "net unearned income" (NUI) as a key element in determining the new kiddie tax. NUI is the excess of a child's unearned income over the sum of (1) $1,050, plus (2) the greater of $1,050 or the child's itemized deductions related to the unearned income. By law, NUI cannot exceed the child's taxable income.

Earned income continues to be defined as the sum of amounts received as compensation for personal services as well as taxable distributions from qualified disability trusts. In contrast, a child's unearned income will generally comprise income generated by property, such as interest, dividends, and capital gains, along with certain nonproperty income, such as taxable Social Security benefits and taxable scholarships.

Elements added to the kiddie tax

Despite Congress's intent to simplify the kiddie tax, the TCJA introduced new elements that make its computation more complex. First, the law introduced the concept of "earned taxable income" (ETI). While ETI relates only to the computation of the kiddie tax, it has the potential to create confusion in at least two ways. First, the term "earned taxable income" is very similar to the term "earned income" (discussed above with respect to NUI), but these items are computed in distinctly different ways. ETI is taxable income less NUI, while earned income is the total of all the child's compensation received for services provided during the year and taxable distributions to the child from a qualified disability trust.

ETI is also a misnomer for children whose only income for the year was unearned income. Despite having no income earned from their labor, these children will still have ETI because it is computed as the difference between the children's taxable income and NUI amounts. 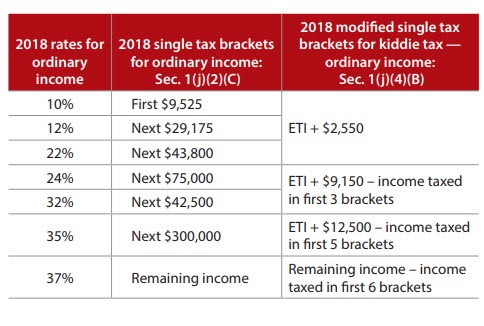 Similarly, the new kiddie tax rules modify the 0%/15%/20% breakpoints that would otherwise apply to a child's net long-term capital gains and/or qualified dividends. These modifications are also computed as the sum of a child's ETI and specific 0%/15%/20% preferential rate breakpoints borrowed from estates and trusts.

The foregoing tax rate modifications for both the ordinary and preferential tax rates are unique to each taxpayer since they are based on each child's personal ETI for the year, adding another layer of complexity to the new kiddie tax calculations.

Overall effect of the rate modifications

The tax rate modifications cross-referenced from the estate/trust income tax rates can have the effect of shifting a child's income into higher tax brackets before all the lower brackets are full, as well as removing certain tax brackets from the computation of the kiddie tax altogether. Furthermore, referring to the estate/trust income tax rates is a significant policy shift from the old rules, which taxed a portion of the child's income at a parent's tax rate. The congressional committee reports are silent about the reason for this shift.

HOW TO COMPUTE THE KIDDIE TAX

In preparation for the 2019 filing season, the IRS will update Form 8615, Tax for Certain Children Who Have Unearned Income, and IRS Publication 929, Tax Rules for Children and Dependents, to facilitate computing the kiddie tax for the 2018 tax year. Software companies will update their tax return preparation products to incorporate the new law. In the meantime, this article demonstrates how to compute the new kiddie tax for one taxpayer. Additional examples can be found here, including examples of how the tax owed for children subject to the kiddie tax can change from 2017 to 2018.

A, who is 14 years old, has both ordinary income and income that is taxed at preferential rates. She was fortunate to be born into a family with the financial means to provide her with significant income-generating property. A owns U.S. obligations that pay $10,000 of interest annually. She also holds stock that pays qualified dividends of $35,000 annually. In addition to her portfolio income, A earns $5,000 from baby-sitting jobs throughout the year.

A's filing status is "single," and she must pay federal income tax on both her earned and unearned income annually. None of these funds are used for her support, so she is considered her parents' dependent and is subject to the kiddie tax. Finally, while A may be required to pay state income taxes on some of her federal taxable income, this example assumes her state taxes are less than her standard deduction, so she will not itemize deductions. Further, the computation of her state tax liability will depend on her state of residency and, therefore, is beyond the scope of this article. 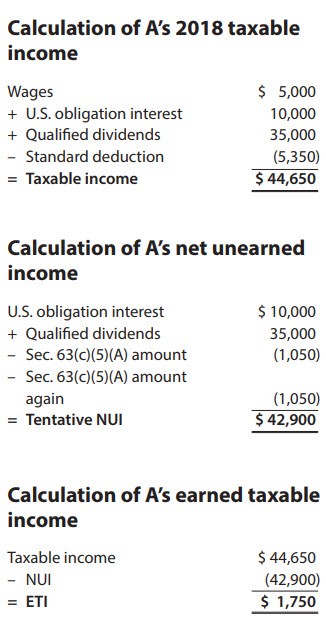 Since A has income that is subject to tax at both ordinary and preferential tax rates, taxable income must be bifurcated so that the appropriate tax rates can be applied. A's ordinary taxable income equals $9,650, her $44,650 taxable income reduced by $35,000 of qualified dividends. 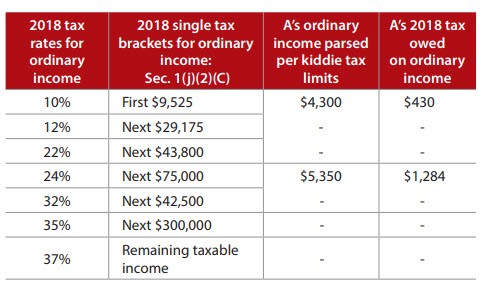 When most of the TCJA's provisions took effect on Jan. 1, 2018, many Americans hoped they would see simplified income tax calculations and reduced tax liabilities over the next eight years. While many complexities of the old kiddie tax were eliminated, new complexities were introduced. Further, whether the new law results in tax savings or additional tax due is different for each child. It cannot be taken for granted that a taxpayer's kiddie tax liability for 2018 will be similar to what it was in 2017. Detailed calculations showing the difference in the kiddie tax liability under old law and new law can be found here.

To comment on this article or to suggest an idea for another article, contact Sally P. Schreiber, a JofA senior editor, at Sally.Schreiber@aicpa-cima.com or 919-402-4828.

Subscribe to the award-winning magazine The Tax Adviser. AICPA Tax Section members receive a subscription in addition to access to a tax resource library, member-only newsletter, and four free webcasts. The Tax Section is leading tax forward with the latest news, tools, webcasts, client support, and more. Learn more at aicpastore.com/taxsection. The current issue of The Tax Adviser and many other resources are available at thetaxadviser.com.