'We have to be bold'

Days started early for Eric Hansen growing up on his family's farm on the outskirts of Independence, Mo. His duties included milking the family cow, cleaning the barns, feeding and caring for livestock, and performing all kinds of "inside" chores. The work helped instill in him the values of discipline and accountability, which have served him well in his career as a CPA.

His day often included time with his Scout troop as he worked toward becoming an Eagle Scout, an achievement that later opened doors for him at the accounting firm where he would spend his career.

And many days, on his way to his grandmother's house for piano lessons, he would ride past the home of former U.S. President Harry Truman, whose remark that "The buck stops here" still is hailed as one of the great declarations of accountability in American politics.

"What that tells me is, 'Don't push the responsibility off on somebody else,'" Hansen said. "You're responsible for it. And that resonates with me. That's how I was raised. It was one of the core values that my parents instilled in me."

Those values continue to shape Hansen's thinking as he prepares to succeed Kimberly Ellison-Taylor as chair of the AICPA. Hansen was scheduled to be inaugurated in October at the AICPA Council meeting for a term beginning in February.

In many ways, this is a great time to be in accounting. Employment is high. Technology and the interconnectedness of the global business environment are giving CPAs and CGMA designation holders a chance to serve clients, businesses, and the public in new and exciting ways.

At the same time, the furious pace of change demands that members of the profession adapt and embrace new ways of working. "Most people don't like change, and they don't want to necessarily initiate change," said Hansen, a partner and the COO of BKD CPAs & Advisors in Springfield, Mo. "And yet here we are in a marketplace where, if we don't change, we will become less relevant and less valuable in a very short period of time. We have to be bold and be more proactive."

On his 18th birthday in 1943, the late Gene Hansen, Eric's father, enlisted in the Navy. Fulfilling a sense of obligation to serve his country, Gene Hansen left high school and departed on a train from Union Station in Kansas City, Mo., to San Francisco. He served on a destroyer that provided naval support in two of the most devastating battles of World War II, at Omaha Beach in Normandy and at Okinawa. Eric Hansen remains in awe of his father's service to his country and considers his own trip to Normandy a few years ago to be one of the most poignant experiences of his life.

Gene Hansen worked for Standard Oil for 36 years, building his own house on a family farm where their garden produced many of their vegetables and their fields produced the alfalfa that fed the cows. He married Carol Hodges, a free spirit who earned her pilot's license in her younger days. During a recent visit, she looked at an old portrait of her four sons and recalled with a smile that they fought one another all the way to the photographer's studio. Eric Hansen is the third of the four children, and they all were required to complete their chores before they were allowed to play—and all rose to the rank of Eagle Scout.

"They were hardworking kids, I'll tell you," Carol Hansen said. 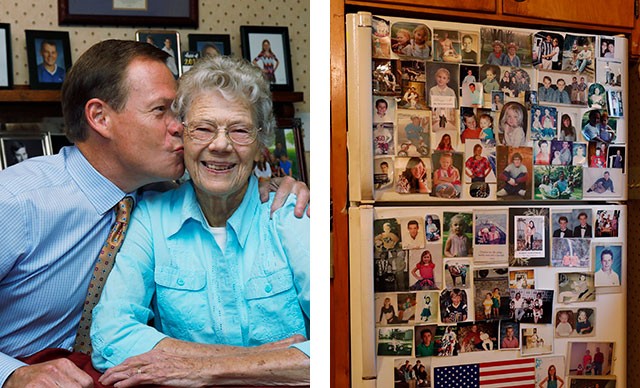 Carol Hansen says her son Eric and his brothers had to finish chores on their Missouri farm before they could play. Her refrigerator photo display documents the family’s growth.

Even as a teenager, Eric showed signs of the attention to detail that would help him succeed as a CPA. When packing for Scout camp, he would meticulously write out a list of everything he would need to bring with him. After graduating from high school, he spent time working at Standard Oil and a grocery store before enrolling at Evangel University in Springfield, Mo.

As good fortune would have it, his brother Brent transferred to Evangel from the University of Cincinnati for his senior year. Eric didn't know what he wanted to study, and it was Brent who suggested that accounting would be a good fit because of Eric's math skills. Eric excelled in school and in football as a walk-on defensive back, and befriended BKD partner Chuck Wells during a campus visit. Wells passed Hansen's résumé to Jim Sneed, the partner in charge of recruiting, but Hansen was in danger of being overlooked because students from Evangel often didn't get as much attention as those from the University of Missouri, Kansas State, and the University of Kansas.

But the résumé's mention of his Eagle Scout accomplishment set Hansen apart, earning him an interview. BKD hired him, and he has risen through the ranks of the firm over 33 years, specializing in health care auditing and consulting services. In 1997, Hansen and his family moved to Tulsa, where he served as managing partner of BKD's offices in Oklahoma. Hansen currently serves as the firm's COO, overseeing day-to-day operations of the firm's national office and firm operations. During his time at the firm, BKD has grown from about $22 million in revenue to nearly $600 million. And he has emerged as a leader of the profession. 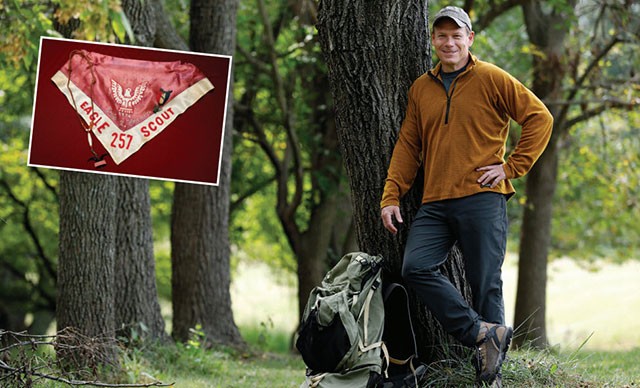 Being an Eagle Scout helped Eric Hansen stand out when he applied for his first accounting job. He continues to enjoy hiking and camping.

"Integrity and accountability are two hallmarks of our profession—and traits that define Eric as a leader," said AICPA President and CEO Barry Melancon, CPA, CGMA. "He has an unwavering commitment to our core values and unyielding focus on evolving services for the future. He will keep pushing the profession forward, driving connections across public and management accounting, and keeping members well-positioned as trusted advisers in a world where change is the only constant."

During his time as AICPA chair, Hansen is focusing his energy on three issues that pose significant opportunities for the accounting profession. He wants to help:

With respect to technology, he anticipates a significant disruption over the next five years in the audit services that CPA firms offer. Firms are developing technology that is capable of tracking inventory and performing confirmations; testing complete data sets rather than samples; and identifying anomalies in data that can be investigated to potentially provide significant value to audit clients.

The AICPA has been working to create standards and guidance to help auditors take advantage of the technology available to them and integrate data analytics into the audit process.

"I think our profession will be delivering those [audit] services, and I think it will be a strong core component of our profession, but not the way it's always been done," Hansen said. "So you've got to be willing to change with the times, to be able to reinvent, reeducate, retool yourself. But if you're stuck in the way things have been done in the past, you're going to be riding out a business model that will come to be of less and less relevance."

Continuing to position members for international success is another priority for Hansen.

The AICPA has worked with the Chartered Institute of Management Accountants to form the Association of International Certified Professional Accountants, a body of 650,000 members and students worldwide. The Association's mission is to empower the world's most highly skilled accountants to meet the world's evolving demands. Meanwhile, changes to the CPA Exam that took effect in April 2017 are designed to better prepare candidates for the higher-level tasks that will help them succeed in a globally competitive environment and be ready to perform new functions, as the tasks that newly licensed CPAs traditionally performed increasingly are handled by technology.

"Globally and internationally, I think it's important for us to have vision," Hansen said.

Hansen believes technological disruption will cause a shift in the fundamental structure of CPA firms as they take advantage of new tools in audit. Traditionally, newly minted CPAs have performed confirmations, inventory counts, and other basic tasks that helped them learn the audit process and develop professional judgment. The staff accountants learn from seniors, who learn from managers, who learn from partners in a pyramid-shaped organizational chart that has served audit firms well for many years.

But the bottom level of the pyramid is changing, as the work traditionally done by staff accountants increasingly is handled by technology. Hansen anticipates that when that bottom level is removed from firms' organizational charts, they will evolve into more of a pear-shaped model with more people clustered in the middle of the org charts. He expects this change to be implemented over time but says firms already are in the early stages of transformation. He also expects data scientists and engineers to be integrated into the audit process as audit teams take advantage of the newest technology to provide more insight to clients.

As the Baby Boom generation retires, Hansen believes it's important for employers of accountants to invest in training their staffs, including members of younger generations as they use technology for the most basic duties and move up into leadership roles. "Investing in people and developing people for what the future of our profession is going to look like is going to be critical," Hansen said. "The firms that will have a decided advantage over their competition will be the ones that can train, develop, and prepare their people to deliver service to the market in an environment that will be very different in the future."

While leading a group of Scouts on a two-week hike, Hansen directed them with one of his favorite quotes:

The saying was useful for Scouts who needed to take advantage of early daylight. But Hansen said it also applies to the urgency that members of the accounting profession need to act with as they adapt to change, embrace new opportunities, and leave behind outdated ways of doing business.

"Things that used to take years to change happen in weeks or days now, and the pace of change continues to accelerate," Hansen said. "How quickly are we going to be able to adapt and embrace that change? That's where we're going to be tested as a profession." 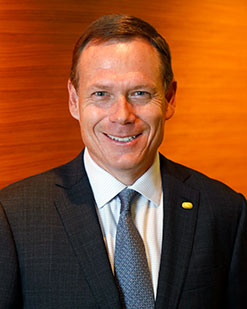 Slogan: "Personal responsibility for individual daily effort (PRIDE)." Hansen particularly stressed this with his children and said he takes his own greatest pride in their accomplishments. When Luke graduates in the spring, all three children will be University of Arkansas alumni.

Fun fact: Hansen played football at Evangel University even though he never played in high school. He became a walk-on defensive back after joining his roommate, who was a member of the team, for workouts in the school weight room.

Musical instrument: Taught to play the piano by his grandmother, Hansen played a song for his children each night before they went to bed when they were younger.

Ken Tysiac is a JofA editorial director. To comment on this article or to suggest an idea for another article, contact him at Kenneth.Tysiac@aicpa-cima.com or 919-402-2112.