Get revenue recognition right at not-for-profits

Not-for-profits face many challenges in recognizing their revenue. One of the primary challenges relates to assessing whether certain not-for-profit revenue transactions are actually contributions or exchange transactions. Furthermore, when evaluating transactions that meet the definition of a contribution, there may be a variety of other considerations including whether a contribution is conditional, an agency transaction, or a promise to give, and if it is a promise to give, whether the promise is legally enforceable. These judgments often drive the decision on whether to record revenue at a point in time or over time.

Confusion over these challenges may be compounded by the fact that not-for-profits are implementing FASB's new revenue recognition standard as well as a new FASB standard on not-for-profit financial reporting. Nonetheless, following best practices can help not-for-profit preparers and their auditors avoid common mistakes.

When facing a difficult judgment call on this matter, financial statement preparers may wish to consult with their auditors ahead of time. Auditors, meanwhile, can address this type of situation during planning meetings with their clients. Brian Zygmunt, CPA, a partner with Crowe Horwath LLP in Chicago who was part of an AICPA webcast on avoiding common errors in not-for-profit financial reporting, said that with clients who have a high level of activity in this area, he works to discuss these in detail during the audit planning meeting and, in particular for transactions that are individually material to the financial statements, he will request to see the related agreements right after the planning meeting. Then he would suggest testing these transactions during interim fieldwork rather than waiting until the end of the year.

"We talk to our clients and say anything that's material, bring it to our attention even before the planning meeting and let's talk about those key judgments our clients are making," Zygmunt said. 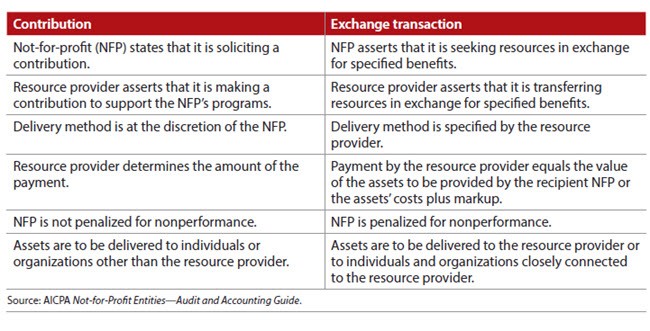 FASB Accounting Standards Codification (ASC) Section 958-605-25 requires that not-for-profits wait to recognize a contribution until they are satisfied that the likelihood is remote that the conditions that accompany the contribution will not be met. For example, if a donor promises to give $500,000 on the condition that the organization first raises $500,000 on its own, the donor's contribution is not recognized until that first $500,000 is raised.

On the other hand, a donor may promise to give a not-for-profit $100,000 per year over five years on the condition that the not-for-profit provides an annual report. In this case, the condition is so easily met that Zygmunt said accounting guidance states that it's appropriate to recognize the revenue. The problem is, many times the judgment is not as clear as in these two examples. For example, Zygmunt cited a theoretical multiyear grant in support of general operations that a private foundation reserved the right to discontinue or suspend if:

Because the grant was used to fund general operations, and the foundation had funded the organization for many years in the past, Zygmunt indicated that one could reasonably conclude that the likelihood of violations of the last three conditions was remote and that the grant met the criteria for an unconditional contribution. But he acknowledged that others might see it differently.

"If you get 100 different practitioners looking at this, you're not going to get 100 that are going to come to the same conclusion, because there is judgment involved," Zygmunt said.

Steve Kattell, CPA, owner of the firm Kattell and Company PL, in Gainesville, Fla., who joined Zygmunt to present the AICPA webcast, advised one client to solve a conditional vs. unconditional question with a phone call. A public library had a grant from a large, private foundation on the condition that the funds would be spent on a specific technology improvement project. The project was completed without spending the entire amount of the grant, and the library officials didn't know whether they should give the money back. Kattell surmised that the private foundation wouldn't want the money back and advised the library officials to call the foundation. The foundation responded by releasing the money for whatever purposes the library needed, and the revenue was recognized.

"Sometimes the language of the agreement seems a little more restrictive or conditional than it really is," Kattell said. "And that's why good communication with your funding sources can be very helpful."

As an example, Zygmunt cited a donor who said a not-for-profit would receive a specific amount in his will. Ordinarily, this would just be an intention, not an unconditional promise, and the revenue would not be recorded. But when the promise was backed up with a binding, legally enforceable document committing to the donation, the revenue was correctly recorded, Zygmunt said.

Sometimes organizations capitalize on this language to avoid the often time-consuming job of recording pledges receivable, Zygmunt said. They have their donors sign pledge cards that say: "This is an indication of what I intend to give." Because it's an intention and not an unconditional promise, this pledged amount is not recorded as revenue. This is one example of why it's important for all departments of an organization—fundraising, legal, and accounting—to collaborate and be on the same page so that all stakeholders in the organization understand the accounting implications of the wording used in gift agreements—particularly when large fundraising campaigns are undertaken. The binding document is what makes it appropriate for the not-for-profit to recognize the revenue.

Sometimes a not-for-profit acts as an agent, trustee, or intermediary for another not-for-profit, helping donors contribute to the third-party charity. In general, unless the not-for-profit has variance power, FASB rules hold that when a donor specifies a third-party beneficiary, the organization that receives the donation as a passthrough entity should not recognize the contribution.

"But other donors say, 'I want this to go directly to XYZ charity,' " Kattell said. "And so United Way is prohibited from showing that as contributed revenue, according to the agency guidance. And so it really becomes an intermediary transaction."

Like other organizations that file GAAP financial statements, not-for-profits will be affected by the new revenue recognition standard that was jointly developed by FASB and the International Accounting Standards Board. The standard has different effective dates depending on the type of not-for-profit:

Some of the changes will be minor and easy to understand. For example, the terminology of "exchange transaction" will be superseded by "contract with a customer," but the concept will remain the same. A contribution will continue to be recognized under existing guidance based on the considerations discussed above as well as other relevant factors, whereas a contract with a customer will be recognized either at a point in time or over time as the contract is fulfilled, based on the facts and circumstances.

But other areas will remain in flux. For example, FASB is working on a project to determine how to recognize government grants under the new standard.

"It's something that people who get government grants will have to watch for," Zygmunt said.

In the constant quest for appropriate judgments, staying abreast of these best practices—which may evolve in some cases as standards shift—is the best way to avoid mistakes and produce financial reporting that complies with the rules.

Ken Tysiac is a JofA editorial director. To comment on this article or to suggest an idea for another article, contact him at Kenneth.Tysiac@aicpa-cima.com or 919-402-2112.

For more information or to make a purchase or register, go to aicpastore.com or call the Institute at 888-777-7077.