How to manage the risks of volatile foreign currency exchange rates

In October 2016, Unilever stopped delivering its products to Tesco in the U.K. and Ireland because Tesco refused to accept Unilever's across-the-board price increases of 10%. Unilever justified its price increases by citing the devaluation of the British pound following the U.K.'s vote to leave the European Union.

The companies ultimately resolved their pricing differences, but the dispute highlights the significant risk and challenge that volatile currency exchange rates present for multinational businesses striving to remain competitive while earning a reasonable profit.

Currency rate fluctuations impact the supply chain and raise questions about who should bear the brunt of the fallout—the manufacturer, the distribution channel, or the end user. A comprehensive strategy can help multinational companies, especially small and midsize businesses, address the questions and manage the risk.

HOW CURRENCY FLUCTUATIONS CAN PUMMEL PROFITS

Unilever is a global food and household goods consumer products company; Tesco is one of the world's largest supermarkets. Each company generates more than $50 billion in annual revenue.

Unilever blamed its price increase on the British pound's devaluation against both the euro and the dollar since the U.K.'s Brexit vote in June 2016. The charts "Pound vs. Dollar" and "Pound vs. Euro" show the fluctuations in the value of the pound versus those currencies in 2016. 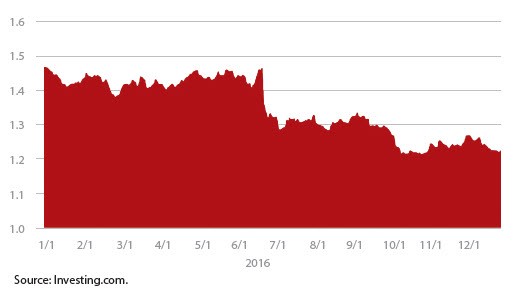 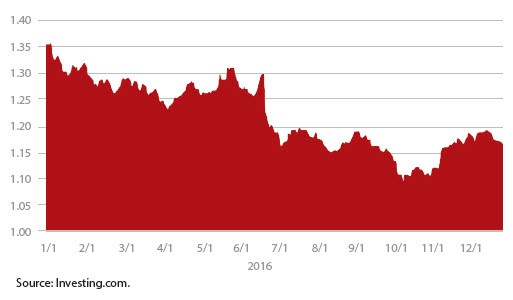 It is common for currencies to fluctuate 10% to 15% in the short term. For example, the dollar fell by 10% compared with the Japanese yen in March 2004. Longer term, currency rates may fluctuate by twice as much. The Brexit vote caused the British pound to drop 16% from June to October 2016 compared with the dollar. See the table "Likely Unilever Scenario" for an illustration of the profit impact of currency exchange rate fluctuations that Unilever likely experienced over this period.

Under the scenario where Unilever's ice cream sold in the U.K. denominated in pounds had a product cost in dollars, Unilever's profit (and cash flow) decline would be 21%. (The profit decline is greater than the currency decline because the sales in British pounds are greater than the costs in dollars.) In a less profitable business, such an adverse currency rate movement could potentially wipe out any profits from sales or, even worse, render a company insolvent.

One pint of ice cream manufactured in the U.S. and sold in the U.K.

SIZE MATTERS IN BEING ABLE TO MANAGE CURRENCY RISK

While currency rate fluctuations create a significant challenge to large global firms such as Unilever and Tesco, the challenge is even more formidable for a small firm. Large multinationals can reduce currency risk through "natural" hedges from having suppliers and customers in multiple countries and currencies. Their supply chains can be managed by either invoicing choices or sourcing differences so that currency fluctuations mostly offset each other. Large companies also may have treasury department experts in managing currency risk through various hedging vehicles.

Small firms tend to have neither the supply chain diversity nor the internal resources and knowledge to hedge currency exposure, nor the power to dictate invoice currency to effectively protect the company against currency risk.

Structural risk occurs when a company's cash inflows and outflows are mismatched due to transactions in different currencies. This is especially acute when profit margins are thin.

Currency rate fluctuations impact both sales prices and costs in global business, which in turn impact shareholder value. Most companies develop a competitive advantage by differentiating product quality and value, offering better service levels, or achieving a lower cost. If the customer does not recognize product differentiation and value, the company is left primarily with the lower-cost alternative.

When there is foreign-source manufacturing, the local currency value of raw materials and components affects the cost of the finished product. Many companies attempt to eliminate this foreign currency impact by negotiating sourcing contracts in the buyer's local currency, which transfers currency risk to the foreign supplier. What makes this approach challenging is that foreign suppliers often have the same goal to transfer their currency risk or actual hedging cost to the customer.

Even with local sourcing, which means sales and costs are in the same currency, market competitors in other foreign countries could have a currency advantage. For example, if the competitor's sourcing is from a country with a weak foreign currency, this competitor could become the low-cost producer not from superior engineering, production, or design, but from sourcing in a weak foreign currency. The trade-off is that local producers often have a proximity advantage by being near the end customer.

Selling prices also offer a competitive strategy. One approach is to price in a company's base currency instead of the customer's local currency. This approach, however, may put sellers at a competitive disadvantage from constantly changing prices. It could also place them at a disadvantage compared with competitors that follow the same strategy but have different home-country base currencies. Some industries are structured this way, such as the aircraft and oil sectors, which transact in dollars worldwide. Companies selling products that force customers to pay in the seller's currency, rather than the currency of the market, may also lose market share to more aggressive competitors that are prepared to price in a foreign currency and manage the resulting risk.

BE MORE TRANSPARENT WITH INVESTORS

In today's global economy, companies need to include currency strategy as a part of their competitive advantage development.

Companies currently focus primarily on short-term structural risks from foreign currency transactions but often lack real insights into strategy and long-term risk. In addition, companies cover well the accounting impact of nonfunctional currency transactions risk as well as their mitigation approach, such as hedging, but frequently fail to disclose the cash flow impact.

An effective foreign currency strategy formally defines currency exposure as well as identifies solutions to manage currency strategy in operations and account for currency risk in the financial statements. This includes differentiating between strategic currency exposures affecting sales and profits in each foreign market and the post-sale impact of currency rate fluctuations on unsettled transactions. Both types of exposure need to be managed, and policy and procedures must be established for gathering the required information continually so management can make appropriate and timely decisions.

Companies need to analyze their currency position in specific markets by evaluating sourcing alternatives, production capacity, market pricing, demand sensitivity, and other currency factors that may impact the business. Companies also need to amass the same intelligence about competitors because it is the comparative advantage relative to one's competitors that drives market dynamics.

PUTTING IT INTO PRACTICE

This fictional example shows how Acme Co., a small U.S. snack food manufacturer that sells to Megamarket Ltd. in the U.K., can manage currency risk.

Megamarket requires paying in British pounds, which transfers the currency risk to its suppliers. Because Acme is small, it has minimal negotiating power compared to Megamarket. Due to the 16% decline in the pound, Acme's profits have declined by 21%.

Foreign currency hedging is both a financial risk management strategy and an operating product purchasing/pricing strategy. Thus, it is one part of the company's overall risk management approach established by management with oversight by the board of directors.

An effective financial risk management strategy identifies the company's risk exposures, which exposures it is willing to accept, which exposures it wants to mitigate, and how it will hedge to offset those risks. Best practice then requires actively monitoring compliance with this policy.

In executing an active currency hedging strategy, it is important to identify "natural" hedges that will naturally offset the company's total foreign currency risk exposure. For example, if a U.S. company sells product in euros, it can identify sources of raw materials also denominated in euros. Thus, the foreign currency exchange rate fluctuation impact on the selling price (and accounts receivable) would be partly offset by the impact on cost of goods sold (and accounts payable).

For foreign currencies, the most common hedging vehicles are options, futures contracts, and forward contracts.

Mark D. Mishler (mishler@umich.edu) is a principal at CFO Resource Management in Morristown, N.J., and an adjunct professor of international business, management, finance, and accounting at Seton Hall University in South Orange, N.J., and at Rutgers University in New Brunswick, N.J.

To comment on this article or to suggest an idea for another article, contact Sabine Vollmer, senior editor, at Sabine.Vollmer@aicpa-cima.com or 919-402-2304.