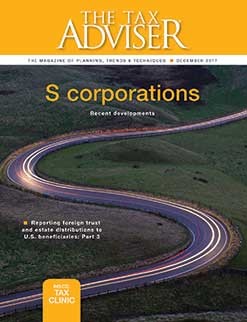 Scorporations are considered passthrough entities that pass the income and losses earned from the business to the shareholders, who are taxed on the business's income and losses on their individual income tax returns. However, an S corporation shareholder cannot automatically assume that a loss passed through from the company is deductible on his or her individual income tax return. The first step is to determine whether the shareholder has sufficient basis in the entity to deduct the loss.

Basis is important because it is the first test to determine whether the shareholder has a deductible loss from the company. Shareholders must also pass the at-risk and passive activity loss tests before reporting the loss on their tax return. Sec. 1366(d)(2) provides that the passthrough loss can be carried forward indefinitely if the taxpayer lacks sufficient basis to deduct the loss in the current tax year. However, the taxpayer may lose the ability to deduct the loss in future years if sufficient basis is not created or restored before the company is sold or shut down.

WHAT QUALIFIES AS DEBT BASIS?

Debt must meet two requirements to qualify as S corporation basis. First, the debt must run directly from the shareholder to the S corporation. Second, under Regs. Sec. 1.1366-2(a)(2), the indebtedness must be bona fide. Whether indebtedness to a shareholder is bona fide is determined under general federal tax principles and depends upon all the facts and circumstances.

The IRS adopted these "bona fide debt" provisions on July 23, 2014, when it issued final regulations providing guidance regarding basis for S corporation loans (T.D. 9682). Rather than adopt a judicial doctrine of an "actual economic outlay" that leaves the shareholder "poorer in a material sense," the regulations adopted provisions for determining whether a shareholder is entitled to debt basis under Sec. 1366(d)(1)(B).

Regs. Sec. 1.166-1(c) defines a bona fide debt as arising from a debtor-creditor relationship based on a valid and enforceable obligation to pay a fixed or determinable amount of money. Courts have looked to the intent of the parties at the time the loan is made to verify a debtor-creditor relationship. The shareholder must have a real expectation of repayment and intent to enforce collection efforts against the S corporation in the event of a default on the loan.

The definition of bona fide debt is met without a doubt when the source of the funds is an unrelated third party such as a bank. If the shareholder borrows funds from a bank and lends the cash to the S corporation, the bank will hold the shareholder to repayment terms. The conclusion becomes more uncertain when the loan is made between related parties or between the shareholder and entities with common ownership. In these situations, it is important to document the intent of the parties by characterizing the transaction as a loan in the corporate resolutions and accounting records. The parties should maintain written notes with a fixed repayment schedule and a fair market rate of interest at least equal to the applicable federal rate, similar to what a shareholder would execute with unrelated parties.

For a detailed discussion of the issues in this area, see "Tax Clinic: Structuring Loans for S Corp. Shareholder Basis Planning Opportunities," in the December 2017 issue of The Tax Adviser.

Also in the December issue: