Turning a classic networking tactic into a job lead

Young professionals looking for career development opportunities are reviving the informational interview, a classic networking tactic that fell out of favor with the rise of digital research tools.

More than a decade after the convenience of online fact gathering caused the informational interview to fade, a new generation of job seekers is rediscovering the networking tactic.

Ethan Harkleroad, a recent accounting graduate of the University of San Diego, has used informational interviews to decide on a career, secure four internships, and establish contacts with mentors.

In their most basic form, informational interviews establish contacts to subject-matter experts such as CFOs, professors, or authors, and provide answers to career- or work-related questions. The interviewer seeks and arranges the contacts and comes up with and asks the questions out of curiosity, not to apply for a job. Informational interviews usually last 30—60 minutes.

Before digital search tools such as Glassdoor, Google, and LinkedIn, informational interviews were the best way for job seekers to get a taste of what it would be like to work for different accounting firms and industries, start a rapport with company executives, and build on contacts should a job opening come up.

Millennials are learning that informational interviews are still valuable in a digital world. Harkleroad said that the information he gets from those he talks to is more valuable than what he can find online.

"You learn about their experiences, their challenges, and what they would do differently," he said. "Every time I go to one of these interviews I get way more than I bargained for."

A CLASSIC NETWORKING TACTIC WITH A DIGITAL TWIST

Harkleroad shares his penchant for informational interviews with other accounting graduates and, as research by accounting and finance staffing firm Accountemps suggests, other Millennials. Young professionals are resurrecting the networking technique with a digital-native twist. They research and connect with executives through, for example, LinkedIn, and may conduct the interview over Skype or FaceTime, said Bill Driscoll, Accountemps district president.

Asking for and scheduling informational interviews makes a lot of sense for college students who, like Harkleroad, are at the beginning of their careers. But what about accountants who have worked in the profession for a while?

Mark Astrinos, CPA/PFS, has worked as an accountant in the San Francisco area for about a decade, first in auditing and consulting, then in tax and compliance, and now as a financial planner for high-wealth individuals in Silicon Valley.

"Every time I made a career change, I would take as many people out to lunch as I could and pick their brains," he said. "It was scary to make these changes. The advice I received was very helpful."

People he asks to talk to are generally happy to spend a half-hour or an hour answering his questions, he said. Most recently he interviewed a financial planning expert, who's also an author and had written an intriguing article. To schedule an informational interview, Astrinos asked a friend to introduce him to somebody who worked at the same organization as the author. Within a week, the author emailed him to set up a time for a 20-minute phone call.

Informational interviews also remain a good way to impress an executive and develop a job lead, the survey found. Eighty-four percent of the CFOs Accountemps polled said they would probably alert someone who impressed them in an informational interview about a job opening. 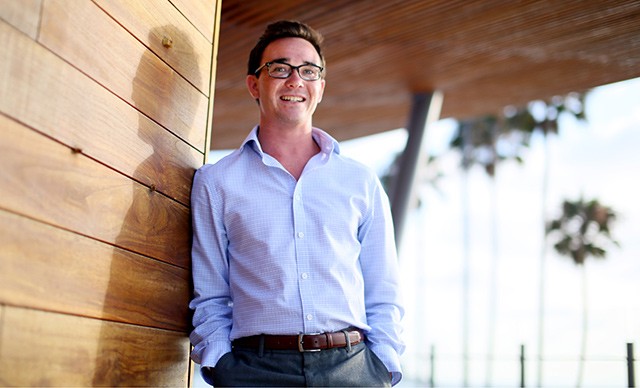 "Every time I go to one of these interviews I get way more than I bargained for," says Ethan Harkleroad, a recent accounting graduate who has gained valuable career insights and opportunities from informational interviews. (Photo by Sandy Huffaker/AP Images)

Harkleroad and Astrinos follow processes that can be broken down into five steps:

1. To get started, Harkleroad turns to LinkedIn. It's an important tool for him to find and research people who are likely to answer his questions—for example, investment bankers in San Diego willing to talk to him about their day-to-day responsibilities, a local university professor who explained to him what an accounting major entailed, or a CFO who had started his career in public accounting and retraced the career steps that led to his being in charge of operations at a San Diego craft brewing company.

Astrinos uses LinkedIn and calls on high school and college alumni who are, or know, accountants in the Bay Area. He sometimes uses the contact information at the end of blogs or written articles to reach out to the authors, but he also networks at professional conferences and on Twitter.

2. Once he knows whom he wants to talk to, Harkleroad emails them or sends them messages through LinkedIn, asking for 20—30 minutes in person or over the phone. Occasionally, he asks a contact in his network to introduce him to the person he wants to interview.

"I've never received an email back that said no," Harkleroad said. He estimates he has an actual conversation with about two-thirds of the people he contacts.

3. He usually shows up at the informational interview with an agenda—questions he wants to ask that he has either memorized or written down. He has put the piece of paper with the questions on the table in front of him to look more serious and make sure he gets every question answered, Harkleroad said. A basic question about what the interviewee does usually opens the interview, he said, but the agenda frequently becomes secondary once an interesting conversation develops.

4. At the end of the conversation, Harkleroad thanks interviewees and asks them whether they know somebody he should also talk to. "You find the people you want to talk to, you reach out to them and then make contact with someone else," he said. (See the sidebar, "How to Mind Your Manners During Informational Interviews," below for more advice.)

5. All of his contacts then end up in an Excel spreadsheet with notes and rankings to remind him when he last got in touch and what they talked about, and whom he should keep up with based on career goals.

Astrinos keeps his contacts on his cellphone and on LinkedIn.

How to mind your manners during informational interviews

Professional recruiters, including Beth A. Berk, CPA, CGMA, and Accountemps, suggest keeping these five tips in mind as you set up and conduct an informational interview:

• Pick the right person. Research a few companies or industries in which you're interested and identify the right contact to talk to.

• Be strategic about how you ask for an informational interview. Ask a common contact for an introduction or send an email to start a conversation. If you use the phone, practice what you'll say ahead of time.

• Come prepared. Dress for a business meeting and come prepared with a list of questions to run the meeting, but don't oversell yourself.

• Be patient and don't go into the interview expecting a job. Landing a job interview can take time, but an informational interview that goes well can lead to referrals.

• Show gratitude. Send a handwritten thank-you note after the interview and keep your new contact updated on your job search and career progress.

Sabine Vollmer is a JofA senior editor. To comment on this article or to suggest an idea for another article, contact her at svollmer@aicpa.org or 919-402-2304.

The Fast-Track to Leadership, July 2012