Drones: Is drone delivery simply pie in the sky?

A. Drone delivery solutions are still in the development stage and are not yet ready for commercial use. Following is a brief update regarding this technology. Amazon is on the forefront of developing drone delivery technology, but many hurdles remain before drone delivery becomes commonplace. For example, U.S. regulations restrict drones from flying higher than 400 feet, traveling beyond the view of the drone operator, flying at night, and/or flying over people. Additionally, practical limitations such as the distance a drone can travel, the amount of weight a drone can carry, problems related to flying drones in high winds and rainstorms, and avoiding physical obstacles such as kites and electrical wires have engineers scratching their heads. Also in play are numerous privacy laws pertaining to live video feeds captured and recorded by flying drones. These factors are hampering the development of drone delivery, at least in the United States. The development of drone delivery seems to be proceeding more rapidly in other countries. Drone delivery tests have been conducted in several nations, including Canada, Denmark, New Zealand, and the United Kingdom.

Domino's customers who request drone delivery (for an additional fee) receive a smartphone notification as their delivery arrives. The customer is instructed to go outside to an open area and press the button on his or her Domino's smartphone app to lower the tethered package. Once the package is delivered, the drone reels in the tether and returns to the Domino's store. Similar to U.S. regulations (as of October 2016), New Zealand's drone rules do not allow drones to fly beyond the operator's view, though commercial entities can apply for permission to do so. Currently, Flirtey drones are designed to carry payloads up to 5.5 pounds up to 10 miles, round trip—enough capacity to deliver a couple of pizzas anywhere within a small city. 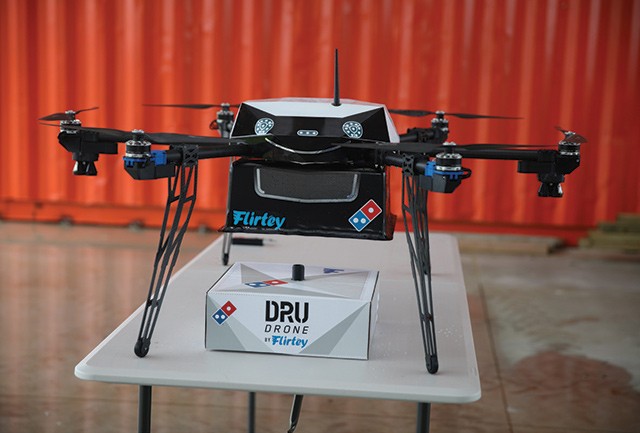 If drone delivery becomes a reality, we can expect to see them used by restaurants to deliver food, and we may also see them used in many other industries. As examples, pharmacies may use them to deliver medications, hospitals to send blood samples out for analysis, delivery companies to transport lightweight packages the final few miles of their delivery (which is reportedly the costliest portion of the delivery process), and relief organizations to deliver supplies to disaster areas. Already, 7-Eleven reports the successful drone delivery of a Slurpee in Reno, Nev., so clearly this type of technology is progressing. Other leaders in developing drone deliveries include Google, the U.S. Postal Service, DHL, the United Arab Emirates (to deliver passports, verifying the recipient at delivery using a fingerprint and eye-recognition system), Mercedes-Benz, and China-based Alibaba. But not all the drone delivery news is good; evidence suggests that drones have been used to smuggle drugs into and within the United States, and also to smuggle drugs and other contraband into prisons. It seems each new technology has a dark side.

Currently, more than 70 companies are developing drone technology, with the bulk of them focusing on imaging applications such as mapping, aerial photography, oil and gas pipeline inspection, civil engineering, forest and farmland monitoring, search and rescue, rock quarry management, and construction monitoring. Other drone applications include Facebook's efforts to develop and deploy solar-powered drone routers that can hover above cities to provide Wi-Fi internet access to rural and depopulated areas, as well as developing countries.

Of the few drone companies focusing on delivery applications, Flirtey is one of the best known. Matternet (mttr.net), a competing drone company, is developing smart drones capable of using GPS technology, sensors, and artificial intelligence to self-navigate and avoid unforeseen obstacles. Another company, Flyability (flyability.com), has developed a drone that remains stable and continues to fly even if it bumps into an obstacle. In addition, drone company Lily Robotics (lily.camera) has created a drone that follows and films a subject wearing the device's tracking wristband. I saw this technology in use at the 2015 Masters Water Ski and Wakeboard Tournament at Callaway Gardens in Pine Mountain, Ga. The drones hovered above the water skier, capturing and streaming a bird's-eye view of the action, as pictured below.

It is clear to see that drone technology is developing rapidly, as is drone delivery technology. Drone delivery technology will most likely be rolled out in other countries first, and assuming those efforts are successful, it may appear in the United States within the next few years. I welcome this technology, and I look forward to the day when a drone will be able to deliver a fresh cup of hot coffee to my favorite trout fishing location in the marshes of Little Cumberland Island, Ga.