Whether you are buying or selling, these tips can help you navigate the potential pitfalls on the road to closing the deal.

Due to the current explosion of interest in CPA firms' using mergers and acquisitions as a tool to deal with succession, promote growth, and achieve other strategic goals, many firms find themselves discussing the possibility of combining with another firm. If you find yourself becoming serious about pursuing a merger, acquisition, or sale, several potential roadblocks need to be overcome to complete the transaction successfully.

Develop a clear set of strategic goals for your merger. If you are seeking to solve a succession problem for yourself or your partners, what is the timetable for slowing down? What kind of role would you like to have in a successor firm until you retire? If you are seeking to grow your firm through a merger, define what kind of growth you are seeking. Are you attempting to enter new geographic markets, acquire new skills, or acquire clients to which you can cross-sell services?

Having "bigger is better" as your only goal can lead to acquisitions that are disruptive and fall short of expectations. Also, make sure you understand the other party's strategic goals and expectations for the business plan. Any transaction should be structured in a manner that promotes the execution of the business plan envisioned for the combined firm. The authors too often see business plans driven by the deal terms, which amounts to the tail wagging the dog.

If your firm is seeking to be sold, develop key operating and demographic data about it and be ready to provide the information early in the process. What services do you offer? Which kinds of clients do you serve? How do you serve them? What in general are they paying? What is the makeup of your professional staff? What does the technology environment look like? What are the requirements and limitations with respect to office locations and leases?

This information should be shared no later than soon after the first meeting, or even before the meeting, if circumstances allow. Information shared at this time should be generic and not include client names. Later, when the framework for a deal has been agreed to and both sides are ready for more robust due diligence (see "Do's and Don'ts of Due Diligence," JofA, June 2014, page 26), be sure to sign nondisclosure agreements before sharing the information.

Develop an understanding of what is realistic for the deal structure. If you are selling, the buyer firm is unlikely to agree to terms that will lead to negative cash flow for longer than the first year, if even that long. If you are making an acquisition, don't expect anyone to join your firm and take a big reduction in compensation without an adjustment in workload or role.

A common roadblock in mergers is the name of the successor firm. Acquired firms often worry about losing their brand identity, but that fear usually is unfounded. Firms frequently change their names for reasons other than a merger or acquisition with no negative effect. The fear of name changes often is rooted in the belief that clients and the community will make negative assumptions about what did or did not happen in the merger—based strictly on the successor firm's name. For example, a merger can outwardly appear to be a "takeover" because of the naming convention.

The proper way to convey the consequences of a merger is by thoroughly communicating why the firms merged and how the client base benefits from the merger. That message carries more weight than a name change. That said, there may be valid marketing reasons to retain an acquired firm's name if it has significant brand equity. This can be the case with firms that have a dominant niche. In these situations, it is common for the acquired firm to be referred to as a division of the successor.

If you are seeking to merge in a firm and make new equity partners as a result, evaluate the attractiveness of your partner agreement. Avoid these potential pitfalls:

Disputes over office locations and leases trip up far too many deals. Whether you are a buyer or a seller, being flexible on this issue enhances the chance of successfully closing a deal. Sellers often attach undue importance to maintaining their existing offices. Granted, most sellers can't abandon an unexpired lease of three or four years and have a deal make financial sense, but subleasing, even if at below cost, can make this problem much easier to manage. Requiring a buyer firm to operate from the seller's location for an extended period limits the population of potential buyers to those that want to be in that location and/or that don't have an existing office nearby. Buyer firms are growth-oriented, and they may be hesitant to get locked into office locations and leases that limit their growth.

Similarly, a buyer firm can hamstring its efforts by demanding that a selling firm be willing to close its office(s) and move into the buyer firm's space. This approach limits the market for acquirable firms to those that don't have geographically sensitive client bases and staff, in addition to virtually no unexpired lease terms. A more flexible approach would call for operating from the acquired firm's offices during a transition period and a willingness on the buyer's part to share or cover the reasonable cost of an unexpired lease.

Another common tool that helps overcome equity issues is the use of nonequity-partner status for young partners in acquired firms who don't meet minimum standards. So this issue doesn't become a deal-killer, it would be helpful to offer these people a clear path to equity within a reasonable time and to compensate them for the value of their equity in their prior firm.

As you likely have heard before, delays will derail a deal. But why is this true?

Many times the authors have been brought in to consult on a deal only to find that critical issues have not been addressed. It is important when making offers not to negotiate in pieces but to present all the parts to the puzzle upfront. For example, how can you negotiate the pricing in a sale without addressing the payout and retention periods, tax treatment, and treatment of accounts receivable/work in process?

Think of deal terms sitting on a balance scale. Each variable changes the balance. If you negotiate one variable at a time, the process is likely to become drawn out, and the other side starts wondering if it will ever end. An offer needs to be complete, or you may face the likelihood of constant tweaking, which leads to the deal's eventual death.

Issues will arise during the drafting of the final contract. The more significant the problems, the more important it is to discuss them and not just surprise the other side with modifications to the agreements. Sending newly proposed terms not previously discussed can generate bad will and lack of trust. A contract is a tool to memorialize what was agreed to, not to alter the deal. You can avoid this problem by making sure the parties have agreed to a detailed term sheet or letter of intent so that all terms in the offer are the only terms in the contract.

Particularly for a selling firm, the decision to sell or merge up can be very emotional. It is crucial to keep in mind at all times how these emotions can flare up. This is another reason to be timely and complete with your responses and offers. Be sensitive to the fact that this decision is made based on far more than just a spreadsheet analysis.

SUGGESTED TIMELINE FOR THE M&A PROCESS

The size of the firms involved in a deal will affect the time required to go through the process. Reasonable delays are usually tolerated if necessary to coordinate the schedules of key people who need to be involved in the process. It is harder to justify a delay based on one party's failure to decide how to proceed. Certain types of deals take longer to accomplish. For example, a straight sale typically takes less time to finalize than a large firm merger. Once the parties have decided they want to pursue a deal, they should establish a timeline for the major steps that need to be accomplished (see "Sample Timeline for Accounting Firm M&A" below for examples).

With proper planning and forethought of the merger's goals, you can assess how the other party can help you achieve your objectives. This is a key to making the timeline attainable. 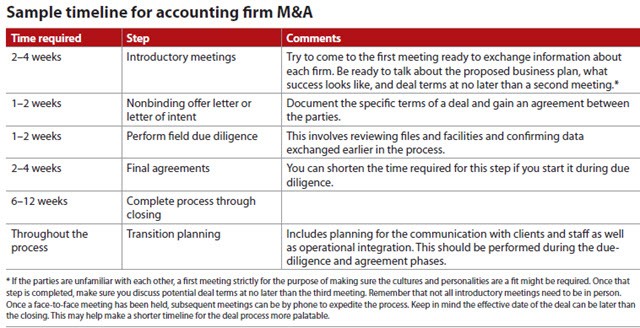 The Private Companies Practice Section (PCPS) is a voluntary firm membership section for CPAs that provides member firms with targeted practice management tools and resources, including the Succession Planning Resource Center, as well as a strong, collective voice within the CPA profession. Visit the PCPS Firm Practice Center at aicpa.org/PCPS. The Succession Planning Resource Center is available at aicpa.org.