As the profession continues its remarkable growth, students flock to accounting programs, while firms prepare for more hiring.

It's a great time to major in accounting.

Unlike many in their Millennial cohort, who face continued underemployment, accounting graduates find themselves in high demand from employers. Top students are often recruited, offered jobs during or after their internships, and enticed with signing bonuses.

According to the AICPA report 2015 Trends in the Supply of Accounting Graduates and the Demand for Public Accounting Recruits, hiring at public accounting firms jumped 7% to reach record levels in 2013—14. Ninety-one percent of all firms said they expect to hire accounting graduates at the same or higher levels in 2015.

"Coming out of the economic recession, firms are working to grow their staff and are finding increased competition to hire top talent," said Joanne Fiore, AICPA vice president—Professional Media, Pathways, and Inclusion. "Firms are hiring to both help fuel their growth and replace turnover."

On the supply side, enrollment in accounting programs also reached record highs in 2013—14, the Trends survey found. More than 253,000 students enrolled in accounting at all levels, 5% more than in 2012—13. And universities expect this trend will continue: 97% of bachelor's programs and 70% of master's programs anticipate that enrollment will be the same or higher than it was in 2013—14.

"The data in the Trends report is very positive overall, and the outlook for accounting students entering the profession is bright. At that same time, we've continued to see a slight widening of the gap between the number of students who are graduating with accounting degrees and the number of candidates sitting for the CPA exam, although the growth of the gap has slowed," said Barry ­Melancon, CPA, CGMA, the CEO and president of the AICPA.

"It is critical that we're producing enough CPAs to replace the retiring Baby Boomers and that the profession is continuing to meet the ever-changing needs of the U.S. capital markets," Melancon said. "We've been looking into this issue in great detail and are considering a number of professionwide initiatives to complement our existing programs and ensure that qualified accounting graduates are earning their CPA license."

Complementary AICPA research has found that accounting programs that stress the importance of the CPA and on-campus employer recruiting increase students' interest in becoming a CPA. Once students graduate, the single greatest influence on whether they sit for the CPA exam is support from their employer to pursue their license, including time off to study and financial compensation. Conversely, accounting graduates who are recruited by companies directly out of college, and foreign accounting students who return to their home countries after graduation, are less likely to earn their CPA license than those who begin their careers in public accounting.

The AICPA has conducted the Trends survey since 1974. It polled hundreds of firms and universities from January through April 2015 about data from the 2013—14 academic year.

The AICPA is also exploring the demand for accounting graduates in business and industry, Fiore said.

The excellent job prospects in accounting, among other reasons, draw young people to the field. "The No. 1 thing that attracts people to accounting is job security," said master's degree candidate Nilisha Patel. "That was something my classmates always talked about. 'If our classes are difficult,' we said, 'at least it means we'll have jobs when we graduate.' "

Job security was just one reason Ted Nashland opted to earn a master's degree in accounting after volunteering overseas and working as a paralegal for several years. He said he was also drawn by the flexibility and many career pathways the field offers.

"There are so many avenues you can go down: tax, audit, consulting, corporate, nonprofit, owning your own firm," said Nashland, who received his master's degree in May and is now working in the audit practice of a large firm while pursuing licensure. "I always liked learning, and I wanted to be in a field where I wouldn't get stuck, where my knowledge would still develop. It's diverse and flexible but also challenging." 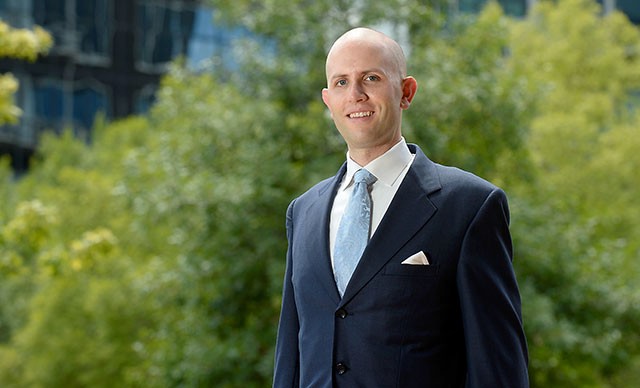 Ted Nashland says he chose to earn his master's in accounting because of the many career pathways the profession offers. Photo by Sara D. Davis/AP Images.

"There has been a growing trend of specialization in the profession, as well as a higher level of performance expected for today's entry-level CPAs," Fiore said. "Accounting students have responded to that marketplace demand by increasingly earning master's degrees and developing specialized skills to complement their strong technical base before they enter the profession."

Some students opt to pursue a master's degree—and prepare for the CPA exam—immediately after graduating from college, before the pressure of work sets in. Satya Partyka, an audit associate at BDO who received her bachelor's degree in 2014, chose to defer her employment with BDO for a year so she could complete her master's and study for the CPA exam. Many schools, including Indiana University, the University of Denver, and the University of Hawaii, have developed 3/2 programs that enable a student to receive both a bachelor's degree and a master's degree in five accelerated years of study while earning the 150 hours of college credit most states and U.S. territories require of CPA exam candidates. That requirement is 30 hours beyond what most undergraduate programs typically deliver.

"Since I needed the extra 30 credit hours, going for the master's degree was like killing two birds with one stone," said Patel, who has completed the first section of the CPA exam and plans to complete the rest in 2016 and go on to pursue licensure. Besides that, she said, having a master's degree will help her reach her career goal: to work in public accounting and, ultimately, land a C-level position in finance.

All told, the survey suggests that firms are optimistic about the future. "Record hiring levels and employers' high confidence that they will continue or increase shows the tremendous need for accounting graduates and CPAs to meet employer demand," Fiore said. "These findings indicate that job prospects for current enrollees in accounting programs as well as recent graduates remain extremely bright."

Courtney L. Vien is a JofA associate editor. To comment on this article or to suggest an idea for another article, contact her at cvien@aicpa.org or 919-402-4125.

Recruitment and Retention Toolkit: A Journey Toward a More Inclusive Workforce, aicpa.org