Blazing a path to success for the profession

AICPA Chairman Tim Christen takes pride in people as he advocates for CPAs to shape the profession’s future through change.

Tim Christen, CPA, CGMA, likes to talk about the day he looked out the window of his office and watched a very young CPA candidate get out of his car and walk awkwardly through the parking lot.

With each step, the young man picked up one foot higher than the step before. Christen realized that the CPA candidate's sole was separating from the rest of his shoe, flapping underneath his foot. The young accountant came into the office and put tape around his shoe to hold it together.

Many years later, the CPA has become a very successful professional. He exemplifies some of the young accountants Christen has worked with in the Midwest. Often they were farmers' children and first-generation college graduates. They were unpolished at the outset, but their intelligence and ambition led them to big accomplishments.

Christen, the 103rd chairman of the AICPA board of directors, sees himself in those young CPAs. He grew up in tiny Belmont, Wis., sweeping floors at his father's service station and stacking hay in his uncle's barn. He worked days as a forklift driver and shipping foreman while going to night school at the University of Wisconsin—Platteville to earn his accounting degree.

He rose through the ranks at his firm to become the chairman and CEO of Baker Tilly Virchow Krause LLP, the branded U.S. member firm of Baker Tilly International. He splits time between a Wisconsin lake home and a high-rise condominium that's a short walk from his downtown office and has a stunning view of the Chicago skyline and Lake Michigan. He is grateful for the opportunities the accounting profession has given him and eager for a new generation of young people to experience the same satisfaction he has enjoyed as a CPA.

"What's great from day one in our profession, the people you are working for and with are really cheering for you," Christen said. "They want you to grow and flourish and become a partner if it's public accounting, or become a CFO or whatever it might be in business and industry, to succeed whatever your chosen path is."

Christen's path began in Belmont, a rural town in farm country about 175 miles northwest of Chicago. His father, Ron, drove a truck and operated a service station that served as a hangout for locals when they weren't out working in the fields. His mother, Grace, drove the family's Ford LTD station wagon as a school bus for kindergartners.

Growing up with three older brothers and a younger sister, Christen quickly learned the value of hard work, sweeping the floors and bagging ice at his father's service station. On his uncle's farm, he stacked hay, a chore that taught him the importance of doing things the right way.

On an 80-degree day, it was 100 degrees in the loft of the barn, where the hay fork would lift hay bales to be stacked, eight at a time. If they weren't stacked properly, they would tip over, and Christen would have to start all over again. And by the time Christen stacked one load, the hay fork would be back to bring him eight more bales.

"There's a teamwork element to it," Christen said. "Because someone is out on the field creating the bales. Somebody is hauling them in. Somebody is putting the fork in and sending it up, and everybody relies on each other. If one person stops, the whole operation stops."

Today, Christen is chairman of the firm where he got his start in public accounting, though the name changed in 2009 when Virchow Krause adopted the global Baker Tilly brand. The firm has more than 2,500 employees and 29 offices across 12 states.

After he learned that he would become AICPA chairman, Christen typed a long list of items that he would like to focus on during his one-year term. He wants the profession to embrace change and prepare for the future as it reinforces its commitment to serve the public interest. In a world where information travels with increasing speed, he advocates for enabling more timely financial reporting and auditing to better serve investors and other stakeholders; continuing to move forward on the profession's commitment to quality; and embracing effective continuous learning.

"Tim is a talented and effective leader," said AICPA President and CEO Barry Melancon, CPA, CGMA. "One of his greatest strengths is being able to anticipate trends and disruptions, and to formulate actions that effect change. Tim will reinforce our profession's ability to evolve, positioning members for even greater success in the future."

Christen said his goals for the profession include:

Enhanced relevance for the marketplace of the future, with an emphasis on the value and timeliness of services: "Do you really believe that, in an era when cars will drive themselves and Amazon will deliver packages with drones, people are going to wait 120 days after the end of the year to receive an audit report? Because I don't. So if you can agree that 25 years from now that type of audit is not going to exist, then it's just a question of timing. Do we have 24 years? 15 years? 10 years? Five years? Two years? How much time do we have? We need to take action now.

"We should focus on the evolving public interest and the needs of our various constituents to maintain and enhance the relevance of our services. Assurance regarding the integrity of systems and processes, including cybersecurity measures, will be an increasingly important element of the services we provide. And broader reporting such as the <IR> Integrated Reporting Framework has the potential to bring additional value to preparers and users. Meanwhile, technology has the potential to increase the timeliness and effectiveness of some assurance services."

Acting from a position of strength: "We are in a really good spot. We have earned the respect and admiration of the people we work for, the people we work with, and the people who oversee us. And the profession has never been stronger. Now is the time to plan for our future."

Continued focus on quality: "Audit quality is critical because it's the foundation of our profession. Specialization is increasingly important, and the [AICPA] audit quality centers, the Center for Plain English Accounting, and the audit and accounting technical hotline provide ways to improve quality."

Acquisition and retention of talent is one of the biggest challenges for U.S. employers in the post-recession economy. As large numbers of Baby Boomers move from the workforce into retirement, accounting is one of many professions facing a talent crunch.

Finding qualified staff was one of the two top concerns for all firms except sole practitioners in the 2015 Private Companies Practice Section (PCPS) CPA Firm Top Issues survey. Against this backdrop, Christen said it's critical for the CPA profession to attract and retain professionals highly skilled in critical thinking, project management, and communication. One key to both attracting and retaining talent is successful professional development, which is a big focus for Christen.

A phrase Christen often uses—"Care and Teach"—demonstrates his commitment to developing people. He encourages the managers at Baker Tilly to spend more time taking care of the people located below them on the organizational chart than they do networking with higher-ups. The Baker Tilly culture is rooted in the belief that the most successful partners are the ones who have helped a lot of other professionals become partners or achieve their other goals.

"The most important thing you can do for your own success is make the people below you successful," Christen said.

One partner who credits much of his success to Christen is Brandon Andries, CPA, CGMA. Like many accountants with CPA firms, he was solicited by a larger firm and was considering an offer. At that time, Christen and the leader of Andries's practice area met with Andries to discuss his future. They talked about the things they envisioned him accomplishing at the firm.

"It was really how Tim described where he was going, and the mentoring he provided me, that got me to reconsider the offer and stay with the firm," Andries said.

Andries stayed with Virchow Krause and joined Christen's practice area. Christen challenged Andries and encouraged him to think globally. As with Christen, Andries grew up in a small Wisconsin town, and Christen told him that he had a great work ethic and should think bigger and broaden his perspectives. Andries said demonstrating genuine care and developing trusting relationships has helped Christen teach people how to be a professional, how the firm works, and even personal things such as how to decide whether you should buy or rent a house.

As they grew together in the firm, Christen asked Andries to leave Wisconsin to run the firm's Minneapolis office. When Andries questioned his own qualifications, Christen told him that he was displaying the humility that made him the right person for the job at a firm that encourages leaders to serve others. Andries now works alongside Christen on the firm's executive team as COO.

"Tim understood early on that this is a people business," Andries said, "and I think he has a very genuine, authentic approach. ... If I were asked who I attributed my development to most at this firm, it would definitely be Tim."

Christen believes it's an exciting time to be a CPA. Along with its foundation of integrity and public service, the accounting profession is providing opportunities to deploy technology in new and exciting ways to help clients and businesses accomplish their objectives. Meanwhile, Christen said, the profession allows people to set their own definition of success, whether that means being a CEO or CFO, owning their own business, serving a not-for-profit or in the public sector, or enjoying a midlevel job with great work/life integration.

Christen hopes his focus on the profession's future will help him continue to lead the way to success in a profession he loves because he has found that you can start just about anywhere—with tape around your shoe or in a barn stacking hay—and find satisfaction as a CPA.

"There are not many careers like accounting," he said, "where you can define what you want your career to look like and then be successful with it." 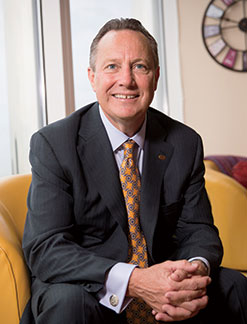 Fun fact: He once worked for the FBI as a fingerprint examiner.

Good read: Undaunted Courage and anything else by Stephen E. Ambrose.

Hobbies: Boating, golfing, fishing, wine, cigars, history, and the future of cities through participation in public service organizations such as The Commercial Club of Chicago and its Civic Consulting Alliance.

Ken Tysiac is a JofA editorial director. To comment on this article or to suggest an idea for another article, contact him at ktysiac@aicpa.org or 919-402-2112.