Understand the rules for this leading form of retirement benefit.

Cash balance plans offer owner-employees in professional practices a vehicle to defer tax on income well in excess of the annual contribution limits of traditional Sec. 401(k) and profit sharing plans. This option has become increasingly valuable since the total tax burden on owners of unincorporated, flowthrough business entities increased in 2013.

Cash balance plans, often referred to as hybrid retirement plans, are defined benefit plans that in many ways resemble defined contribution plans. The number of active cash balance plans (those without zero participants) rose 70% between 2008 and 2012, and those plans held more than $800 billion in assets in 2012. Professional practices currently account for the majority of cash balance plans, with the highest concentration in the medical field. Cash balance plans are especially appealing to this demographic (e.g., doctors, dentists, lawyers, and accountants) because these professionals often earn much-higher-than-average annual salaries and get a later start in accumulating personal retirement savings.

The American Taxpayer Relief Act of 2012, P.L. 112-240, increased the highest individual income tax rate from 35% to 39.6%, beginning in 2013. The maximum rate is effective once taxable income (including an owner-employee’s salary/guaranteed payment and flowthrough net earnings from the practice) reaches $413,201 for single filers ($464,850 for married filing jointly) in the 2015 tax year.

One valuable method of tax deferral is contributing to a retirement plan, but federal limits on contributions to Sec. 401(k) and profit sharing plans cap the benefits from this tax-planning strategy at relatively low levels. The maximum contribution into defined contribution plans is $53,000 in 2015. (But workers who are 50 and older can make an additional $6,000 catch-up contribution.)

Since cash balance plans are defined benefit plans, contributions are not subject to this cap. Instead, the limitation is on the annual payout the plan participant may receive at retirement ($210,000 as of 2015). Consequently, a cash balance participant could potentially defer tax by directing his or her practice to invest up to three or four times the Sec. 401(k) limit into a cash balance plan in a given year (depending on age, time until retirement, and other factors), with a corresponding decrease in salary that will save current tax dollars. To optimize tax deferral and retirement savings, a cash balance plan can be used in conjunction with a Sec. 401(k) plan and a profit sharing plan.

Working professionals who own a portion of their firm are uniquely positioned to derive value from a cash balance plan because their salary generally is relatively high. For example, a 2014 report of physician compensation (available at tinyurl.com/ou4e5gt) discloses an average salary among medical specialties of approximately $250,000 in 2013, depending on specialty and geographical location. Orthopedists top the survey, with average compensation of $413,000. A 2014 study of law firm partner compensation (available at tinyurl.com/ogbwa36) found average compensation of $716,000 in 2013, depending on firm variables and whether the individual is an equity or nonequity partner. Such practitioners are better able to direct a large portion of income that would otherwise be paid as salary into the cash balance plan each year after making Sec. 401(k) and profit sharing contributions, while still retaining adequate disposable income. The invested cash balance funds (which are invested by the practice and earmarked for the individual professional) will grow tax-deferred in a pooled retirement account that is shielded from creditors in the event of a lawsuit or bankruptcy.

Though both cash balance plans and pensions are defined benefit plans, cash balance plans possess features of Sec. 401(k) accounts that make them appealing in ways traditional pensions are not. A practice pays into a cash balance investment account annually to fund a certain payout for each participant at retirement, either as a lifetime annuity or a lump-sum payment. Unlike with a traditional pension plan, the practice’s plan administrator calculates each participant’s accumulated benefit annually and sends the individual a statement disclosing that amount, similar to a Sec. 401(k) account, which gives payout certainty to both parties (the practice and the participant). However, cash balance plan assets are maintained by the practice in one pooled account, unlike Sec. 401(k) assets, which legally belong to each worker.

Cash balance plans generally promise a more modest rate of growth than traditional pension plans, frequently using the 30-year Treasury bond rate (although cash balance plans may promise a fixed or other variable rate of growth). Since practices are responsible for managing the assets in their cash balance plan investment portfolios, the modest growth projections help to mitigate the risk of underperformance. Further, when owner-employees separate from the business with a cash balance plan (at retirement or before), they are generally able to take the accumulated balance with them, in cash, to fund retirement or to bring to their next employer. This portability feature is not available with traditional pension plans. 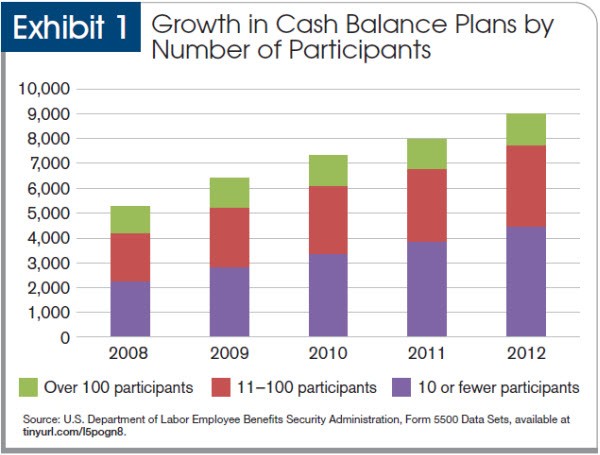 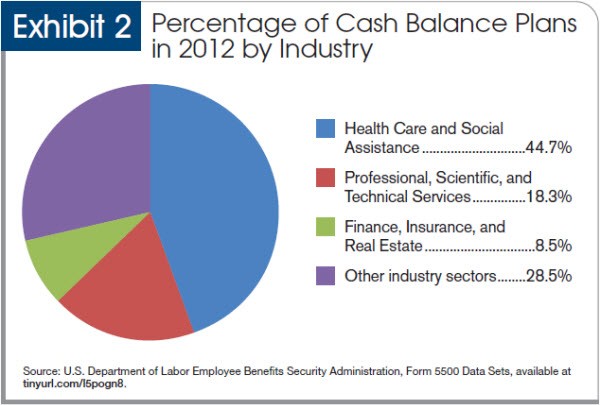 Together, the health care and professional services industries, which are heavily represented by professional practices, account for nearly two-thirds of all cash balance plans.

Constructing new cash balance plans allows considerable flexibility. (For issues associated with converting an existing pension plan to a cash balance plan, see “Cash Balance Conversions,” JofA, Feb. 2000, page 22.) A professional practice may credit either a percentage of salary or a fixed dollar amount each year to an owner-employee’s account. While large corporations often set the amount credited at a small percentage of an employee’s salary (often 5%), it is easier for owner-employees in professional practices to make individualized decisions. Using an actuary, they can work backward from the maximum defined benefit for a given individual (a $210,000 life annuity as of 2015) and spread it over the remaining period of employment. In this way, the company may designate a larger pay-in on behalf of an owner-employee who is closer to retirement.

A 40-year-old partner in a law firm, for instance, might direct his practice to contribute the maximum to a Sec. 401(k) account and credit an additional $65,000 to a cash balance plan, with a corresponding reduction in his compensation. His 55-year-old co-worker could possibly have the business credit $150,000 into the pooled cash balance plan on his behalf, in addition to his Sec. 401(k) and profit sharing contributions (depending on previous contributions), deferring tax on roughly $200,000 in one year. (For more on contribution levels and other considerations for cash balance plans, see “Plan Design in the Balance,” JofA, Jan. 2009, page 40.)

Beyond tax deferral, another reason cash balance plans are particularly appealing to working professionals is the ability to make significant retirement contributions over a compressed period. Medical professionals, for example, often get a late start in accumulating retirement wealth. Medical school and residency training can take seven years or more, depending on one’s specialty, beyond traditional undergraduate education. Physicians most likely accumulate little to no retirement savings during those years; furthermore, they are unable to make up the difference in later years, given the relatively low cap on retirement savings contributions through Sec. 401(k) and profit sharing plans.

Other professional disciplines (e.g., partners in public accounting firms, law firms, and architectural firms) face a similar scenario, where significant investments in graduate education combined with other investments (e.g., purchasing an equity interest in the partnership) delay savings opportunities. Cash balance plans can allow these individuals to significantly increase their retirement savings even over a short time frame without the drawbacks of traditional pensions. This is in addition to the benefits of tax deferral.

Although the annual pay-in does not have to equal the sum of the principal credits, the business must still meet the same minimum funding requirements as other defined benefit plans. Cash benefit plans can be costly to administer since businesses bear the costs of working with actuaries to determine pay-in amounts, in addition to costs of general fund management. Although the Pension Protection Act of 2006, P.L. 109-280, and subsequent IRS regulations have provided greater latitude and certainty to cash balance plans with respect to discrimination laws and interest crediting rates (see “Regulations Update Hybrid Defined Benefit Plan Rules,” JofA, Sept. 18, 2014), companies must still make sure they comply with existing regulations.

When establishing a cash balance plan, it is also important to consider the effect of participation by nonowner employees. For example, a firm that is unable to design a cash balance plan only for owner-practitioners might consider establishing a multitier plan to allow for lower levels of contributions from employees who are not owners of the business. However, any such design decision would need to be (and remain) in compliance with other requirements in the Code, including nondiscrimination rules and minimum participation rules in Secs. 401(a)(4) and (a)(26), respectively.

Proposed legislation could affect the cash balance decision as well. President Barack Obama’s 2015 federal budget request would limit new contributions to all tax-favored retirement accounts (including both defined contribution and defined benefit plans) once the taxpayer has reached the projected payout for a defined benefit plan. If the proposed legislation were passed in its current form, owners of professional practices might have to limit cash balance contributions, depending on other tax-deferred retirement assets. Obama’s 2014 budget contained a similar proposal that did not receive congressional approval.

Cash balance plans are “one of the last, best tax breaks left for closely held business owners,” as described by Elmer Rich III, principal of Rich and Co. in Chicago (online comment in response to “How IRS Rule Changes May Bring an Obscure Retirement Plan Into Prominence,” RIABiz.com). The large potential for annual contributions allows the owner-employees of professional practices to defer significant amounts of income while simultaneously increasing retirement assets in a compressed period, counterbalancing the effect of setting aside less money early in their career. CPAs who serve clients in these types of entities (including accounting firms themselves) should be aware of this robust opportunity for tax deferral and significantly accelerated retirement savings.