U.S. accounting firms are increasingly leveraging technology to run and build their businesses.

That’s one of the nuggets of knowledge unearthed by the 2014 Management of an Accounting Practice (MAP) Survey from the AICPA Private Companies Practice Section (PCPS) and the Texas Society of CPAs (TSCPA). Almost 1,750 firms took part in the biennial survey, which is the largest benchmarking study of its kind.

The JofA covered the main theme of the MAP results in its December issue (“2014 MAP Survey: Firms Experience Growth, Stockpile Cash,” page 30). This article and the accompanying charts share other key survey findings. Full results are available at aicpa.org/mapsurvey.

Making more use of technology 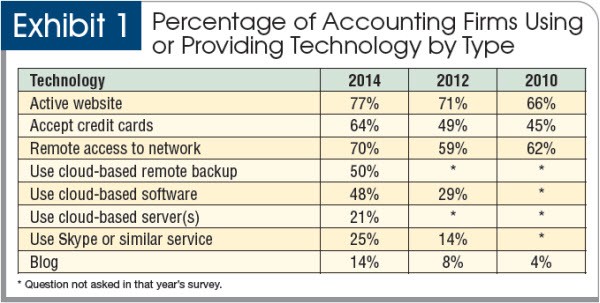 The percentage of firms with an active website continued to rise slowly but steadily, with 77% of all firms reporting that they actively maintain an internet home, up from 71% in 2012 and 66% in 2010. The rates vary greatly depending on the individual firm size segments. The most dramatic growth came among firms with less than $200,000 in annual revenues. More than 60% of those firms reported maintaining an active website, up from about 45% in 2012. Websites are important marketing and business hubs for accounting firms. Many searches for an accountant start with a Google or another web search. Without a website, a firm could be overlooked. The importance of a website is reflected in the fact that more than 80% of firms with more than $500,000 in revenue have one (see Exhibit 2).

The rise of cloud computing was reflected in a number of ways. The percentage of firms using cloud-based software jumped nearly 20 percentage points to 48%. Firms with less than $200,000 in revenue posted impressive cloud usage rates, with 54% using cloud-based software and nearly 60% relying on the cloud for remote backup, the highest rate of any revenue category. The smallest firms also use cloud-based servers and video-conferencing systems such as Skype at a higher rate than all but the largest firms (those with revenue of $5 million or more). The percentage of firms using cloud-based servers ranged from 16% in the $500,000 to $750,000 revenue category to 29% among the largest firms.

High cloud usage in the smallest revenue tier may reflect the predominance of single-owner practices at that level. Those practices likely value the convenience of cloud-based services that don’t require internal IT resources or expertise to maintain. This trend also can be seen in the fact that just 39% of the smallest firms provide remote access to their servers, by far the lowest percentage among the seven revenue tiers.

Sources of revenue for firms

The increasing reliance of the smallest firms on the cloud also can be seen in the breakdown of firm fees by type of service offered. Of firms that offered outsourced accounting and CFO services, the related income accounted for 27% of net fees earned by firms with less than $200,000 in revenue (see Exhibit 3). The use of cloud-based technologies that automate data entry and financial information tracking is key to operating profitably in outsourced accounting services, which were once known as write-up but have emerged in the past couple of years as a growth area for the profession (see “From ‘Write-Up’ to Right Profitable,” JofA, April 2013, page 24). 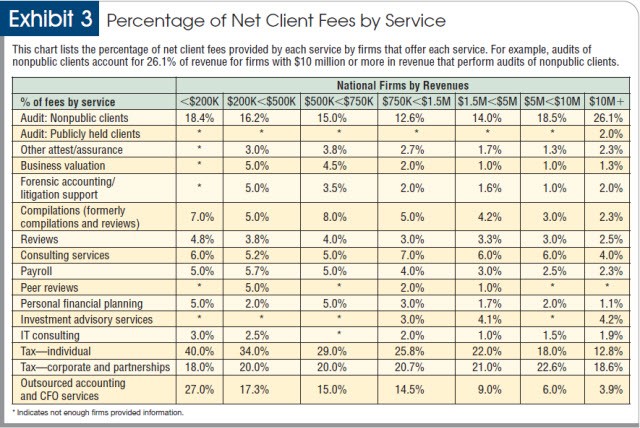 As the JofA reported last month, net client fees rose across the board from 2012 to 2013, with year-over-year growth ranging from 4% to 8%. Meanwhile, net revenue per owner, a profit measure for firms, was larger in all but one revenue category than partner compensation—a reversal of the 2012 MAP results and an indication of firms’ holding back cash to invest in their businesses. That trend returned partner compensation to below 2010 levels (see Exhibit 4). Compensation in 2010, which reflected 2009 financial reports, fell in the aftermath of the Great Recession from highs reached in 2008. The increase in 2012 partner compensation likely resulted from firms’ restoring to partners compensation lost during the recession.

Compensation for other positions generally fell among smaller firms while rising at the largest firms (see Exhibit 5). Billing rates, however, were relatively unchanged across the board for most firm sizes and positions (see Exhibit 6).

Putting the survey to work

Practitioners can use the MAP Survey results to benchmark their firm’s performance against that of their peers. Firm leaders are advised to not only compare their firm’s results with those in their revenue bracket but also with those in the next bracket up. Another good idea is to compare firm performance with that of top performers, which are the top 25% of firms based on net income per partner.

A good approach to making the most of the survey results includes the following steps:

Following these steps can help your firm develop a map for reaching the next level.

The MAP survey tracks firms in seven revenue categories, from the smallest firms, which have revenue of less than $200,000, to the largest firms, which boast revenue of $10 million or higher. The survey was open from May until August. The 2014 results represent median values, a change from the averages reported in previous MAP surveys. While exceptionally high or low data entries, or “outliers,” can disproportionately affect averages, they have little to no effect on medians, which represent the midpoint in the string of data entries (in other words, half the data points are lower or smaller than the median, and half are higher or bigger). The 2014 MAP Survey reports on information from firms’ 2013 fiscal year.

Firms are making greater use of technology to improve client communication and payment options while also granting greater network access to employees.

Among firms that offer the service, tax remains the largest source of client fees for all but the largest firms, where audits account for the biggest piece of the revenue pie. Outsourced accounting and CFO services have emerged as other significant sources of client fees, especially among smaller firms.

Jeff Drew is a JofA senior editor. To comment on this article or to suggest an idea for another article, contact him at jdrew@aicpa.org or 919-402-4056.

The Private Companies Practice Section (PCPS) is a voluntary firm membership section for CPAs that provides member firms with targeted practice management tools and resources, including the Succession Planning Resource Center, as well as a strong, collective voice within the CPA profession. Visit the PCPS Firm Practice Center at aicpa.org/PCPS.