More than $118 billion in gift cards changed hands during 2013, according to CEB TowerGroup. This is great news for the many retailers that sell gift cards; the retailers receive cash upfront in return for providing goods and services at a later time. Financially, a gift card is essentially an interest-free loan from the consumer to the retailer. In accounting terms, the funds received from customers amount to unearned revenues, a liability.

From the consumer’s perspective, gift cards solve the age-old problem of selecting the right gift for that special someone. But gift cards present another problem for accountants. Specifically, how does a company account for unredeemed gift cards, some of which may never be redeemed? At what point should unredeemed gift cards be taken out of liabilities (unearned revenues) and recorded in the income statement? And how should they be recorded in the income statement?

Before May 2014, little guidance was available. This article describes FASB’s new breakage guidance, which applies to gift cards that are within the scope of the newly released Accounting Standards Update (ASU) No. 2014-09, Revenue From Contracts With Customers (Topic 606). The purpose of this article is to offer advice for finance professionals in the wide range of businesses that sell and redeem gift cards.

FASB’s Emerging Issues Task Force (EITF) will consider whether the new revenue standard applies to prepaid cards that may be redeemed only for goods and services at a third-party merchant. The EITF’s next meeting is scheduled for March 19, although it’s not certain that this issue will be discussed on that date. FASB added the topic to the EITF’s agenda in part because some stakeholders said the liability that exists before the redemption of the card at the third-party merchant meets the definition of a financial liability and is therefore outside the scope of the new revenue standard.

Companies cannot recognize revenue upon the initial sale of a gift card because of a key revenue recognition principle that states that revenue is recognized when or as an entity satisfies a performance obligation by transferring a promised good or service to a customer. Therefore, when a company sells a gift card, cash has been received, but goods or services have yet to be provided—the seller records this increase in cash along with a liability for unearned revenue. From there, the company must wait for an event—namely, providing goods or services when the gift card is redeemed—to trigger the recognition of revenue. If the card is redeemed in full within the period immediately following its sale, then the accounting is straightforward: The seller recognizes sales revenue and eliminates the liability (see Example 1, below).

Electronics retailer Company XYZ sells a $200 gift card to customer John Doe on Feb. 12, 2015. On March 23, customer Jane Doe uses the card to purchase a $200 digital camera. The journal entries to record the sale and redemption of the gift card are shown in Exhibits 1 and 2. 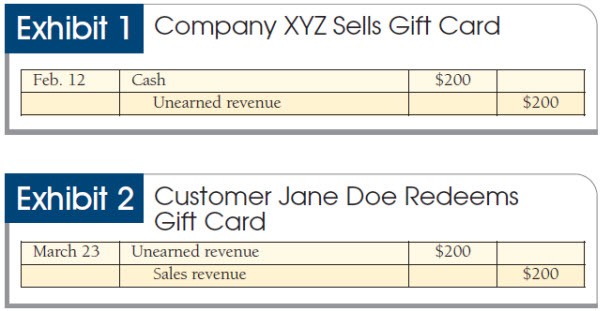 When a gift card’s value is not redeemed by the consumer, retailers (and their accountants) may be stuck waiting for a redemption to trigger revenue recognition, left holding the proverbial shopping bag. It does not seem to make sense for retailers to keep unearned revenues as liabilities on their balance sheet in perpetuity, unlikely to ever have the chance to pay them off. There is big money involved; an estimated $1.18 billion worth of gift cards sold in 2013 are expected to never be redeemed, according to CEB TowerGroup (see Exhibit 3). Many of these cards might have been lost by consumers and will never be exchanged for merchandise. Their earnings process is complete. For this reason, accountants have struggled with how to recognize these unredeemed gift cards as “breakage income.” Enter the standard setters. 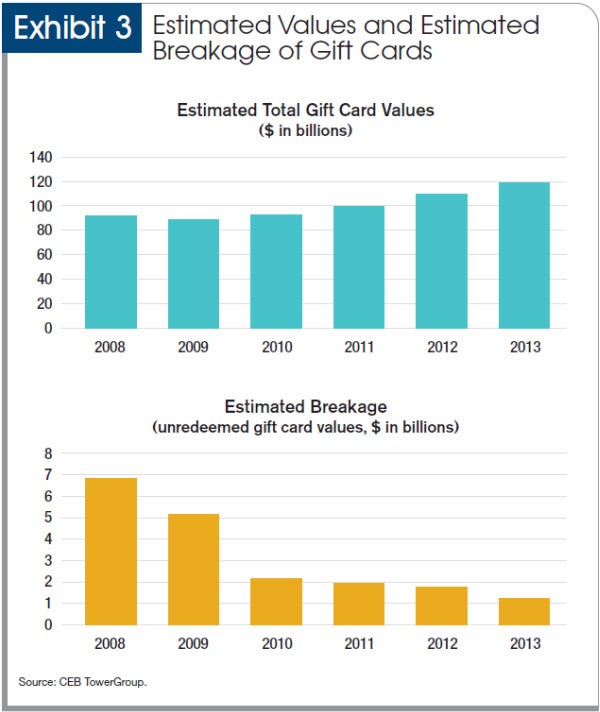 As part of the convergence of IFRS and U.S. GAAP, the International Accounting Standards Board and FASB undertook a joint initiative to clarify key revenue recognition principles and to develop a more common revenue standard for IFRS and U.S. GAAP. In May, this initiative culminated with the issuance of ASU No. 2014-09. The ASU takes effect for U.S. public companies for annual reporting periods beginning after Dec. 15, 2016.

Company XYZ sells $2,400 in gift cards to customers in February 2015. The journal entry for these transactions is shown in Exhibit 4.

Assume that one of the gift cards, with a value of $300, is used on April 6, 2015, to purchase a digital camera with a retail price of $162. When it delivers the digital camera, XYZ immediately recognizes $162 of previously unearned revenue from the gift card.

Of course, in practice, most companies will record income from gift card redemptions as they occur and will record breakage income as an adjusting entry at the end of each accounting period.

To use this new method, accountants need information that is sufficiently detailed to reasonably estimate the total amount of gift card values that will not be redeemed. “Many retailers operate in a very fast-paced, continuously growing environment,” said Alison LaChac, CPA, a former chief accountant with retailers Massimo Dutti USA and Zara USA. “While point-of-sale systems typically capture all of the necessary information, such as the state of origin and sale date, gift card purchases are immediately recorded in the aggregate, so accountants may have trouble collecting sufficient detail to analyze the aging and usage data necessary to estimate breakage rates.” Firms that cannot collect enough data to construct this reasonable estimate cannot recognize breakage income until the likelihood of gift card redemption is deemed to be remote.

Recognizing revenue when redemption is deemed remote. A firm may recognize breakage only in proportion to the value of actual gift card redemptions if it is probable that doing so would not result in a subsequent significant revenue reversal. The FASB Accounting Standards Codification (ASC) glossary says that an event is “probable” if “the future event or events are likely to occur.” If a firm does not expect to be entitled to breakage (i.e., it is not probable), then it cannot recognize revenue until it judges that the likelihood that the remaining card balance will be redeemed is remote, based on an unusually long period of inactivity. The ASC glossary says an event is “remote” if “the chance of the future event or events occurring is slight.”

ASU No. 2014-09 also contains guidance on how to report gift card activity in the income statement, specifying that companies should include both income from gift card sales and breakage income as part of sales revenue.

Escheatment and the new standard

The illustrations presented up to this point apply to situations where the company is allowed to keep the full amount of the unredeemed cards. While most states currently exempt gift cards from escheatment laws, a number of states have enacted abandoned property laws for unredeemed gift card balances, typically after a dormancy period of either three or five years. Some states require retailers to turn over the full unredeemed value of gift cards, while others require retailers to surrender a percentage of the unredeemed value, typically 60%, allowing the retailer to keep the rest. Therefore, companies may recognize breakage income only to the extent that they are not required to turn the amounts over to a state.

Further complicating matters is the determination of which state’s law applies when more than one state is involved in the transaction, such as when the purchaser of the card lives in a different state from where the card was purchased or where the company is incorporated. The general rule in these situations is to first follow the escheatment laws of the state where the purchaser lives, if that information is on record. If the purchaser’s home state is unknown, or if that state does not escheat gift cards, the state where the business is incorporated can enforce its escheatment rules. If neither state escheats gift cards, the state of sale may step in and exercise its right of escheat.

Examples 3 and 4, respectively, illustrate cases of 100% and 60% escheatment.

If the balance of the unredeemed cards is subject to full escheatment, the company is precluded from recording any breakage income. It must forward the cash received for the cards to the state and remove the corresponding liability from its books. The new FASB pronouncement does not affect this accounting.

Company XYZ sells a $200 gift card to a customer on Feb. 12. After a number of years with no activity on the card, the company determines that, based on the laws of abandoned property where the customer lives, the company is required to turn over the full amount of the unused balance to the state. The company will record the entries shown in Exhibit 6 to reverse the entries shown in Exhibit 1, which initially record unearned revenue.

Now consider a case in which the state with jurisdiction enforces escheatment laws for gift cards for 60% of unredeemed values. In this case, companies would be required to employ the new pronouncement while accounting for the fact that 60% of the breakage amount would be turned over to the state. In this case, the accounting is similar to Exhibit 5 with an adjustment for the amount of the unclaimed property the firm would be allowed to retain.

Gift cards are popular with consumers; cards worth billions of dollars are purchased every year. But they can cause headaches for CPAs working at firms that sell and accept gift cards.

New revenue recognition guidance provides a clearer path for recognizing breakage income for unredeemed gift cards that fall within the scope of the new standard. The revenue recognition standard released last year by FASB and the International Accounting Standards Board links the recognition of breakage income to the proportionate value of actual gift card redemptions. FASB’s Emerging Issues Task Force (EITF) will consider whether the new revenue standard applies to prepaid cards that may be redeemed only for goods and services at a third-party merchant.

If an organization does not expect to be entitled to breakage income, then it cannot recognize revenue—until it judges the likelihood to be “remote” that the card’s balance will be redeemed.

The new standard guides organizations on how to report gift card activity on an income statement. It says companies should classify income from gift card sales and breakage income as sales revenue.

Many companies will need to reclassify breakage income to be reported as part of sales revenue. Companies must also be aware of state-by-state escheatment laws.