Make sure the starting line for deductibility reflects the company’s role in the development process.

Determining when a company starts business would seem a rather simple task. Stakeholders form a company, raise capital, purchase equipment, and manufacture and sell products to generate revenue. Companies that accomplish these steps in a relatively short time obviously intended to pursue a profit and commit to starting a business from the date the entity was formed. Making such a determination for startup life science drug product development companies—for which the time from company formation to the sale of a drug product often spans 15 years or more and the cost of development averages $350 million—is anything but simple ("The Cost of Creating a New Drug Now $5 Billion, Pushing Big Pharma to Change," Forbes, August 2013, available at forbes.com.

The life cycle of a new drug product being developed by a startup life science company has five distinct segments: drug discovery and lab research, preclinical testing, clinical trials, precommercialization, and commercialization. The first three segments, on average, take 13.5 years to complete and consume $332.5 million ("How to Improve R&D Productivity: The Pharmaceutical Industry's Grand Challenge," Nature Reviews/Drug Discovery, March 2010, page 203). For every drug that gains final approval by the U.S. Food and Drug Administration (FDA), as many as 10,000 potential drugs are investigated in the initial segment of the development cycle, with 250 to 300 reaching the second segment of preclinical testing (see "New Drug Development Cycle"). Most life science companies formed around a new drug product concept are either acquired for their intellectual property prior to commercialization or simply dissolve due to failure to develop a commercially viable drug product. As a result, it is estimated that only 8% of startup life science companies successfully make it from the drug discovery phase to the commercialization phase ("A Billion Here, a Billion There: The Cost of Making a Drug Revisited," Forbes, November 2014, available at forbes.com. The majority of life science companies that fail to produce a new commercial drug product therefore will capitalize their startup costs and most likely never start amortizing them.

A company incurs organizational expenses necessary to get it up and running, such as legal fees to register with the state. After formation, a company will typically incur startup costs before it begins an active trade or business, such as marketing costs or costs to train employees. Generally, under Sec. 162, companies can deduct ordinary and necessary expenses paid or incurred during the tax year in carrying on their trade or business.

In general, under Sec. 195(c)(1), startup costs are amounts otherwise deductible as a trade or business expense (other than interest, taxes, or research and experimental expenditures) that are paid or incurred in connection with:

This raises a key question for a startup life science company developing a new drug product—or any company that will require a long time to develop its product: When does business start under Sec. 195?

The classic case often referenced in this area is Richmond Television Corp., 345 F.2d 901 (4th Cir. 1965). The company was organized in 1952 to operate a television station and applied for a broadcast license that same year. It received its broadcast license and began broadcasting in 1956. Between 1952 and the time it received the license in 1956, the company incurred employee training expenses and expenses to obtain the broadcast license. The company argued that the deductions were ordinary and necessary expenses related to its business and that the expenses could be currently deducted under Sec. 162 in the years they were incurred.

The Fourth Circuit disagreed, finding that a taxpayer "has not engaged in carrying on any trade or business within the intendment of section 162(a) until such time as the business has begun to function as a going concern and performed those activities for which it was organized" (internal quote marks omitted). Applying this rule, the court concluded that the expenses were not deductible because, before the taxpayer received the license, "there was no certainty that [the taxpayer] would obtain a license, or that it would ever go on the air" (Richmond Television Corp., 345 F.2d at 907). In effect, while Richmond Television Corp. had decided to enter into business, it failed to prove that it had started to function as a going concern or could reasonably anticipate becoming an active trade or business when it incurred the expenses.

However, not all courts have followed the "going concern" test set out in Richmond Television. Deciding when an active trade or business begins is ultimately a question of fact, and in other relevant cases and IRS guidance, the determination appears to depend on the type of business. The following cases and guidance illustrate how courts have held various businesses should determine when their active trade or business begins.

In Manor Care, Inc., 490 F. Supp. 355 (D. Md. 1980), the District Court for the District of Maryland held that the taxpayers could be considered to be engaged in carrying on a trade or business before the business technically opened its doors to the public. In Blitzer, 684 F.2d 874 (Ct. Cl. 1982), the Court of Claims stated that recurring expenses to maintain a low-income housing business should be deductible "whether or not the business has yet completed construction or acquisition of its income-producing asset" (Blitzer, 684 F.2d at 880).

In Letter Ruling 9047032, the IRS determined that a manufacturer's trade or business began when substantially all of the parts used in the company's manufacturing process met the manufacturer's quality standards and it could begin producing goods to be sold. Effectively, the IRS stated that the actual sale of goods to the public is not the definitive test of when a trade or business begins; rather, having all critical components of the manufacturing process in place and being ready to commence production determines it.

In Rev. Rul. 81-150, the IRS determined that a company formed to build an offshore drilling rig and engage in a contract with a major oil company could not deduct expenses until the drilling rig was completed and drilling started. Similarly, in Technical Advice Memorandum 9414004, the IRS National Office concluded that an electric utility company began business when the company's new plant began to generate electricity for sale to customers.

In McManus III, T.C. Memo. 1987-457, the Tax Court determined that carrying on a trade or business requires (1) the intention of making a profit, (2) being regularly and actively involved in the activity, and (3) having commenced business operations.

Although the cases described above deal with taxpayers other than life science companies, the key concept that determines when an active trade or business starts is the same. In each case, the company was formed to perform a specific business operation and produce a product or service—such as product manufacturing, oil rig drilling, or electric energy generation. In the case of a life science company, one must consider what the company's business is. If it is formed to sell a product, then the test of when a business starts (analogous to Richmond Television Corp.) might be FDA approval to sell and market the new drug product. If a company is formed to research a specific disease or condition, then the test of when the business starts might be the initial research.

Even though startup costs captured in the tax cost basis of the entity are eventually recognized at the entity's sale or dissolution, precommercialization life science companies may have difficulties in the meantime because they are generally funded with various rounds of financing by which they research and develop new drug products. This may cause the entity to have a mismatch in the timing of its income and expense recognition that could result in a federal income tax liability. For example, if the company enters into a preclinical-trial joint venture agreement to receive milestone payments toward filing an investigational new drug application with the FDA, the milestone payments could result in taxable income with insufficient current-year expenses to offset it. The company could inadvertently experience a worst-case scenario of limited cash, limited tax deductions, and a pending income tax liability.

Alternatively, the company could carefully consider the business purpose at formation to determine whether, realistically, it will achieve only a segment or certain segments of the new drug product development life cycle. It might, for example, determine that it will only perform research to determine proof of concept. Under this fact pattern, the company would most likely be an active trade or business once any research is performed, resulting in little or no capitalization of startup costs. This effectively eliminates the need to match startup costs with revenues, as generated net operating losses are reported and carried forward.

A life science company also could match its startup costs with revenues by forming an entity to undertake a joint venture with an established pharmaceutical company to commercialize a new drug product. The company would enter into a collaboration agreement upon successful results of a phase II or III clinical trial. This would most likely move the start of business to the end of the preclinical-trial segment and match potential revenue streams with amortization of startup costs.

The typical application of Sec. 195 to startup life science companies involved in the research and development of new drug products can result in a mismatch of startup costs and revenue, due to the long life cycle of drug development, significant startup costs, and the high rate of acquisition or dissolutions. When forming a startup life science company, stakeholders should consider the most likely initial revenue stream and the potential benefits of establishing its source as the company's primary business purpose. This could avoid the need to capitalize any startup costs, as the company's initial activities could result in the establishment of an active trade or business. In some situations, capitalizing costs under Sec. 195 may be preferable, as, for example, when an ownership change is anticipated. 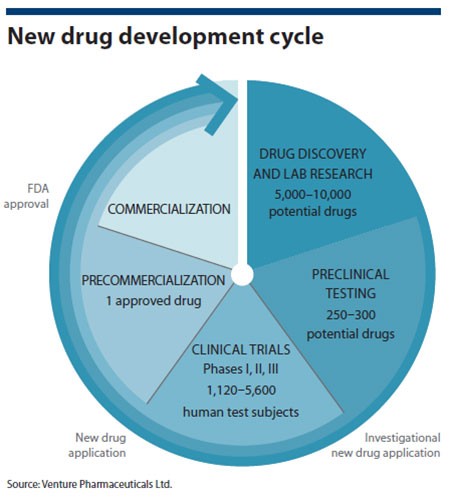