First woman to lead a Big Four firm in the U.S. discusses the path she took. 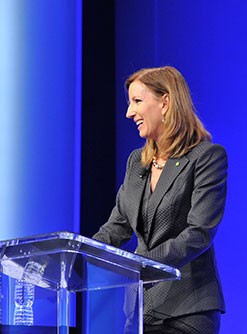 Cathy Engelbert, CPA, became the first female CEO of a Big Four audit, accounting, and consulting firm in the United States on March 11 when she took the helm of Deloitte LLP. In an interview, she told the JofA of a time early in her career when she nearly decided to leave public accounting, and she shared her thoughts on what it takes to achieve career success. Here is an edited version of the discussion:

“I was a senior manager, pregnant with my first child. I would have been up for partner that year. I was trying to figure out what my career would look like in the future, and trying to figure out if I could balance my career and parenting at Deloitte, or would I balance it in the corporate world? I did consider a very large corporate job … something that was attractive. When it came down to it, I thought about culture, I thought about Deloitte and, quite frankly, the women’s initiative that started in the ’90s when this was all happening, and I wanted to continue to be a part of that. And it was the best decision, quite frankly, I ever made…”

“Take risks in your career, do something different so you build your capabilities, build your followership, build your leadership skills, and have passion for what you do. … It’s all about the skill set that you might want to build. At one point I decided to go to our national office, so I moved from Philadelphia to Connecticut. At another point I decided I had built, through working with FASB and the AICPA when I was in our national office, a niche with financial instruments. So I went into our consulting business for four years. I think it’s all about what capabilities you want to build. Some of our people do global assignments. Some of our people, again, cross over into our different businesses. Some want to serve in tax versus audit. Some want to do both. I think it’s all about building a broader capability so you are viewed as a leader and you have that followership going forward as you go up the ranks.”

Click here to read more about Cathy Engelbert and her vision for Deloitte LLP.