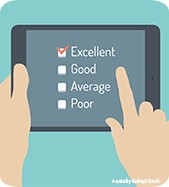 For the second year in a row, the beginning of income tax filing season was delayed. This year, the delay was due to a 16-day partial government shutdown in October 2013 that resulted in a Jan. 31 start date for the IRS to accept electronically filed returns. Other complicating factors included the advent of the net investment income tax, the new 39.6% top tax rate bracket, and the return of the itemized deduction limitation and personal exemption phaseout.

Software vendors nonetheless managed to roll out their updated versions on time, and users were generally satisfied with the results obtained with the products.

Of the 3,833 CPA respondents who indicated that they prepared tax year 2013 returns for a fee, 3,817 predominantly used one of 15 software products identified by the survey; of those, users of each of eight products identified in Exhibit 1 (“major products”) made up at least 1% of the responses. This year they include CCH Axcess Tax (1.4%), which was not represented in the 2013 survey. The three products with the greatest number of users were in nearly a dead heat: Lacerte, ProSystem fx, and UltraTax CS, which accounted for 24%, 22%, and 24% of respondents, respectively. ProSeries was used by 11% of respondents and Drake by 9%, both higher than in 2013. Notably, the share of ATX users dropped markedly from 11% in 2013 to 4% this year, likely the result of serious performance problems with a new version last year. However, 2014 users of ATX reported a satisfaction average rating of 4 on a 5-point scale, which, while slightly below that of most other products, represented a significant rebound from the 2.1 rating in 2013. Users of GoSystem Tax RS accounted for only 2.8% of respondents, down slightly from 3.5% in 2013. Other products asked about but whose users accounted for less than 2% of all responses combined were Intuit Tax Online, TaxAct, TaxSlayer Pro, TaxWise, and TurboTax.

Users of all major products combined gave their software a rating of 4.3 out of 5, which is higher than in 2013 (4.1). Users of UltraTax CS and Drake gave their software the highest rating (4.5), followed by users of Lacerte (4.4). Other than ATX, the overall ratings for each major product and ratings in particular areas this year, such as ease of use and updates, were not significantly different than for 2013 ( Exhibit 1).

As in past years, a relatively high percentage of users of Drake software named its price as its best feature (50%), with ATX also appealing strongly to the budget-conscious CPA (40%) (see Exhibit 2). Drake users were also more likely than users of any of the other major products to name product support as its best feature (23%). Twenty-seven percent of ATX users liked its ease of use best, doubling its percentage from last year. Nearly 16% of ATX users liked its support least; still, that represented a major improvement over 2013, when more than one-third of its users named support as its least-liked attribute. 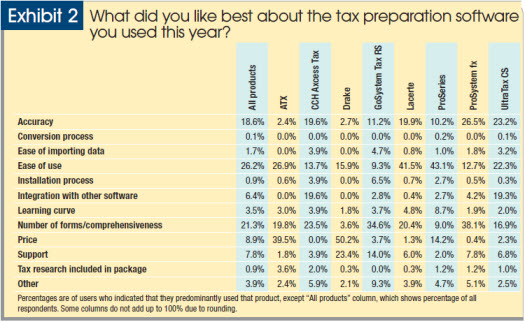 As in previous years, users of Lacerte and ProSeries were most favorably disposed toward those products’ ease of use (42% and 43%, respectively). However, for Lacerte, price was seldom picked as a virtue (1%). Correspondingly, when asked what they liked least about their software (Exhibit 3), users of Lacerte gave price as a stronger dislike than any other attribute by users of it or any other product (67%). That is up slightly from 2013, when 62% of Lacerte users primarily faulted its price. However, Lacerte users found little else to dislike about the product. 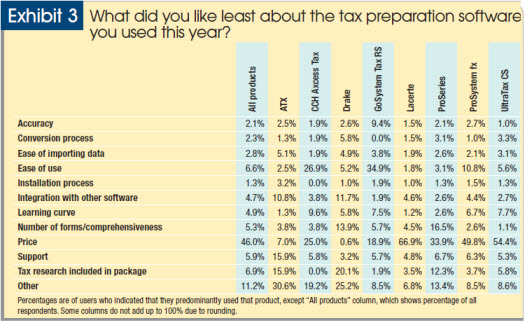 Price aversion was also strong for UltraTax CS, with 54% of users naming that feature as least liked, along with ProSystem fx (50%) and more than one-third of ProSeries users.

One-quarter of users of the newcomer in the tally, CCH Axcess Tax, most disliked its price, and another 27% did not find it easy to use. However, a relatively high percentage of its users best liked its number of forms and comprehensiveness at 24%, behind only ProSystem fx (38%) and GoSystem Tax RS (35%).

Asked to rate their product’s ease of use, Drake and Lacerte users gave those products the highest ratings, 4.4 ( Exhibit 1), with GoSystem Tax RS and CCH Axcess Tax rated lower than others (3.2 and 3.4, respectively). Drake users were more enthusiastic than users of other software in their ranking of its ease of update/installation and how well it handled updates to forms (the only 4.8 ratings in Exhibit 1), as well as for paperless e-filing including PDF attachments (the highest rating for this feature, at 4.7). When users were asked to rate their software’s integration with accounting and other software, UltraTax CS came out on top, with a 4.1, compared with 3.7 for CCH Axcess Tax, 3.6 for ProSystem fx, 3.5 for Pro Series, and lesser ratings for the others.

Asked whether they planned to use the same software again next year, an average of 83% of users of all major products said “yes,” and another 13% were unsure. The highest percentage of unqualified “yes” responses were for Drake (95%) and UltraTax CS (93%), followed by ProSystem fx (88%). The other major products were in the 70%–79% range, except for Lacerte, where there was significant uncertainty about whether to continue with it. Lacerte had the highest percentage of users saying they did not know if they would use it again (25%) and the lowest percentage certain they would use it next year (69%).

The survey also asked whether respondents used a new product in 2014 and, if so, which product they used in 2013 and switched from (Exhibit 4). Although the number of respondents answering “yes” to this question was relatively small (245), other data related to attitudes toward price described above support the findings here that price was often a major reason for switching for a majority of switchers from UltraTax CS (56%) and Lacerte (51%) and a large plurality of former users of ProSeries and ProSystem fx (both 48%). Worth noting, however, is that while these percentages are high, they are not as high as in last year’s survey, when 62% of switchers from UltraTax and 63% of former Lacerte users gave price as a reason. 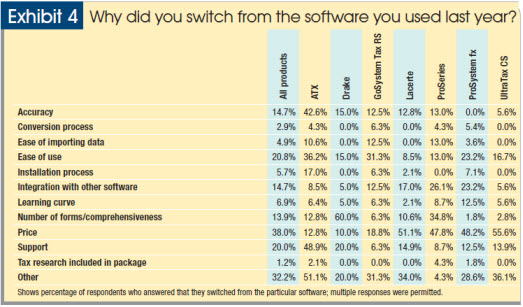 Conversely, only 10% of former users of Drake gave price as a reason for discontinuing it; however, the largest single reason (in percentage terms) given for switchers from any major product was by former Drake users who faulted its number of forms/comprehensiveness (60%). This question was also a chance to examine in more detail why former users of ATX dropped the product. Unsurprisingly, 43% said accuracy of the 2013 product was a reason; less expected was that 49% gave price as a reason. ATX also had the highest percentage of “other” write-in reasons to this question at 51%, many of them citing its previous stability and performance issues.

As in prior years, Drake users were most likely to name their software as best for a new practice (92%), followed this year by ATX and UltraTax CS (both 74%), ProSeries (71%), and Lacerte (61%). Assuming a new practice generally is a small one, those percentages may reflect in part the size of practices using each product. Nearly 98% of ATX users, 94% of Drake users, and 88% of Pro Series users were in firms of five or fewer preparers, with many of them in solo practices (52%, 41%, and 41%, respectively). On the other hand, GoSystem Tax RS was the only major product with a significant percentage of users in firms of more than 500 preparers (29%). Correspondingly, GoSystem Tax RS was by far the least likely to have been chosen by the respondent, with 61% of users having no involvement in the decision. The newcomer in the tally, CCH Axcess Tax, was used predominantly by midsize firms, with 46% of users in firms of six to 20 preparers and 19% in firms of 21 to 100 preparers.

Questions about cloud technology and computing platforms showed few signs of change from previous years, with most respondents (89%) saying client data resided on their own network, server, or computer, rather than on the vendor’s server (11%) (Exhibit 5). Respondents again showed little inclination to want their product to be available on a tablet device, with only 34% saying they favored this option, compared with 35% in last year’s survey. Since downloading via the web is now the predominant method of installing software to a practice’s network or computer, the survey discontinued asking about it versus other methods, such as by compact disc. 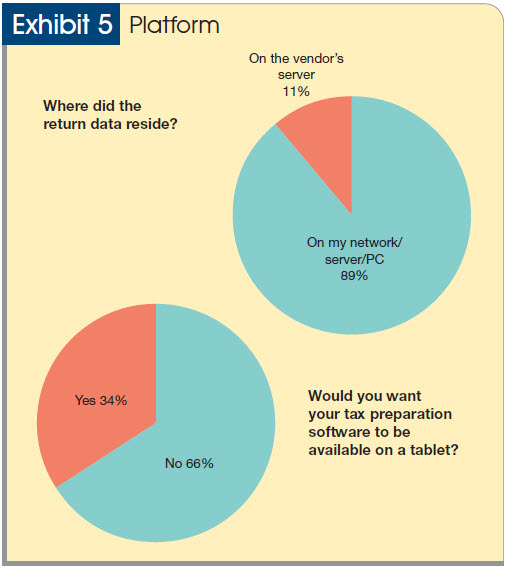 Users of ATX were less likely than those of most other major products to report needing technical support this year (79%). Only ProSeries was lower (72%), and the average for all major products was 85% (Exhibit 6). Again, this suggests ATX was relatively free this year of the problems encountered by users the previous year (when the percentage seeking technical support was 92%). As in prior years, most troubleshooting was done by telephone (79% for all major products), although newer forms of communication with support personnel continued to grow. Electronic chat or instant messaging was used 19% of the time, up from last year’s 16%. 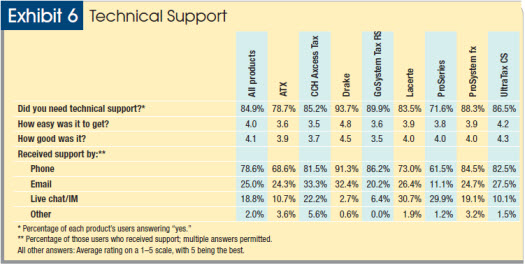 One-quarter of major products’ users on average received training in their software, but with a wide range among products. CCH Axcess Tax had the highest percentage at 61%, followed by Drake at 44%; Lacerte had the lowest at 11%. Those who did receive training generally rated it favorably, with an average 4 out of 5 for all major products.

The survey was conducted from April 29 through June 2, 2014, and received 3,833 responses from practitioners who indicated that they prepared tax year 2013 returns for a fee. The exhibits show detailed answers for eight of the 15 products included in the survey. Information and ratings for products that received less than 1% of responses were not included in this article, but full survey results for each product are available online at tinyurl.com/2014softwaresurvey.

Paul Bonner is a senior editor, tax, for the JofA and The Tax Adviser. To comment on this article or to suggest an idea for another article, contact him at pbonner@aicpa.org or 919-402-4434.