What tax preparers need to know about digital currency

Not long ago, few people had heard of bitcoins or digital currency. Now, digital currency routinely makes the headlines. Retailers such as Overstock.com, some sellers on online marketplace Etsy.com, and many other businesses now accept bitcoins as payment. By December 2013, it had been estimated that more than 1 million individuals had bitcoins, and about 10,000 people each owned more than $10,000 worth (Business Insider, Dec. 10, 2013).

Many of these individuals will be entering a tax preparer’s office without realizing that their bitcoin activity has tax consequences, making it imperative for tax professionals to have a basic understanding of bitcoins and to identify clients engaging in bitcoin transactions. Recent IRS guidance covers basic questions of such transactions’ tax treatment.

Digital currency, or e-currency, is an electronic medium of exchange of which bitcoin has become the most widely circulated. Bitcoins use cryptography (mathematically created proofs to provide security, similar to online banking) to mitigate double-spending, a common problem for digital currencies. Individuals install a bitcoin virtual wallet on their computer or mobile device, thereby creating a unique bitcoin address. Bitcoins exist only as a numerical and alphabetical sequence. Wallets have both a public and a private address; the public address can be given to receive bitcoins in a wallet, while the private address, also known as the private key, is necessary to spend or transfer them from the wallet. For more, see bitcoin.org.

More than 12 million bitcoins currently exist, with more than 1 million bitcoin wallets created (the number of users is impossible to estimate since one user can create multiple wallets). With the market value of one bitcoin near $800 at the end of 2013, the total value of bitcoins exceeded $12 billion. However, their value has been volatile in recent months, potentially resulting in substantial gains or losses, even on small investments. According to coindesk.com, the market price of bitcoins spiked in November 2013 to more than $1,000, before falling back below $600, rebounding, and then falling again in February 2014. (The price fell to as low as $360 in early April but bounced back to around $500 by mid-April.) The price decline so far this year reflects security vulnerabilities and thefts from several online sites, most notably the theft—allegedly by one or more hackers—of an estimated 850,000 bitcoins from the leading bitcoin trading exchange, Tokyo-based Mt. Gox, causing it to close and seek bankruptcy protection in February. Because payment processing and other aspects of bitcoins exist in a largely unregulated “gray market,” holding them may also pose a risk of theft loss. 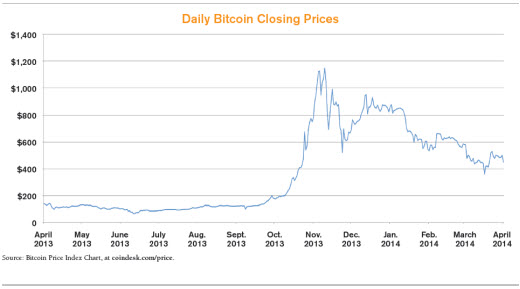 While CPA tax preparers’ clients often receive Form W-2, Wage and Tax Statement; those in the Form 1099 series; and other income reporting forms, they might not receive documentation reporting income from bitcoin transactions (although the IRS guidance, described below, indicates that where information reporting is otherwise applicable, they should). This may lead some clients to incorrectly believe that such transactions lack tax consequences. A U.S. Government Accountability Office report identified noncompliance risk to “include taxpayers not being aware that income earned through virtual economies or currencies is taxable” (Virtual Economies and Currencies: Additional IRS Guidance Could Reduce Tax Compliance Risks, Rep’t No. GAO-13-516, May 15, 2013). Furthermore, gains on bitcoins may be triggered by using them to purchase goods rather than selling them for cash, which differs from most investments held by clients. These factors make it important for tax preparers to ask their clients about any bitcoin or other digital currency transactions.

Ideally, a direct question related to digital currencies would be included in the standard client tax organizer. While most tax organizers request information on the sale of investments and on barter transactions, clients may not readily identify digital currency such as bitcoins as an investment or a barter arrangement.

On March 25, the IRS issued Notice 2014-21 regarding “the tax consequences of virtual currencies,” including bitcoins. According to the notice, such currencies are treated as property for federal tax purposes, for which taxpayers generally should apply tax principles of property transactions.

Tax preparers should take the following actions with each tax client:


Bitcoins and other digital currencies are gaining popularity and becoming more prevalent, and more bitcoin users will likely emerge. A new challenge for tax preparers is to identify which clients have engaged in such transactions and determine the appropriate tax treatment.