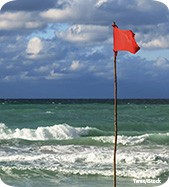 At some point in nearly every CPA’s professional experience, he or she encounters a transaction or situation that stands out from the others—one that just doesn’t make sense. Many of these occurrences turn out to be erroneous or to have an unobvious, yet legitimate, reason behind them. But some have a more sinister explanation. Do you know how to spot the red flags of a fraudulent transaction? Are you able to effectively evaluate the warning signs? Take this quiz to test your knowledge of the techniques that can help detect and analyze potential fraud.

1. Confirming customers’ outstanding account balances and examining journal entries for false write-offs of accounts receivable would be most helpful in detecting which of the following schemes?

2. Which of the following circumstances best indicates that contractors are colluding to manipulate the contract bidding process?

3. During an audit of ABC Wholesale Inc., Leanna, CPA, identifies several sales transactions that were canceled after the merchandise was recorded as having been shipped. Additionally, she notes that the company’s cost of goods sold unexpectedly increased as a percentage of sales. Which of the following fraud schemes are these findings most likely to indicate?

5. A nonlinear relationship between sales and returns and allowances over a period of time, when the relationship is expected to be linear, might indicate that a cash larceny scheme is taking place.

6. Grey Co.’s management is engaging in a financial statement fraud scheme in which revenue is being artificially inflated, with the corresponding debit recorded to fixed assets. All of the company’s sales are made on credit. Which of the following effects does this scheme have on the accounts receivable turnover?

7. Which of the following is the most common way that corruption schemes are detected?

8. Beatrice, the accounting manager at Ajax Inc., just received a phone call from one of the company’s vendors regarding numerous instances in which duplicate payments were received from Ajax during the last several months. The representative said the vendor needs the duplicate payments to stop, as continually issuing refund checks for the extra payments is making its accounting processes quite difficult. Beatrice then checked the vendor’s account on Ajax’s books, but she noted no sign of duplicate payments or refunds. Which of the following fraud schemes does this situation most likely indicate?

a. A check-tampering scheme.
b. Skimmed payments.
c. An understated-expense scheme.
d. A pay-and-return scheme.

1. (b) Skimming schemes involve the theft of incoming cash receipts before they have been recorded as received on the company books. In a scheme in which a perpetrator steals incoming customer payments, the theft results in a customer account balance that is overstated; that is, the amount the customer truly owes is less than the amount reflected on the customer’s account receivable. Consequently, confirming outstanding account receivable balances directly with customers can help identify any accounts on which a payment was made but was diverted before being recorded. In addition, a fraudster who is skimming customer payments might attempt to conceal the theft by adjusting the accounts receivable balance through credits or write-offs to certain customer accounts. Analyzing adjusting entries made to accounts receivable can uncover any credits that were recorded without authorization or justification and that thus merit further investigation.

2. (d) Some dishonest contractors collude with one another to circumvent the competitive bidding process in order to remove other vendors from the competition for contracts or to artificially inflate the prices of goods and services. As a result of these schemes, the procuring entity loses the benefits of free and open competition, including fair pricing, reasonable performance, and transparency in the procurement transactions. Some common red flags that can indicate collusion among contractors include the following:


3. (a) To conceal a theft of inventory, the perpetrator might record false sales transactions to make it appear the missing goods were sold rather than stolen. The downside of this approach is that the books reflect a payment due from a customer for the fictitious sale—a payment that will obviously never be received. The perpetrator can mitigate this red flag of the scheme if he or she is in a position to subsequently adjust the fictitious transaction, such as by canceling the sale after the goods are shown as having been shipped. Although such an adjustment still leaves a trail in the form of canceled sales for which the merchandise was shipped, such an anomaly is less likely to be detected without targeted audit procedures than uncollected receivables would be.

An unexpected increase in cost of goods sold as a percentage of sales is another common byproduct of an inventory theft scheme. Inventory shrinkage, including that caused by theft, must eventually be accounted for on the company books, often through a debit to the cost of goods sold account. Unless the perpetrator also records and leaves fictitious sales on the books, such an entry results in cost of goods sold increasing without a corresponding increase in sales. When this trend is noted without a reasonable explanation (e.g., an increase in the purchase price of inventory), it should be explored for additional signs of fraud.

4. (c) In a ghost employee scheme, an individual who does not work for the organization is added to the payroll to generate fraudulent paychecks, which are then intercepted by the scheme’s perpetrator. When setting up the ghost employee in the payroll file, the perpetrator often simply uses his or her own address, Social Security number, or other identifying information; consequently, the presence of duplicate records for these fields can be a red flag of a ghost employee scheme. Additionally, ghost employees often have no taxes, insurance, or other normal deductions withheld from their paychecks. Consequently, identifying employees who have no payroll deductions taken can be an easy and effective method for uncovering payroll manipulations.

5. (a) In general, there should be a linear relationship between sales and returns and allowances over a given period. Without a valid explanation, such as a known product defect, a nonlinear relationship between these amounts might point to a fraud scheme. Cash larceny is one potential scheme that can affect this relationship; these schemes involve the theft of incoming payments that have already been recorded on the victim company’s books. To conceal these schemes, the perpetrator often records a sales return or allowance as a way to justify the removal of the missing money. Consequently, an unexpected increase in the amount of returns and allowances, especially without a corresponding increase in sales, can indicate that a cash larceny scheme is occurring and thus merits further scrutiny.

7. (b) According to the 2014 Report to the Nations on Occupational Fraud and Abuse by the Association of Certified Fraud Examiners, 42% of corruption cases are detected by tip (see acfe.com/RTTN for the full report). In contrast, management review, the second most common detection method for corruption cases, uncovered 16% of these schemes. External audits and reports from law enforcement accounted for far fewer discoveries of corruption, just 3% and 2%, respectively, of these schemes.

Additionally, of the whistleblower tips that led to the investigation of the cases, 49% of those tips came from an employee, and another 15% came from an anonymous source. Consequently, it’s extremely important to include material specifically on the warning signs of these schemes in an organization’s employee antifraud and compliance training programs. Some warning signs that employees should be made aware of include:


8. (d) Pay-and-return billing schemes are a form of false billing in which the fraudster intentionally manipulates the payment on a legitimate invoice to a real vendor, requests a refund for the overpayment, and diverts the refund for personal gain. The payment manipulation might take the form of an overpayment, a duplicate payment, or a payment “accidentally” sent to the wrong vendor. To cover schemes involving duplicate payments on the company books, the perpetrator often creates a fictitious vendor with a name very close to the name of an existing vendor and records the second payment on the fake vendor’s account. Consequently, tests to identify vendors with duplicate or very similar names and to detect payments to unapproved vendors can be extremely useful in identifying these types of schemes.

If you answered all eight questions correctly, congratulations. Your thorough knowledge of the hallmarks of fraud will help you effectively identify potentially fraudulent conduct. Keep up the good work.

If you answered six or seven questions correctly, you’re on the right track. Continue to build on your knowledge of fraud detection and investigation.

If you answered fewer than six questions correctly, you may want to brush up on your antifraud knowledge. Enhancing your understanding of the red flags of fraud will help ensure that you have what it takes to keep fraud from going unnoticed.