Pay for finance chiefs rises, but lack of clarity about bonus determination rubs some the wrong way. 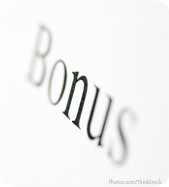 Get a B on a math test, and you understand how that grade was determined: You got 88% of the answers correct. Get a B on an art project, and you’re wondering exactly what could have been better or what the instructor was looking for.

CFOs would rather be graded in math, at least when it comes to determining their annual bonuses. They want to know what needs to be achieved, and, based on those achievements, they want to know how big their bonus will be.

But bonuses are determined not only by hard and fast financial metrics but also by less quantifiable standards. And that is leading some finance chiefs to have a sort of bonus blindness.

Subjective bonuses, more common at smaller, private companies in the United States, have a negative effect on how CFOs feel about the design of their compensation plans, according to the 2013 CFO Compensation Survey, released by the AICPA and Arizona State University.

In the survey, conducted by Michal Matějka, a professor at the W.P. Carey School of Business at Arizona State, 58% of private-company CFOs’ bonuses were based on meeting financial performance goals, 13% were contingent on explicit nonfinancial targets such as customer satisfaction or safety targets, and 27% were awarded subjectively. The remaining small percentage were funded in other, unspecified ways.

The report showed that CFOs who were highly dissatisfied with the design of their compensation packages had 40% of their bonuses awarded subjectively, compared with 25% for satisfied CFOs.

What should a dissatisfied finance professional do if his or her company isn’t budging on the fuzziness of its compensation plan design? Perform better, and ask more questions. Sounds simple, but those two actions can create clarity.

“We talk about benchmarks, but it’s really about performance,” said Mark Rosen, CPA, the managing director at compensation consultancy Pearl Meyer & Partners. “If you have high performance, people generally don’t care about what you get paid. If you perform poorly, people really care what you get paid. That message gets lost in the noise … of how pay structures are set up and how we can align. If you’re not performing, it really doesn’t matter.”

CFOs have to expect some discretion in the determination of bonuses. Some parts of a bonus may be tied to performance relative to a group of industry peers, which won’t be known until the end of the year as information about company and peer performance becomes available. Companies don’t have the foresight to predict every economic event that could affect the bottom line and, therefore, the CFO’s bonus. But that discretion should have limits, Rosen said.

“When an organization says to the CFO or any plan participant, ‘Eighty percent of your bonus is on operating income, and the other 20% is discretionary,’ the question is: ‘What does that really mean?’ ” Rosen said. “Is it based on individual performance, how clean the audit is, how fast the books are closed, how well we finance our debt? What is it going to be?

“If the [CEO or compensation committee] says, ‘I’ll know it when I see it and pay based on how well you do,’ you can expect a CFO to say, ‘What the heck does that mean?’ ” 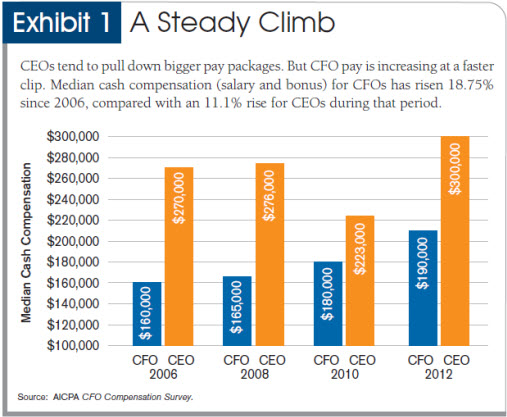 NOT JUST A CFO ISSUE

Other research backs up the notion that companies can be more transparent in how they reward employees.

A growing number of companies have formal performance rating systems tied to salary increases, according to a 2012 WorldatWork survey. But a slight majority of those that use the ratings to determine increases put that determination in the hands of managers. So, the process for a pay raise—whether a CFO bonus or first-year accountant’s merit increase—remains murky, often as much art as science.

“The more you communicate and the more transparent you are, the more people understand the compensation programs, and the more effective those programs are,” he said. “It’s important to have very well-designed plans, but, without communication, they’re fairly useless.”

August J. Aquila, who co-authored a book for the AICPA on pay for performance, said goal setting at the beginning of the year will add clarity to a compensation plan. The goals should be prioritized so that employees know what to focus on most. If employees see the metrics that make up the compensation plan, then they can see whether the plan is fair. “If the plan is too subjective, then they could feel it’s not a fair plan because they don’t know what they’re supposed to do,” he said. “When you’re more open with employees, they’re going to trust you more.”

The AICPA survey recommends three steps for companies to curb subjectivity in determining a CFO’s bonus:

Greater use of objective nonfinancial targets. Michal Matějka, a professor at the W.P. Carey School of Business at Arizona State University, says that using a measure such as customer satisfaction, market share, or clicks to the company website can be effective. “You tell people at the beginning of the year, this is the expected level of performance,” Matějka said. “They know what the game is. They know what’s expected, and they know whether they’re on track. They may not meet it, but at least they know from the beginning how the bonus is going to be constructed.”

CFOs also were more likely to be involved in decision-making in companies that used explicit nonfinancial targets in determining bonuses.

Greater involvement of corporate boards in determining CFO compensation. When boards have a say on executive pay, CEOs are expected to put more structure into a CFO’s incentive plan.

“The results suggest that active influence of the board of directors on CFO compensation may have some benefits,” the report said. “Greater influence may possibly result in a greater interaction between the board and the CFO, which may in turn elevate the CFO position and allow for a greater involvement of the CFO in major business decisions.”

Greater interaction between the board and CFO may be important in terms of governance. The interaction “may strengthen the importance of CFO fiduciary duties in safeguarding the integrity of financial reporting and assuring that the board has timely access to unbiased financial information,” the report said.

The use of bonus pools, which are funded only after specific company financial objectives are reached. “You specify in advance what the conditions are for bonuses to exist,” Matějka said. An example would be that any money above a certain benchmark for profit would be used to fund a bonus pool for executives.

The size of bonus pools is tied to financial performance; the better the performance, the bigger the pool. The survey found that 38% of private companies used some form of bonus pool.

Compensation for finance executives in the United States is on the rise, according to an AICPA survey. Compensation (salary and bonus) for CFOs has risen nearly 19% since 2006, compared with 11% for CEOs, presidents, and COOs (see Exhibit 1). CFOs have expressed dissatisfaction about the portion of their bonus that is determined subjectively.

Companies can limit subjectivity in several ways. The survey suggests that subjectivity can be limited by a greater use of nonfinancial metrics; a greater involvement of corporate boards in determining CFO compensation; and more reliance on bonus pools, which are funded only after specific company objectives are reached.

Performance Is Everything: The Why, What, and How of Designing Compensation Plans (#PPM1206P, paperback; and #PPM1206E, ebook)