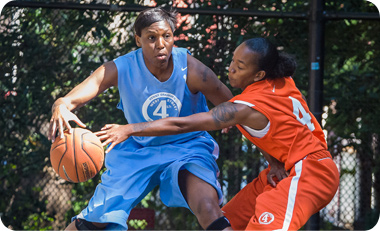 I played college basketball at Seton Hall and finished in ’98 with my master’s in business management with a concentration in accounting. After I graduated, I played every day. Basketball was a part of who I was, so I played on semipro teams, traveling teams, and recreation teams. I played on the teams that play at various colleges for preseason exhibition games. So I was never disconnected from it. I was always training.

In April 2000, I attended a tryout for the Indiana Fever, which was beginning its inaugural season as a WNBA expansion team. About 200 women participated in open tryouts. I was the only one who earned a spot on the team. I was working for PricewaterhouseCoopers in the New York office, and I took a leave of absence in the summer to play. When we came to Madison Square Garden to play New York, people from the office came in huge numbers. Even people I’d never met, they just heard I was playing, and they were there cheering. I didn’t get to play in that game, but they had such a good time just watching it. A lot of them had never even seen college women’s basketball. But to see women’s basketball up close at that level, they’re like, “You all are just phenomenal. We just didn’t think you had that ability.” Sharing it was a blast, and I went out with people afterward to celebrate.

I was with the team one full season, and in preseason right before the second season, I tore the anterior cruciate ligament in my knee while playing in a recreation league to stay in shape. I was very fortunate because the Fever paid for my surgery and treated me like I was part of the team while I was rehabilitating. Obviously, I couldn’t travel because I wasn’t officially on the roster, but I went to all the practices, all the community events. And then the next year there was a coaching change, and skill sets change. I came back, but the opportunity didn’t present itself again. And I tried to get back into the league for a couple years after that, but as you get older, it becomes harder and harder to train for that level of basketball. When you’re an athlete, your sports career is only going to last for so long. So I decided to move on and put my energy into work.

I’m playing a dual role right now for Ericsson as a project financial manager in Atlanta. I’m transitioning to be a full team lead on a particular account, but I’m also a team member who supports project managers in their day-to-day project operations. I make sure we review their financials, make sure they adhere to their budgets.

My experiences in basketball helped me a lot in my career as a CPA. Obviously, whenever you’re in a competitive environment, it prepares you. There are good days, and there are bad days. There are days when you are the top performer, and there are days when you’ve screwed up and made a mistake. Sports should teach you how to own up to them, how to go about correcting them, and how to move forward.

I was a hardworking, well-conditioned player, so when I was in a tryout and people got tired, I was just getting started. It’s like that at work, too. You pace yourself. You prepare and you go for it. I still do that. That’s the only way I know how to be. I’m always trying to be one step ahead.

—As told to Ken Tysiac, ktysiac@aicpa.org ,
a JofA senior editor.