Automated substitutes for return drop by half

The ASFR program uses information returns including Form W-2, Wage and Tax Statement, and the Form 1099 series, plus other internal data, to prepare a return for individuals who appear to owe a significant income tax liability for one or more tax years but did not file a return. The IRS then issues a proposed assessment (Letter 2566) informing taxpayers they must file a valid return, consent to the proposed assessment, or appeal it within 30 days. Taxpayers who do not respond receive a statutory notice of deficiency.

In her 2012 Annual Report to Congress, National Taxpayer Advocate Nina Olson noted the decline in ASFR activity, attributing it to workload issues and a new practice of limiting the number of returns assessed at one time on the same taxpayer. The IRS no longer makes an ASFR assessment on a taxpayer who has a balance due for another tax year, she said. Olson called these “prudent business decisions,” but said the IRS has not made needed changes she recommended in her 2011 report, including contacting taxpayers before making assessments and not making them where the IRS has no confirmed address for a taxpayer. Olson has also criticized the program previously for what she said is its questionable effectiveness, in that it artificially inflates assessments without determining their collectibility.

An audit of the program in 2010 by the Treasury Inspector General for Tax Administration (TIGTA) (Rep’t No. 2010-40-033) revealed that, because of limits in staffing and other resources, the IRS in fiscal 2006 and 2007 worked only 68% of the 2.7 million cases in the program’s inventory for the two years combined. TIGTA noted some success, however, in bringing taxpayers into compliance in filing and paying. For fiscal 2005, nearly 450,000 taxpayers, representing more than 580,000 returns, voluntarily filed returns, accepted the substitute for return, agreed with proposed assessments, or were identified as not liable. Of those returns, 49% showed some type of payment or other account activity. Of those in which taxpayers agreed with the assessment or filed a return, 68% of accounts were fully paid.

Both TIGTA and Olson noted favorably the IRS’s increased use of “soft notices.” TIGTA said a 2007 pilot initiative showed some promise in reducing the ASFR caseload. Olson said a plan for an additional delinquency notice in fiscal 2013 could have the same effect, plus confirm taxpayer contact information before ASFR processing. 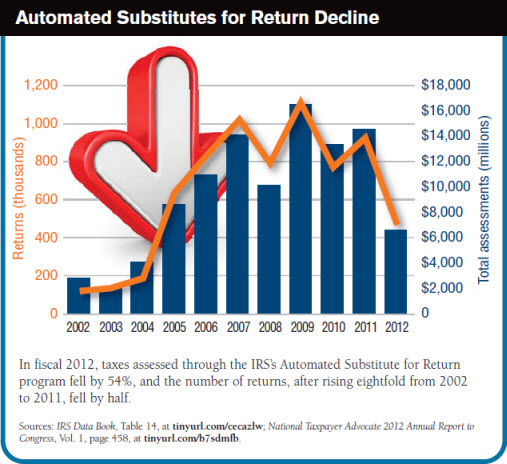