Q: How can we tell if our internet service provider is delivering the internet speed we are paying for?

A: There are many web-based internet speed tests, but use caution: Some so-called “speed tests” also install malware on your computer. For this reason, I like to use reputable speed tests such as the one provided by Xfinity at speedtest.comcast.net. Just visit the website and click on a server on the U.S. map under the “Speed Test” headline. The tool then will test the speed of your internet connection to that server. In my test, I scored a download speed of 11.99 megabits per second (Mbps) and an upload speed of 4.19 Mbps. 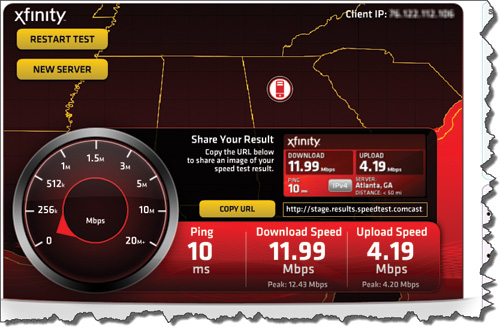 Note that by clicking the NEW SERVER button, you can test your internet speed to various locations throughout the United States. Generally, the farther the server is from you, the slower the internet speed is because the data must pass through more routers, and each router represents a potential bottleneck.

The Xfinity test does not install any software on your computer, and it works almost instantaneously. The test is performed by pinging the server 10 times, then averaging those times to determine the final result. (The Xfinity speed test measures the performance for any internet service provider (ISP), not just Xfinity.)

I recommend you use the Print Screen key or the Windows Snipping Tool to capture the report and paste it into a Word document saved as “Internet Speed Tests.” Repeat this test periodically and capture the results to document your internet speed. These test results will help you determine whether you are receiving the internet speed you are paying for, and over time allow you to detect any changes in speed. Because each new ISP customer in your locality shares the same bandwidth and routers, your internet speeds eventually may decline. If this happens, you should ask your ISP to upgrade its capacities in your area to restore the contracted internet speeds (I admit that I have done this myself, multiple times). Use the following table and bar chart to evaluate your reported internet speed:

Note: The Xfinity speed test uses Flash, which is not supported by Apple’s iOS operating system. Apple iOS users should use the speed tests at att.com/speedtest or speedtest.net.