The long-term effect of doing more with less: Doing less 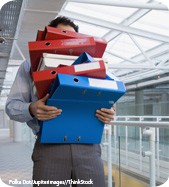 Those who have worked for a company that struggled during the recent financial crisis know the scenario all too well: To cut costs, the business lays off workers. The survivors are grateful to keep their jobs and assume extra duties to keep things humming. Experts are now taking a closer look at the long-term effects of doing more with less. And some, including Ron Rael, CPA, CGMA, founder of the High Road Institute leadership consulting firm, are finding that the new pace can’t last forever.

“We’ve been running so lean for so long that it’s starting to hurt companies profitability-wise, morale-wise, culture-wise,” said Rael, an author whose published works include The Traits of Today’s CFO: A Handbook for Excelling in an Evolving Role. “And, more importantly, employees are starting to get burned out.”

Many employees can’t physically sustain the pace at which they have been working during the downturn, and productivity is bound to fall as a result, he predicts. In addition to decreased productivity, companies may be facing increased medical costs to repair the bodies of weary employees who have worked too many 50-, 60-, and 70-hour weeks.

Hiring new employees to relieve overburdened workers can be difficult to justify because growth still seems uncertain for many businesses. Executives participating in the CGMA Global Economic Forecast survey for the third quarter predicted in aggregate a staffing level increase of just 0.7% over the 12 months following the survey.

So in the meantime, fear of layoffs—not hope for hiring—may continue to drive productivity trends in the near term, and that adds another wrinkle to this conundrum.

Excessive workloads are top drivers of stress. Stress can breed sickness. But the fear that keeps people productive also keeps them from staying home when they have the sniffles.

Sick and anxious workers are, not surprisingly, less productive. Companies that fail to emphasize at-work wellness, a broad topic that includes telling sick employees to stay home, are shown to have higher health care costs and lower productivity.

MISMATCHES ... AND AN EXODUS?

In addition to heaping more responsibilities on workers, layoffs often saddle employees with duties that do not match their skills—duties that previously were handled by their downsized colleagues. And where there’s a mismatch, there’s more stress, unhappiness, and the potential for less productivity.

“You’re going against what’s natural for you to do, and along with possibly not liking it, the employees are thinking, ‘I can’t lose my job. I’ll do whatever they want,’” said Cathy Sexton, owner of The Productivity Experts consulting firm. “And you just can’t sustain that for a long period.”

The most dedicated, valuable workers are the ones who suffer the most when companies try to do more with less. When companies choose not to hire to save money, Rael said, they are deferring a cost.

“The cost is the impact on their existing employees,” he said. “And that cost is starting to catch up with them in terms of the toll on health, in terms of productivity, and in terms of their employees’ willingness to seek out new ideas, embrace new technology, [and] embrace new concepts. … Because they don’t have the time or the interest to do it.”

For more, including tips on how to prevent workforce burnout and how to best do more with less, please read:

“Can Productivity Rise When Employees Already Are Stretched Thin?” by Ken Tysiac