Q: We frequently need to select samples of populations for test of transaction work when auditing or reviewing client financial data. Currently, each staff member uses his or her own sampling method, some of which seem to produce skewed results. We would like to deploy a consistent sampling method using Excel, but we are frequently faced with producing a single sample from multiple populations of different sizes, and we want to produce unbiased samples. Can you tell us how we might accomplish this in Excel?

A: It is possible to produce an unbiased sample from multiple population ranges in Excel using either the Rand or Randbetween functions, as follows. For both examples, let us assume that you want to select 30 random invoices from the following three population ranges—invoices numbered 2232 through 3723; 4000 through 5709; and 6400 through 8727.

Rand Method
Start by listing all invoice numbers in a single column using Excel’s Fill tool, as follows. Enter the value 2232 into Excel (cell A4 in this example), and then from the Home tab, select Fill, Series, and in the Series dialog box select the Columns radio button, enter 3723 as the Stop value, and then click OK. 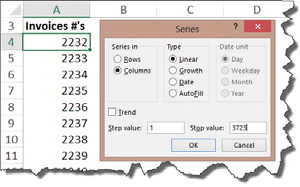 In the adjacent column enter the function =RAND() (cell B4 in this example), and copy it downward so that each invoice number has its own corresponding random number, as pictured below. 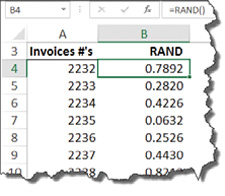 To prevent the values from recalculating further, convert the random numbers to values by selecting them, then copy and paste them to the same location as Values. Sort the data according to the random numbers and select the first 30 numbers from the top of the list as your random sample (shown below). 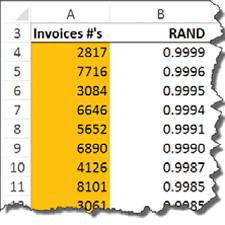 Next, create a columnar table for summarizing the 30 random invoice numbers, and in the first column (cell H3 in this example) enter the formula =RANDBETWEEN(1,100)/100, and then copy it downward to fill 30 rows, as suggested in the image below. 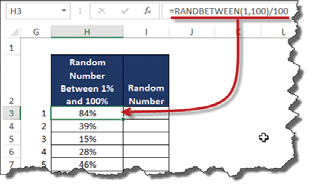 These formulas will generate 30 random values between 1% and 100%, to be used in the next step as a basis for randomly selecting invoice numbers from the three populations, according to each range’s respective size within the total population. (The general idea, for example, is that values from a range representing just 10% of the total population will have only a 10% chance of being selected.)

In the adjacent column (cell I3 in this example), enter the following formula:

While this formula may appear intimidating, it simply contains three Randbetween functions, each designed to generate random invoices numbers from one of the three population ranges, depending on the random numbers (from 1% to 100%) generated in column H.

For example, as shown below, the formula in cell H3 produces the random percentage of 8%. Based on this result, the Randbetween formula in cell I3 generates a random invoice number from within the first population range (2232 and 3723), because 8% falls within the 1% to 27% range. 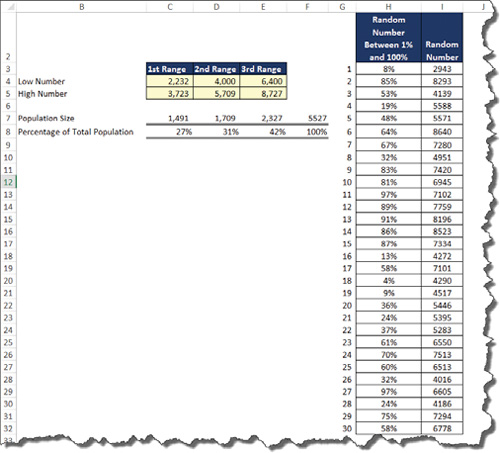 Copy the Randbetween formula downward to complete the table (shown below), and then convert the entire table of random numbers to values by selecting them, then copying and pasting them to a new location as values.

Although this second method is more complicated, once it is created, the Excel template can be used repeatedly by entering the population ranges in the yellow highlighted cells. Download this workbook at carltoncollins.com/random.xlsx.

Note: To select a sample of random items from a list of text values (e.g., customer names) or a list of nonsequentially numbered items, list the population in Excel and number them sequentially in an adjacent column, then apply one of the methods described above to the numbered column.